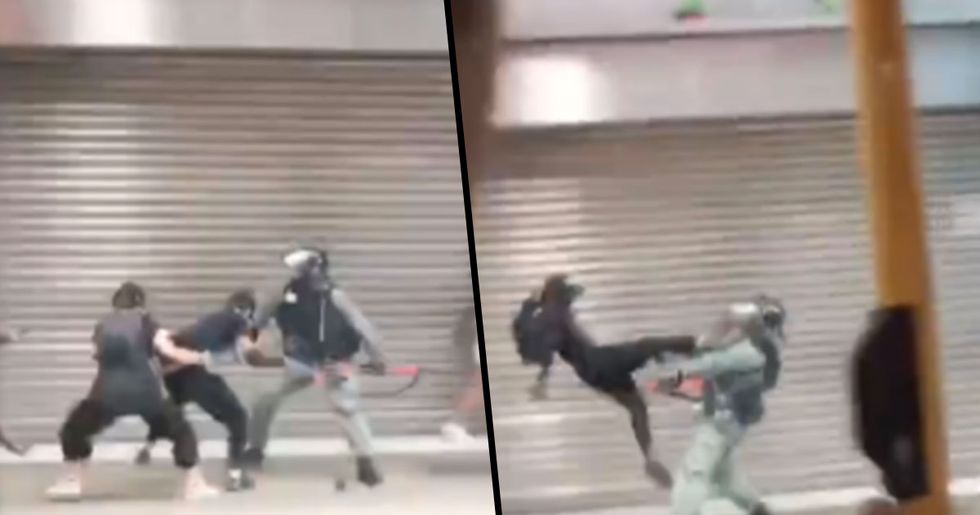 And the last 10 weeks, in particular, have seen increasingly violent clashes between protesters and police - airports were forced to suspend hundreds of flights as a result of these protests.

As protesters in Hong Kong remain unwavering and defiant in their beliefs, tensions are beginning to run high across the rest of mid-land China - so high, in fact, that the Chinese military seems to be preparing for the very worst.

Protests were already pretty violent, but recently, a video emerged online showing a protester fly-kicking a police officer and it has gone viral... keep scrolling to see the footage.

And now with this new footage that has gone viral, we can see the extent to which protesters are going to in order to make their point heard.

A video of a protester fly-kicking a police officer made global headlines.

Dressed as something closely resembling a ninja, the protester appeared on the scene as another one of his fellow squad members was being tormented by an officer with a baton and shield.

He didn't just walk onto the scene...

He decided he was going to aim a flying-kick right for the officer's torso, in order to push him away from the other protester. This scene looked to be something out of an action-film as opposed to a riot in Hong Kong.

While some are commending the "ninja," others are reminding audiences that this situation is only going to get worse.

As tensions continue to rise, experts think that the violence can only get worse.

The authorities are taking these protesters seriously.

Chinese authorities, who recently denounced protests as “terrorist acts," have promised an “iron fist" response to the protestors. In this current climate, we can only hope that the issues growing within the conflicted country can only be resolved peacefully with no further violence or brutality.