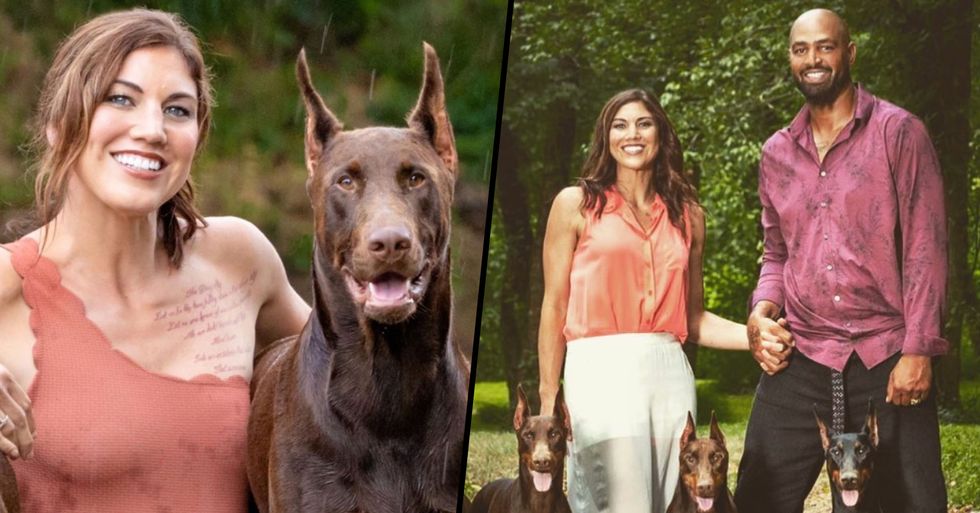 Hope Solo 'Brokenhearted' After Her Dog Dies From Shooting

Dogs fill our lives with unconditional love and understanding, it's true that they really are man's best friend, which makes it so hard to understand why anyone would want to harm them.

Hope Solo has had a traumatic couple of months, she hasn't just given birth to twins during the pandemic, but she's also had to watch the worst thing happen to her beloved fur baby, and people can't wrap their heads around the brutal attack.

keep scrolling for the full story and her heartbreaking tribute to pup Conan...

So why would anyone want to harm them?

Especially if they're lost and trying to get back to their owner.

All too often owners find their dogs shot or harmed after wandering onto someone else's land.

And that's exactly what former soccer goalkeeper Hope Solo has had to come to terms with after her pup escaped.

Lockdown has been a stressful time for us all...

Can I just say to all my family, friends and followers that in this most stressful and difficult of times we someti… https://t.co/EyTwLxvOLb
— Tom Ross (@Tom Ross)1589799072.0

However, the World Cup champion and two-time Olympic gold medalist hasn't had it easy over the last few months.

In fact, she has been hit with intense ups and downs.

Captioning the picture: "What have we been doing during our time in quarantine? Well, as you can see, we've been incredibly busy."

You'd think giving birth to twins during a pandemic would be the worst thing a mother could possibly have to go through...

Sadly that wasn't the case.

The soccer star took to Instagram on Saturday to express her heartache over their tragic loss.

She shared that he was shot just a few yards outside of her property.

On Friday, Solo told her followers that he was in a critical condition, which got a couple of heartless comments.

Sadly, things only went downhill from there...

They had bought 60-acres with their home in order for their dogs to have enough space to "live their most full lives."

Hope commented: "Conan was kind and loving. He wandered 30 yards off our property when he was shot. As animal lovers we are struggling to make sense of anyone using their right to own guns to shoot pets of any kind."

They have always strived to give their dogs the best life.

She added, "We have had pets come onto our property and always helped them get home safe.‬"

They were struggling to come to terms with this blatant act of cruelty...

"Our magnificent dog Conan (brown, on the far left) is in critical condition after being shot last night." she wrote on Instagram. "It's hard news to share, but harder to make sense of this heinous act."

They did all they could for the pup.

"Jerramy and I are shocked and heartbroken, but we want to say thank you to Wilkes Veterinary Hospital and their staff for rushing Conan into emergency care, as well as their [virus] care practices."

She appeared hopeful that Conan would make a full recovery.

Adding, "We've heard that there are developments in canine prosthetics and would love any information about getting Conan a new front leg!"

Sadly he took a turn for the worst and passed away just a day later.

The couple has been avid dog owners for a long time, before Conan's passing they cared for 5 Dobermans, which is no mean feat.

"We‘re brokenhearted to share that Conan passed away from blood loss last night," Solo began her latest caption. This prompted thousands of replies from well-wishers...

"He fought up until the very end.‬ We're crushed. Just a dog running through the woods, trying to make his way home."

Take a look at her heartbreaking tribute below...

We can't imagine what Hope and Jerramy must be going through, but hopefully, they can get justice for Conan. If you need something a little more uplifting, keep scrolling to watch how these dogs have saved forty-five rhinos from poachers!