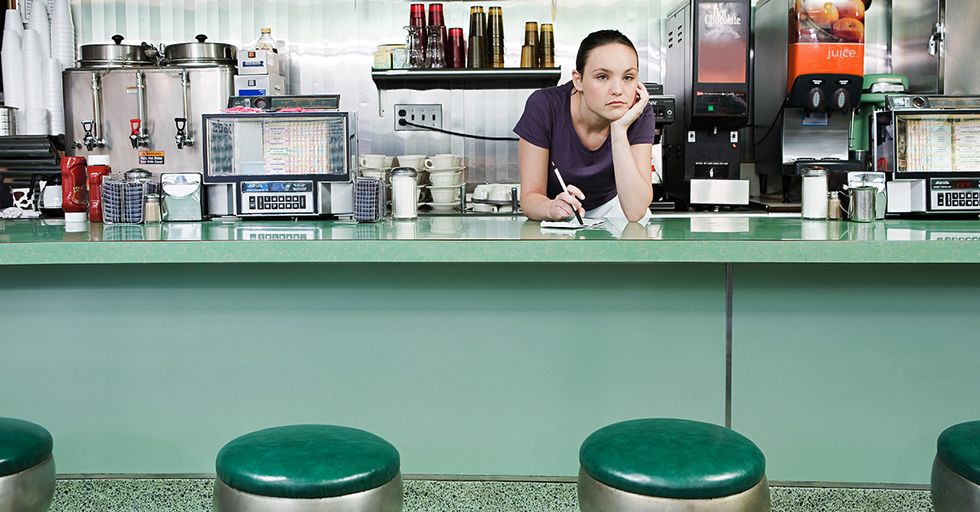 Reasons Why Working in a Restaurant Can Sometimes Be the Worst

If you've ever worked as a server at a restaurant, you know the struggle is real.

The hours are long, the pay is crap, and the customers can sometimes be the absolute worst.

It's a tough job.

People who haven't worked in the food service industry just don't get it. But you do. Here are 19 struggles every single server has experienced at work.

Wishing for a snow day.

There's no such thing as a snow day when you work at a restaurant. People still have to eat, and that means you have to be there to cater to their every whim.

You can never have enough pens.

'Cause they're all going to be stolen. Every single one of them.

You will forget a table every now and again.

Because your brain is running at a million miles a minute trying to remember table four's drink orders straight, grabbing table seven's extra napkins, and checking to see if the bar has your cocktails for table three. This next struggle is one that may surprise you.

Your money is always all wrinkly!

Who knows where customers get their bills from? Sure, they all spend the same, but they can't all be used at the self-checkout.

Some customers are just straight-up d*cks.

We've all been put in this awkward situation.

If there's only one piece of advice I could impart to restaurant goers, it'd be this: If someone asks to see your ID, just give it to them. If they don't ask, just drink your drink and shut the heck up about it.

On the bright side, you'll (hopefully) make more money. On the negative side, you will be twice as tired and miserable by the time you finally leave.

Customers are SO FUNNY.

Wow, never heard that one before, what a great joke! Please just leave.

Why do people think it's OK to touch you?!

Apparently, when you're trying to get someone's attention, you can just reach out and grab them like they're one of the flags from Double Dare. Good to know!

I'm firmly convinced that there are some people put on this Earth whose sole purpose is to test the patience of others. Try not to let them get to you.

This is always a delicate situation.

You could use more money. But you really, really want to leave. Share this with a fellow server!