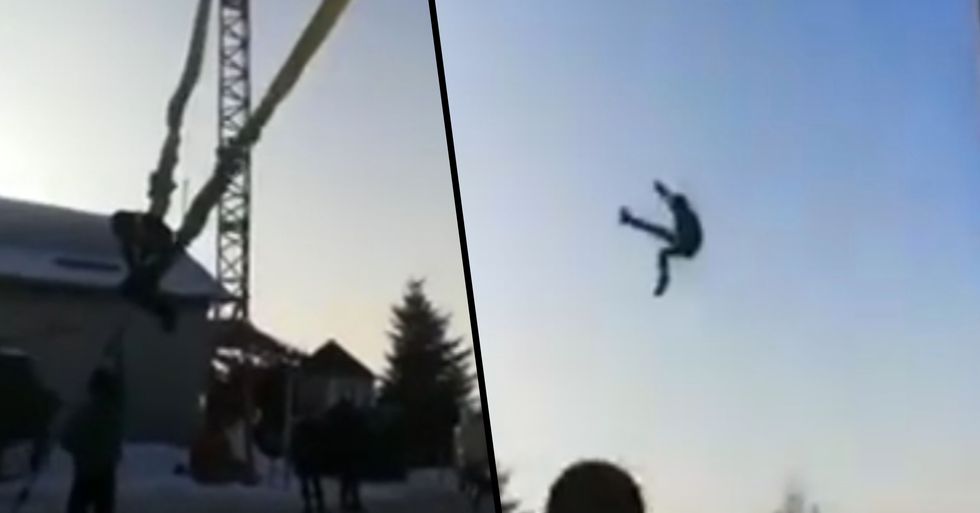 Horrifying footage has emerged from Kazakhstan this week of a young boy being flung from a malfunctioning bungee ride.

The incident, which happened at a fairground last Thursday, was caught on camera and quickly went viral.

Keep scrolling to see the shocking footage, and to hear the extent of the teenager's injuries...

Funfairs are supposed to be a place of, well... Fun.

It says it in the name, for goodness sake!

The good, old fashioned fairground has always been a firm family favorite...

What's not to love about them, seriously?

Fairgrounds play home to a variety of different attractions...

Retro games, performers, an endless supply of candy and other sweet treats...

Oh, and there are always plenty of rides.

It's what most people flock to the fairground for - The rides and the rollercoasters.

Thrill-seekers head straight to the rides for their adrenaline fix...

Despite the substantial safety risks this kind of experience brings with it.

But, there's one thing that even the most adventurous of people fear...

It's the dreaded bungee.

The bungee is simply terrifying.

Being strapped into 2 elastic strings that hurl you, sometimes hundreds of feet, into the air? It's a no from me.

And you just can't help but picture those strings snapping...

Or being flung out of your harness while you're plummeting into the sky - It's everyone's worst nightmare.

Well, this nightmare sadly became a reality for one unfortunate adrenaline junkie.

A thirteen-year-old boy from Kazakhstan was riding a bungee ride at the Kok Tobe recreation area in Almaty last week when disaster struck.

The ride suffered a massive malfunction...

And subsequently hurled the young boy from the safety harness and straight into the air.

Reports are saying that the incident didn't prove to be fatal...

But the teen suffered some pretty severe injuries as a result of his fall.

It all seemed to be going so well.

The young boy can be seen being secured into the harness. So far, so good.

As the bungee is activated, it is promptly evident that the teen hasn't been fastened in properly, as his body instantly hurtles away from the ride.

He breaks free from his harness...

And is hurled around twenty foot into the air in front of a crowd of horrified onlookers.

It all happens very suddenly...

And the speed in which he travels is simply sickening.

He can be seen turning in midair...

But continues to ascend even further.

He suddenly begins to descend...

And lands harshly on the ground at a tremendous speed.

At first, the people watching the incident are seen standing motionless...

And evidently in shock. But, gradually, people begin running towards the youngster, who is now lying motionless on the ground.

The young boy was rushed to the hospital...

And, though he is in a stable condition, he suffered some pretty serious injuries. Abai Kusainov, head physician of the Center for Children’s Emergency Care, told reporters: "After the examination, our doctors diagnosed the boy with a fracture of four lumbar vertebrae, a fracture of the left radial bone with an offset, fractures of both ankles and of the left lower leg, a fracture of the talus of the left foot with a displacement."

But the park are facing no charges for the incident.

According to local police, the young teen suffered the fall off the ride "by his own negligence and his parents have no complaints against the park administration." You can watch the horrifying incident above, though be warned: The footage is incredibly distressing. In this instance, it was a miracle that no one was more seriously injured. However, it isn't always the case. Keep scrolling to read about a different ride malfunction, which ultimately took 2 lives...