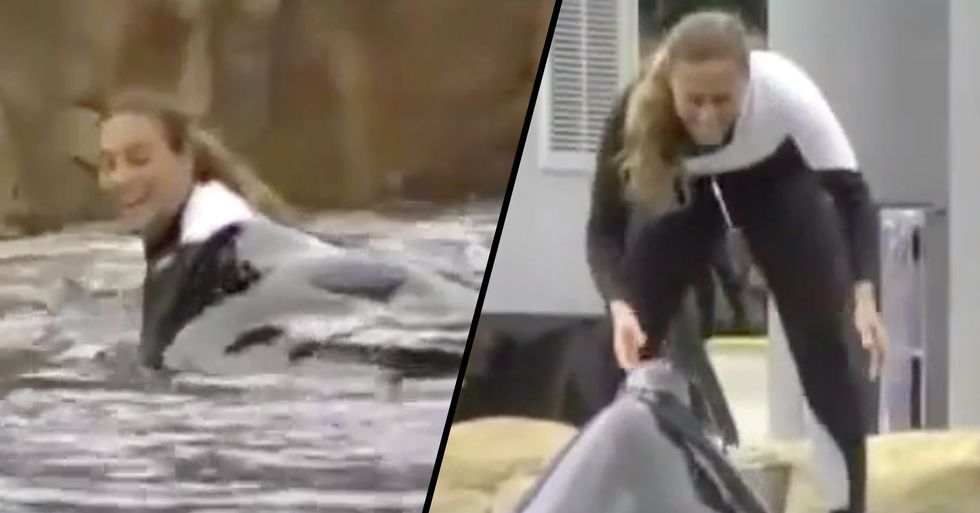 If there's something that we all share, it's an unconditional love for our beloved sea mammals. Dolphins and whales are two of the most popular sea mammals, and their intelligence and respective gentle nature is what makes them so lovable.

For years, these popular creatures have been kept in tanks that are too small for them so that they can suitably entertain us humans. Keeping these sea creatures in captivity and making money off their performances in front of huge audiences has sadly become common practice, mostly thanks to SeaWorld resorts around the world.

In recent times, however, protests have been made regarding the captivity of these intelligent sea mammals, and it appears that the consistency of these uproars is beginning to take effect. Fewer people are visiting Seaworld's resorts every year, and many travel companies have publicly boycotted the parks.

It has been 10 years since trainer, Dawn Brancheau, was drowned by the captive killer whale, Tilikum. But her tragic death has paved the way for future conservationists.

Keep scrolling to find out how...

Dolphins and whales are the most popular sea mammals held in captivity.

Since the 1960s, whales and dolphins have been kept in captivity and have been forced to perform to audiences of hundreds of people, all to make money for the companies keeping them in their confinement.

As well as whales, dolphins have been used in captivity for many years for the purpose of human entertainment. SeaWorld, which has 3 parks in the US and one in Dubai, made the captivity of these mammals popular in the amusement park industry and has featured whales and dolphins in performances since its first few years of opening in the 1960s.

Since SeaWorld opened in 1964, a total of 200 orca whales (killer whales) have been taken from the wild and put into captivity; 166 of these orcas are now dead. At least forty-nine orcas have died at a SeaWorld park.

These intelligent mammals are kept in underwater prisons.

As a likely consequence of their intelligence, dolphins and whales are trained and forced to adopt traits that are usually considered unusual in their species in the wild. For instance, dolphins are trained with food to learn their tricks, but this training involves food deprivation. They are also trained to present their tails and remain motionless for regular blood draws, which is obviously not natural.

The things that these whales and dolphins are trained to do are completely unnatural.

Dolphins and whales swim up to a hundred miles a day in the wild; whilst in captivity, the space that they are kept in is the equivalent to a bathtub. What on earth is humane about that?

Since 2013, 4 humans have been killed by interacting with orca whales. All of these incidents happened while the whales were kept in captivity. Three of these incidents involved the same orca, Tilikum, who was held in captivity by SeaWorld. Tilikum drowned 2 of his former trainers by dragging them to and holding them at, the bottom of the tank, and he also killed a local man who broke into the park and entered the tank late at night.

Today marks 10 years since the SeaWorld trainer was killed.

Dawn Brancheau was drowned by a captive orca at the park in Florida.

But it's not just the anniversary of her death...

February the 24th 2010 is also the day that SeaWorld changed forever.

She was the face of SeaWorld before the tragic incident.

The forty-year-old was a senior trainer at SeaWorld.

She was dragged into the water and killed by Tilikum.

However, she didn't just drown, she also suffered serious injuries.

It came out that blunt force injury also contributed to her death.

Her arm was torn from the socket and she was scalped.

Bits of hair and skin were found at the bottom of the pool.

It was later discovered by the post mortem that she had a severed spinal cord, broken ribs, and a broken jaw.

Dawn and Tilikum had built a "great relationship."

John Hargrove, a senior trainer at SeaWorld, spoke about the tragedy.

Dawn's death has created a whole deal of change at SeaWorld.

No trainers can perform in the water with the captive animals.

This caused a ripple of change in the show.

Starting at the beginning of this year, the new orca show now focuses on conservation.

This show is called "Orca Encounter."

It looks into the conservation of ocean ecosystems, and where the killer whales fit into it, as well as the importance of the animals' welfare. SeaWorld merchandise is now practically non-existent. However, watching one of the shows, it appears to be just another money-making scheme, with the orcas still used for entertainment.

It showed Tilikum's life in captivity, and accused the park of abusive behaviour. SeaWorld has since been ordered to pay $65 million back to investors after insisting the documentary had no negative impact on attendance.

A delegation of conservation experts from the U.S. including SeaWorld’s Chief Zoological Officer Dr. Chris Dold are… https://t.co/j3eOeDoM6n
— SeaWorld (@SeaWorld)1581608888.0

Understandably this caused the park to deteriorate. Tragically it took the death of a passionate trainer for any change to be seen. Thankfully change is finally taking place, and her memory will live on through future conservationists.

This generation of captive whales and dolphins needs to be the last.

And it is fantastic to see so many companies joining the fight against this blatant animal cruelty.