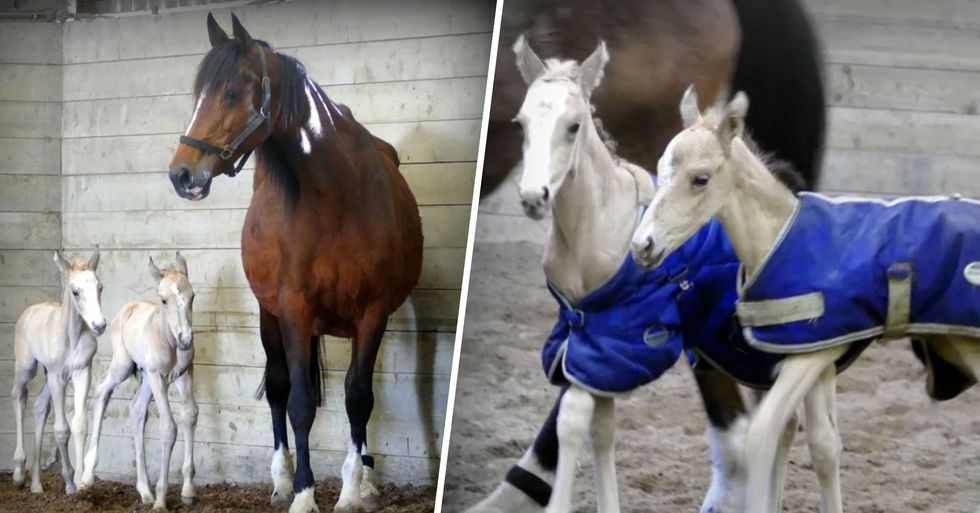 A remarkable horse has defied all odds by giving birth to twin foals not once... But twice, and all in the space of 2 years.

Now, horses are usually unable to carry more than one offspring at a time, so this mare really deserves a pat on the back. Keep scrolling for the full story, and to see the adorable photos of the mischievous duo...

Foals are the pure additions to the world that we all need right now.

A tiny little horse stumbling around on wobbly legs... What's not to love?

Foals are by far the more energetic babies of the animal kingdom.

They wobble onto their feet (or hooves...) mere minutes after birth, and are able to keep up with their herd within hours.

And they're incredibly playful.

One of the most loved things about these little creatures is their mischievous nature.

They thrive in social situations...

And can often be seen frolicking around with their rather bored-looking mother.

But this makes us sometimes beg the question...

Why do they never have any siblings to play with?

Typically, horses are unable to have multiple births...

And usually carry and give birth to just one foal at a time.

While most mammals routinely give birth to multiple healthy offspring from one pregnancy...

Horses, much like us humans, only have the capability to successfully carry one offspring at a time.

Horses struggle to keep more than one fetus healthy...

And, in the unusual instance of twins occurring during fertilization, one of the embryos will usually abort itself within the first 6 weeks. It all sounds quite grim, doesn't it?

So, yeah, the chances of cute horsey twins are pretty slim.

But hey, that doesn't mean they're impossible.

By having twin births twice.

Yep, this mare really has done the impossible.

The mother horse, named Destiny, lives on Gasson's Farm Stud, which is run by breeder, Tania Mackee, who specializes in breeding sport horses.

The nineteen-year-old mare comes from a family of top show-jumping stallions - though her latest achievement may just blow all of them out of the water.

Just eighteen months after having her first set of identical twins, Destiny has again given birth to 2 adorable foals.

The chances of her successfully birthing two healthy foals in one go again are still incredibly rare.

But here they are.

Speaking to the Daily Mail, she said: "It's amazing. I've been breeding for years and years and I've never heard of something like this before. It was surreal."

During her pregnancy, Destiny's scans only detected one fetus...

Which Mrs Mackee said was a "mystery", as it also happened with her last twin pregnancy.

This will be her last pregnancy, as Mrs. Mackee has made the decision to officially retire her from breeding.

It would be dangerous for her to continue having offspring.

Dr Charles Cooke, a veterinary surgeon, and director at Equine Reproductive Services explained: "Twins are rare and they're rare for a reason. The horse is anatomically designed to be able to carry one fetus and then, after birth, to support one foal with milk and nutrition."

As for the twin foals?

Well, they are currently enjoying their foal-hood before they get trained to be professional sports horses. For more on the mischievous nature of these animals, keep scrolling to read about the horse that would play dead whenever someone would climb on his back...