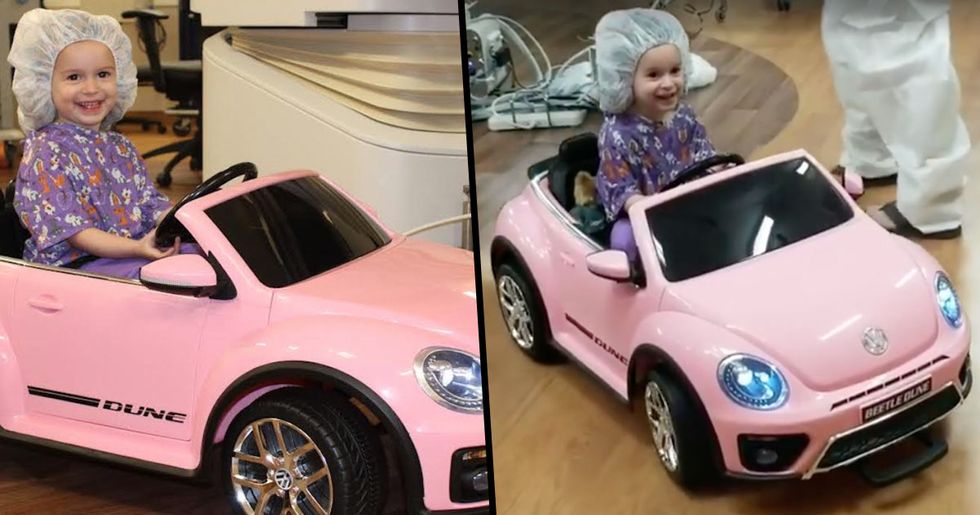 Being in the hospital can be stressful for anybody. Try to imagine how anxiety-inducing it must be for a little kid. I can't even fathom how a little kid can deal with the stress of facing life-threatening surgery.

Fortunately, people working in children's hospitals are amazing and are constantly coming up with novel ways to cheer the kids up. Distracting a child from the precarious situation that they are in can be a real challenge. A stuffed-teddy won't make them forget about the wires sticking out everywhere.

Kids will miss their bedrooms, their friends, normality. This is why treating a child in the hospital to something out of the ordinary can be just what the doctor ordered. Literally.

Continue reading to discover some of the great ways children's hospitals have made poorly kids smile.

The mini-cars to drive into surgery really are a great idea!

Children need a chance to be creative.

Being stuck in a hospital all day can drive a kid up the wall. Having the opportunity to do a bit of arts and crafts can make the world of difference to a kid's experience.

More and more children's hospitals are installing movie theatres. This allows the children a chance to forget about their condition for a little while through the immersive power of cinema.

You end up having a lot of your time on your hands if you're a kid in the hospital - which makes it the perfect time to learn an instrument! Obviously, bringing in a drum kit could annoy your fellow patients, but something like learning the ukelele is a great idea. Some hospitals employ people like Christina to teach kids on the ward how to play.

I mean, Spiderman can't cure cancer, but he can sure put a smile on a kid with cancer's face.

Whatever you think of Johnny Depp, you can't deny he's sweet to kids. Dressing up as his Pirates of The Caribean character, Jack Sparrow, Depp entertains many sick children.

Depp made going into surgery a little better.

I'm sure getting an operation would be much less scary with Captain Jack Sparrow at your side.

Who would you want by your bedside?

I think I would've been way too awkward as a kid to entertain a celebrity visiting me at the hospital.

Imagine if you had no idea who the visiting celebrity was!

They've come all the way from god knows where and they expect you to be over the moon but instead you're like... "er, mom, has Uncle Billy lost weight?"

I mean, Taylor Swift singing you a song would be pretty cool.

Now that's the kind of star you wouldn't mind reading you a bedside story. I mean she just seems to be a very down to earth, calming presence.

Being in the hospital can be a scary experience.

Any distraction is a welcome one. I mean, spending all day staring at the walls and at your stressed-out parents would put any kid on a real downer.

Sometimes mom and dad can just make you feel worse.

They mean well, but they're just as worried as you are. Stress and worry can lead to word vomit and saying the wrong thing.

How cute are these?

Consulting with your doctor on a cold sterile examination bed is a thing of children's nightmares. Transforming the bed into a dinosaur makes the experience a much cheerier one. That is, of course, unless the kid-patient has a fear of dinos - in which case these bad boys might cause an unexpected spike in their blood pressure!

The latest idea to come out of the children's hospital ideas mill is about making a child patient's journey into the surgery room a little less daunting...

A pre-op nurse was the one that drove this idea into hospitals.

Kimberly Martinez, a pre-op nurse working in Doctors Medical Center in Modesto, California, suggested the electric cars after doing some research. She discovered that, by reducing the level and anxiety and stress in young patients,  the whole experience became a more positive one.

These electric cars have a lot going on...

These Mercedes and the Volkswagen mini-cars don't just stop and go. These machines are fitted with mp3 stereos that the kids can control from inside the vehicle. They have working headlights, backlights, and dash lights. And there's a horn! So get out the way, I don't care who you are... Jack Sparrow or not.

These mini-cars are being made available up and down the country for hospital patients aged 2 to 7 years old. What a wicked idea, eh? Achieving the funding to get these mini-cars into every hospital is a big feat. With generous stars like Keanu Reeves donating millions to children's hospitals every year, something like this might actually be possible across every hospital. Keanu donates millions to children's hospitals every year? That's right! Read all about the generous actor and his secret charity work below!