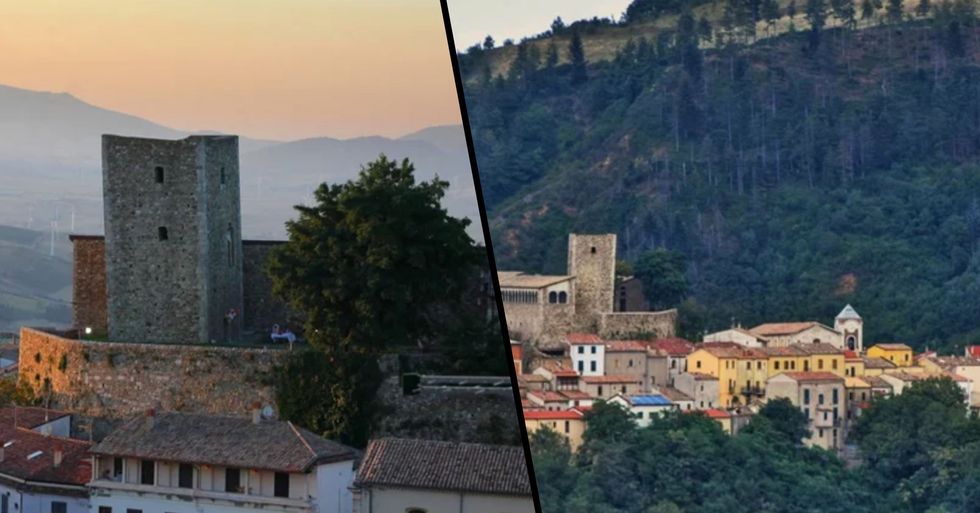 Houses Available to Buy in Stunning Italian Town for Just $1

Growing tired of our country's soaring property costs? Sick of being unable to afford your own house? Just want to live your best life in the best house? Well, the answer is out there... In a little town in Italy, apparently.

Yep, a beautiful Italian town is offering a handful of its properties for a mere dollar - And there's no catch! Well, there kind of isn't.

Italy is the place of dreams.

You're lying to yourself if you say you've never dreamt of quitting your job, packing up your belongings and running away to Italy to live out your days with copious amounts of wine, pizza, and pasta.

The European hotspot has so much to offer...

Did I mention that there's loads of wine, pizza, and pasta?

The country is full of breathtaking views and architecture.

So it comes as no surprise that it is one of the most visited countries in Europe, with over 63 million keen travelers visiting in 2018 alone.

There is something for everyone.

So, why haven't we all moved there yet?!

Well, while packing up and moving to an exotic European country may sound incredibly appealing...

It's a lot easier said than done.

It's no secret that Italy is an incredibly expensive country.

So, if you ever were to move there, you'd need a pretty high number in your bank account to support you along your way.

And most of us don't have an awful lot knocking around in the bank accounts.

It's sad, it's depressing, but it's the truth.

It's January, and most of us are completely broke.

And this means that we can only dream of moving to Italy and buying a house out there... Unless those houses happen to be going for a dollar.

Well, you may just be in luck.

Because there's a town in Italy that is actually selling off homes for as little as a dollar... Literally.

Yes, believe it or not, but there's a little more to Italy than Venice and Rome, and it's a hell of a lot cheaper.

Well, Bisaccia could be the new home for you...

Because this quaint Italian town, which is situated in the southern Campania region, is selling off ninety of its houses for as little as €1 - That's $1.11, for us.

A beautiful city with such ridiculous house prices... What's the catch?

You get everything that is stated on the tin - A full house, in the beautiful town of Bisaccia, all for a single dollar.

But, as for the houses themselves...

As beautiful as some of these historic homes are, it needs to be taken into consideration that they are in dire need of some TLC.

Buyers are expected to renovate the properties themselves before moving in...

And the town's deputy mayor, Francesco Tartaglia, has revealed that he hopes to regrow the community, which has been gradually dying out due to emigration and a series of severe earthquakes over the last few decades.

He hopes that tight-knit families will move together...

And will ultimately bring the small town back to life. Speaking to CNN Travel, he explained, "We face a very particular situation here. The abandoned [area] spreads throughout the most ancient part of the village. Forsaken houses are clustered together, one next to the other along the same roads. Some even share a common entrance."

He even hopes that some people will buy more than one property...

In an attempt to have a real impact upon the town. "That's why we welcome families, groups of friends, relatives, people who know each other or investors to join forces. We encourage them to buy more than just one house to actually have an impact and breathe new life." I don't know, $2 might be a bit of a stretch...

Tartaglia has stressed that the buying process will be a smooth one...

And that there won't be any issues with the previous homeowners or third party property companies. Music to our ears!

And, as for the town itself...

He couldn't speak more warmly of it.
"Our folklore and traditions are the product of a picturesque combination of regions, we celebrate Carnival with local masks and have a variety of fairs and foods that embrace all regional traits. It's like getting the best of three regions in one single place."
"Newcomers here are pampered and taken care of. We want this place to shine again." But does Italy still not tickle your fancy? Keep scrolling to read about the remote island off the coast of Ireland that is looking fr 2 friends to live there... For free.