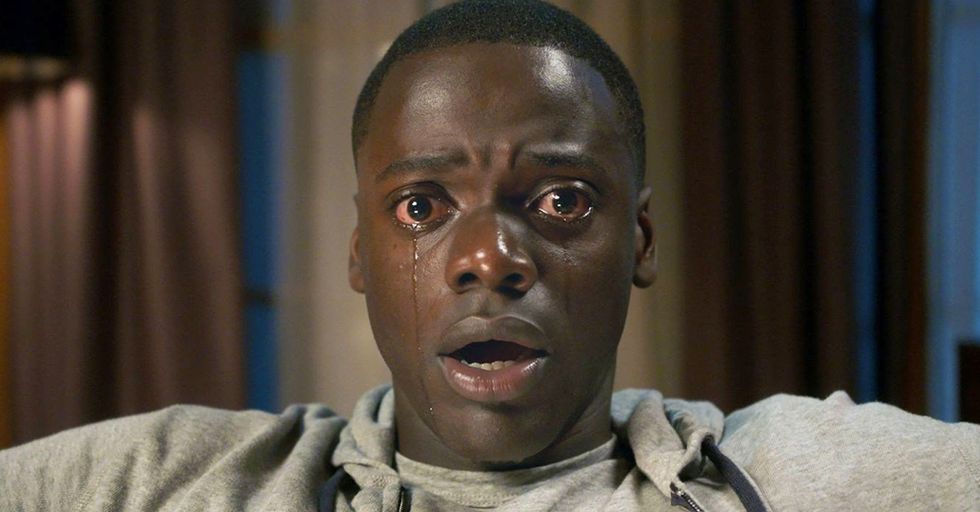 How Many of the 25 Most Popular Movies of All Time Have You Seen?

These 25 quintessential movies made us laugh until we cried, cry until we laughed, and ultimately changed our world view forever.

Hey, you! Yes, you. You're probably lying around half-watching Netflix while scrolling on your phone right now.

We get it. You've been inside for a long time. You're bored. You've been binging Bravo shows. You've been indulging in "background TV." But it's time to break out of the cycle and watch something better.

Here's your assignment: Click through this list of iconic films and write down all the ones you haven't seen yet.

Who knows, your new favorite movie may be on this list! Also, you might disagree with what we chose for number one, but that's not our fault...

Jamie Foxx (again) and Leonardo DiCaprio (again). This isn't the last time you'll see these guys on this list because they are amazing and everything they do is awesome. Django Unchained is a bloody Western movie that tells a bold and daring story. Truly a masterpiece.

Some people were skeptical of a sequel, especially one coming out so many years after the original, but as it turns out, the combination of Harrison Ford and Ryan Gosling together is pure magic. This movie really captivated fans with its remarkably stunning visual landscape and dark storyline. I am definitely not surprised it made the top 25. But I am a little surprised about this next one...

23. The Wolf of Wall Street

The tale of Jordan Belfort and the legacy of Leonardo DiCaprio. What a crazy mix. This movie is a whole lot of swearing, money, promiscuity, and Jonah Hill being Jonah Hill. Everything that makes for a Hollywood favorite.

Yeah, this movie left me speechless, so I'll let a New York Times reviewer handle the description: "Moonlight is both a disarmingly, at times almost unbearably personal film and an urgent social document, a hard look at American reality and a poem written in light, music and vivid human faces." Yeah. It's that good. Is the next one that good? You decide!

The year is 1999. Brad Pitt has spiky hair and everyone is talking about Fight Club, even though they know they shouldn't. Because, well, you know the first rule of Fight Club, right? Flash forward to today, and people are still raving about this great movie with its dark humor, epic performances, incredible soundtrack, and elaborate production design.

This is not your Superman hero movie that your children should look up to. One reviewer called Deadpool the "snarkiest of Marvel's comic-book creation." It's rated R for a reason but also is in the top 25 movies for a reason. This next one is a juicy crime drama with an A-list cast...

This is a total "holy crap" movie. The ending will leave you shocked, haunted, and absolutely terrified of falling in love. One of the creepiest, most insane movies and books, Ben Affleck and Rosamund Pike kill it with their dedication to the story.

This modern love story is scary beautiful because it feels almost too real. Fans grew a new affection for Scarlett Johansson, whose face is never shown in the movie, but the inflections in her voice and the authentic portrayal of connection left audiences in love and heartbroken at the same time. The next one is a major blockbuster, and part of a much-loved franchise...

Star Wars does it again. Many fans were skeptical of the new movies, and some still are, but this movie was as exciting as it was impressive to its fans, new and old. Plus, everyone loves BB-8.

Saoirse Ronan might be my new favorite actress. I believe this film was so deeply loved by fans and critics partly because of its amazing cast, but mostly because of its authentic script that bravely attempted to explore the complexities of mother/daughter relationships. One of my favorite movies of 2017. This next movie was famous for its intimate scene with a woman and a sea creature. Can you guess the one we're talking about?

This movie won multiple Academy Awards, including Best Picture, and Golden Globe Awards and swept audiences off of their feet. Truly a unique storyline with just as unique characters, The Shape of Water is a love story unlike any other.

Don't see this just because Harry Styles is in, see it because it's an incredible film. Based on the untold true story of a shocking battle, it's an emotional war movie that will have you mesmerized by the authenticity of community heroism and emotional from the incredible performances. Was this next one all a dream? (You'll see what I mean in a second...)

This movie is the definition of "whaaaaaaat??" If you have seen it, you know what I'm talking about. After it ends, you might be questioning your own reality.

One reviewer described Whiplash as "cinematic adrenalin...it is a deeply personal and vibrantly alive drama." It's a rush of music, emotions, tension and authenticity. Viewers get to see a different, more serious side of Miles Teller that will create a whole new level of respect for the young actor. This next movie on our list was directed by one of the most artistic minds of our generation...

One of the most visually satisfying movies to be shown in theaters in a long time. The Grand Budapest Hotel isn't your regular box office smash, it's more of a big-budget indie film. It's a quirky story with vibrant characters and heartwarming humor, there are very few movies with this kind of quality.

10. Guardians of the Galaxy

Yes. So much yes. I loved everything about this movie. Get ready to laugh a lot and be amazed by the storyline and characters. Plus, the soundtrack is amazing. People have some incredibly strong opinions one way or the other about this next film...

2008 was a great year and I'd say the highlight might have been the release of this movie.  The Dark Knight took over theaters and absolutely smashed box office records. Heath Ledger left us with a truly remarkable film. Now, let's rewind to 1994...

This 1994 classic had to be in the top 25 best movies, no need to explain. If you haven't seen it, this should be on the top of your list before you watch some of the others. It deserves your time and respect.

Ansel Elgort driving insanely fast and falling in love, all while people are robbing banks and shooting guns? It's like all of my favorite things rolled into one movie. If you're looking for incredible, visually stunning, heartstring-yanking sci-fi this next one is the movie for you...

Alien invasion. Spaceships. Race against time. Love. Heartbreak. Yeah, it's that kind of movie. Plus, Amy Adams. One fan on Rotten Tomatoes raved that it was "simply a phenomenal, emotional rollercoaster of a movie that rightly deserves its spot as one of the finest movies of the past decade."

This movie might haunt you forever but in the best way possible. Everyone needs to see this movie. It's thought-provoking, scary, at times even funny, and overall an incredibly unique movie. Even Rotten Tomatoes loved this movie which is a big deal. Okay, back to our favorite franchise for this next epic film...

If you weren't a Star Wars fan before, this would have awakened the force in you for sure. Diverse cast members, a powerful story line and some familiar faces. The Force Awakens has new evil, new good and cooler light sabers.

Based in the city of stars, with two of everyone's favorite stars, La La Land is the classic musical movie that we didn't know we needed. The music is enough to love every part of this movie, but the storyline is truly beautiful and inspiring; some would even say heartbreaking. Emma Stone and Ryan Gosling show everyone a side to them that no one knew was there and stole the hearts of so many with their chemistry and talent. You're getting so close! Ready to see what number 1 on the list is?

And finally... number one! Charlize Theron is a literal bad ass in this film. With intense action scenes, crazy stunts, apocalyptic vibes and creepy characters, Mad Max: Fury Road has something for everyone. It's number one so don't question it, just go see it.

So how many of those have you seen?

Did your favorite make the list? Did you find some new movies that you can't wait to watch? Were you surprised that Leo was on there TWICE?

Inspire them to update their "To Watch" list or impress them with how many you've seen!
20%