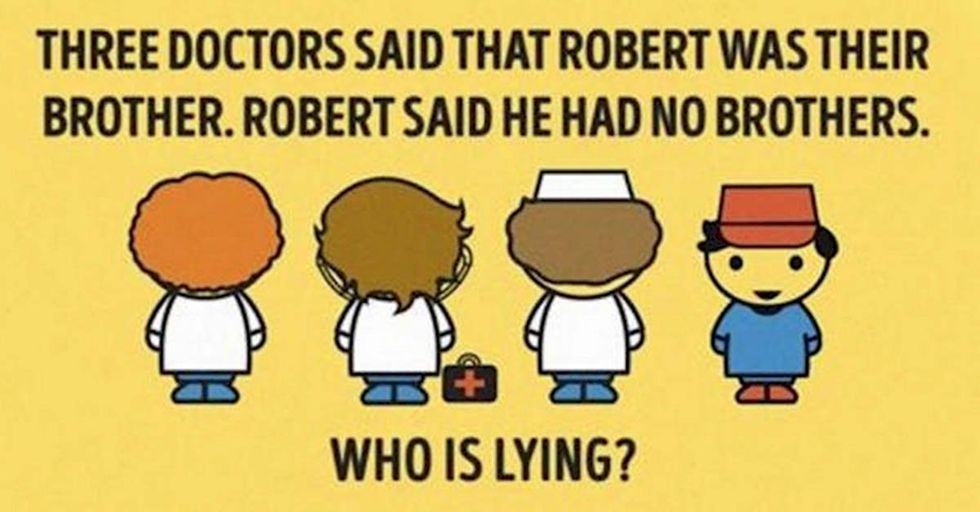 12 Quick Riddles That Will Put Your Intelligence to the Test

You probably (certainly?) won't get the answers to all 12 of these riddles, but take a crack at solving the quick head-scratchers.

They only take a second. You're bound to get a few of them, even if it's just because you've heard them before. How many can you solve?

Can you solve this one?

Since fish can't really "swim away" from their tank, the answer is still ten.

Well, you probably assumed that they were playing each other, which isn't' necessarily the case. This one was a little trickier.

Well, doctors don't have to be men, so the easiest explanation is that the three doctors in question were all Robert's sisters.

Can you solve the case?

You have to get pretty clever with this one. Those numbers correspond to the months June, April, September, October, and November, which spells out "Jason." Boom. You found your killer.

Good luck with this one!

via: Fun Things to Do When Bored

Well, which is it?

Don't be confused by the rhymes!

Don't let the rhyming scheme throw you off too much. It's a sponge.

I barely ever move... Does that count?

How is it possible?

Well, don't take this too literally. She's not really killing him, but just taking and developing a picture of him. She's a photographer.