How Many of These Elementary School Memories Have You Totally Forgotten? | 22 Words 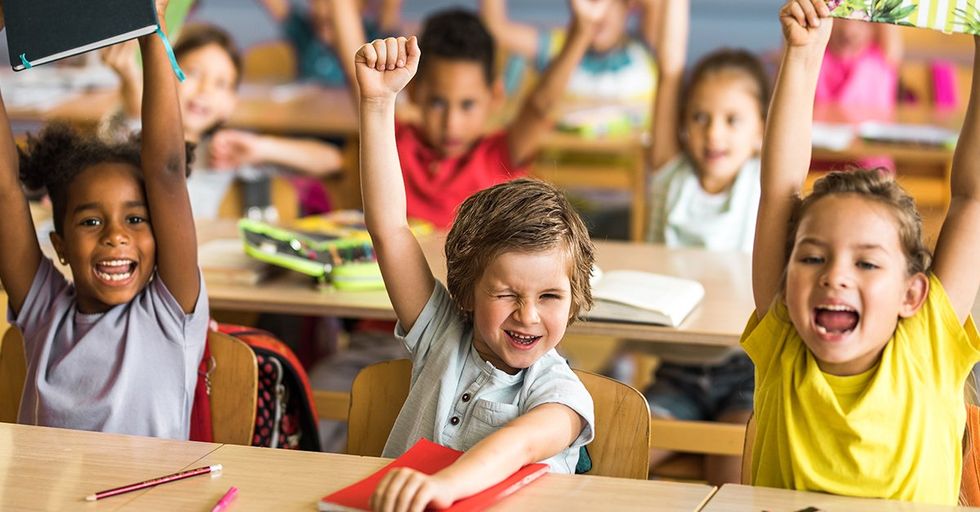 How Many of These Elementary School Memories Have You Totally Forgotten?

Ready to travel back in time? I don't have a fancy time machine or magical powers or anything like that, but I do have access to the Internet which sometimes feels like it's pretty much the same thing.

Today, we're traveling to the late '90s and early 2000s. If you were in elementary school around that time, then I've got news for you. I know exactly what your life was like.

OK, maybe not exactly, but I bet I can point out some specific things that you'll recognize. Things you might've forgotten about completely! But I didn't, and neither did the Internet. So, ready for that hit of nostalgia? Then let's take a trip back to our elementary school days and relive some of the most magical memories!

How many of the following things did you forget about until just now?

Every once in a while, my parents would tell me I was allowed to choose one book. And I took it very seriously.

2. Rejoicing during the actual Book Fair

There was nothing more magical than walking into the cafeteria or gym and seeing those bookshelves set up. Was there a new Captain Underpants? (There always was.)

3. Racing to finish these multiplication tests:

Out of all the stressful minutes I experienced in elementary school, none were more stressful than the 60 seconds I had to complete one of these things. And we did them every day!

4. Learning to "play" the recorder.

And, consequently, driving your entire family completely nuts as you launched into your twelve-millionth rendition of "Hot Cross Buns."

5. Playing with these pattern blocks:

I assume they were probably meant to teach something, but all I remember was using them to make fun designs. Is that learning?

Bonus points if you also had one of those notebooks with black paper specifically for gel pens. Obviously, the milky ones were great, but don't forget about the Gelly Roll Lightnings! Those were my jam.

7. Stepping on these weird sinks to make them work:

Whoever designed these sinks clearly didn't take into consideration that most kids are significantly lighter than adults. You really had to stomp on that thing!

And making sure to get enough valentines for everyone in the class. And obsessing over which valentine design you were going to give your crush.

9. Crying over this book:

Poor Old Dan! Poor Little Ann! I have to assume that Wilson Rawls was horribly wronged by a 4th grader at some point in his life and made it his life's mission to make as many 4th graders cry for the rest of time.

10. Banging your ankle on one of these step stools:

I'm kind of confused about why these stools exist at all. They're not even that tall, they're a pain to maneuver around the stacks, and they're always looking for an unsuspecting ankle to attack. Maybe they were also created by Wilson Rawls.

11. Being excited about Parachute Day

I remember racing to finish my computer assignments so that I could get some math blasting in. I may have been learning– but it was fun –dang it!

I think that every teacher must just receive a giant bag of these bingo chips whenever they graduate from college. There's no other explanation for why they all have them.

14. And playing with these rubber band things:

Geoboards! Another thing that I assume was meant to teach me something, but I have no idea what. Perimeter and area, maybe?

Or, in my case: Wishing that you had a Tech Deck.

Look, potatoes are amazing in all their many forms. Fries. Hashbrowns. Chips. But smiley potatoes are the best potatoes. I'm willing to fight anyone who disagrees with me.

17. Eating your lunch off of one of these plastic trays:

If you stare at this picture long enough, you'll start to smell that rectangular pizza. You might also start to hear people offering to trade their Goldfish crackers for a bite of it.

The wrapping paper page was always my favorite part of the fundraisers. There were so many fun designs!

19. Struggling to open your milk carton.

Looks like Wilson Rawls also had a hand in developing these milk cartons. That guy sure kept himself busy, huh?

20. Crushing your finger underneath these scooter wheels:

Scooter day was another super fun day in gym class. Until you were injured, of course.

Kids in my class would take teeny tiny pieces of the stuff from behind the posters on the wall in order to amass their own blob. I get it– I once asked for the poster putty for my birthday. I didn't even have any posters!

22. Struggling to choose the correct WordArt for your project.

Which design will perfectly capture the themes I'm going to explore in my Holes book report? Obviously, I can't start writing the report until I've made a decision.

In my mind, these were the tastiest chocolate bars in the world. Am I just misremembering because they only came around once a year?

24. Spelling "BOOBIES" with your calculator.

Don't pretend you didn't do this. We all did this.

25. Beaming with pride when you were picked as the line leader.

It was a very big responsibility! The class would never get to art class without you in the lead.

26. Losing one of these pencil cartridges:

Pencils with cartridges : nostalgia from nostalgia

Thereby making the entire utensil entirely useless. I don't know who invented these pencils but I have exactly one guess and it rhymes with Bilson Bawls.

27. Shamefully flipping your card when you misbehaved.

Flip your card- The scariest part of my elementary school days : nostalgia from nostalgia

(Or moving your clothespin or whatever.) There was nothing worse.

Heads up: These are still a thing! Clip your box tops and donate them to a local elementary school for old times' sake.

Why? Because it was cool. You needed no other reason.

You haven't lived until you've played with Kid Pix. I can still hear all the different sounds it made. Share this with someone you went to elementary school with!