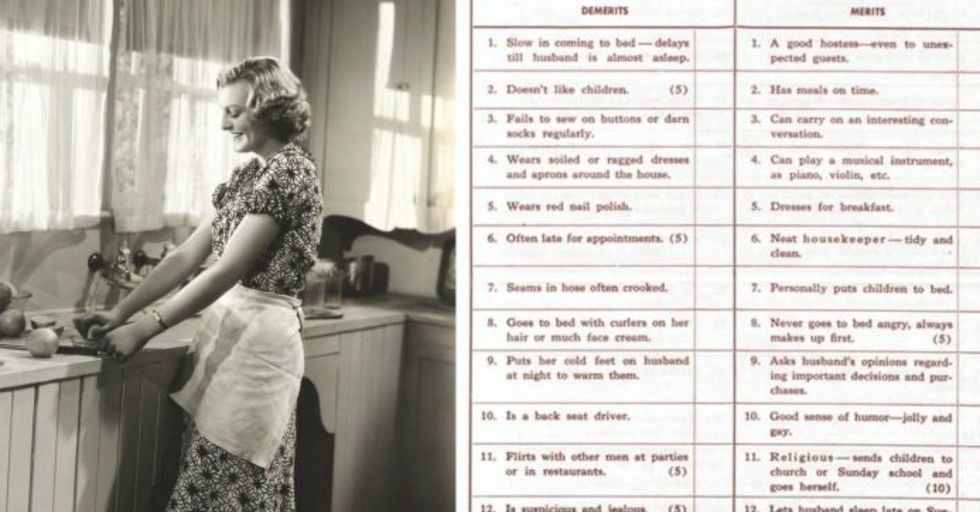 How Would Your Marriage Score On This Test from the 1930s?

There's no secret formula as to what makes a good marriage, but that doesn't stop psychologists and scientists from trying to figure it out. I'm sure their spouses are thrilled.

For example, back in 1939 Northwestern University's George W. Crane, Ph.D and M.D. (dude who no doubt had a perfect marriage) made something called the Marital Rating Scale to see how a marriage rates.

With one checklist for each spouse, Dr. Crane lays out the defining characteristics of good marriage partners. As you'll see, there's a vast difference between the merits and demerits for husband or wife, so much so that you might actually be glad we live in 2016 for the first time in this craptastic year. At least we've made some advances...

So to summarize, a good husband is one who does such things as "reads newspaper, books, or magazines, aloud to wife" — since, ya know, she probably can't read 'cause she's a woman. On the other hand, men get points deducted for such bodily functions as snoring and blowing their nose at the table. Step away and get a hanky.

If you want to make a good Stepford Wife in the '30s, you'd better not wear red nail polish or come to the breakfast you made not completely dressed for the occasion — and I'm assuming that doesn't mean yoga pants and a clean T-shirt. And it should be noted that while the wife gets points for going to church, the husband gets to sleep in on Sunday. Sure, seems legit. How did you rate?