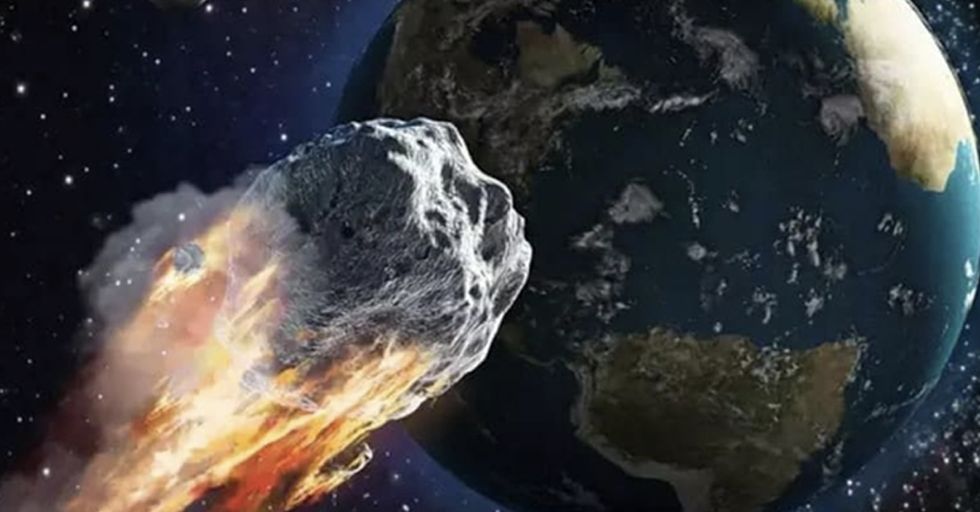 This Is How You'll Die If an Asteroid Hits Earth

If you're as riddled with anxiety as I am, you've spent plenty of time thinking about how the world will end. There are enormous underground volcanoes that could erupt and block out the sun. There are super-plagues that could spread across an entire population in hours and asteroids that could hit Earth. There are all the causes of global warming that could just... keep on doing what they're doing.

And those asteroids? They can just thwack the earth at any moment, and then it's goodbye all life on the planet.

For the anxious, that's a horror story. But for the curious? That's a choose-your-own-adventure. Because while we intuitively know we would die, we don't know for sure how we'd die.

But the folks over at Vox dug up a study that explains what exactly would happen to our puny human bodies if our planet was struck by a space-rock the size of Texas. Let's find out what would go down.

Knowing that something is unlikely isn't the same as knowing it can not happen. That's why the worriers among us are much more afraid of asteroids than we are of, say, Jason Voorhees. Asteroids are real, unlike hockey mask-clad killing machines.

What if an asteroid just hits the Earth all of a sudden?

My therapist has, time and time again, labeled this an intrusive thought, but when I'm driving down the freeway, I can't help but think about how I'd feel if I looked into the sky and saw an asteroid hurdling towards me.

There was even a phase where asteroid movies were all the rage.

Hollywood knew this specific scenario would frighten us to our core! Honestly, I think the film industry for making at least Armageddon, which depicted the people of earth conquering the asteroid and continuing to exist so Ben Affleck and Liv Tyler had a planet on which to get married.

So, in the interest of quelling our collective anxiety...

We've been talking about the sudden eradication of all life on the planet for a minute now, so sorry if your heart rate's spiking a bit.

... Vox found out what would happen if an asteroid did hit the earth.

So much of fear is uncertainty, so we really do owe Vox a debt of gratitude for digging in and finding this 2017 analysis from Geophysical Research Letters that spells out what would happen to our poor human bodies in an asteroid strike.

First, assume you're not standing directly under the asteroid.

Because then you'd die by crushing. That one's obvious.

How would you die?

If you're walking past a moving crew lifting a piano into an apartment when the rope snaps and the piano falls, you'll survive if you avoid being hit. But somehow, an asteroid hitting the ground is thought to bring about mass extinction. So what's the difference?

They explained this in Armageddon.

They say if the asteroid hits the water, it'll "flash-boil millions of gallons of water," "create a tidal wave three miles high," and "half the world's population will be incinerated by the heat blast and the other half will freeze to death from nuclear winter."

But that movie was full of inaccuracies.

I'm sorry, I know he's very attractive, but I do not buy Liv Tyler falling for Ben Affleck. She seems like she'd be into, I don't know, smarter guys. Professor types.

Would we all be incinerated?

The Armageddon guy brought up the concept of a heat blast, and that sounds pretty scary. Maybe we'll all be washed away in a wave of fire? That is the number one worst way to go.

Would a tsunami wash us away?

Wait, no, if the asteroid hit the water and caused a massive tsunami, you'd first take the full force of the wave, which would be like getting hit by a 3,000-foot high car. And even if you survive, you drown. That would be the worst way to go.

Would a dust cloud block out the sun?

Now I take it all back — what id the sun blocked out by a dust cloud rising from the impact zone? At least the fire and tsunami are quick — slowly starving to death over the course of years as the world gets colder and runs out of food would be, without question, the worst way to go.

(That one feels least likely.)

Somehow, I don't buy the idea that we'd all just shrug our shoulders and let the world die. Human ingenuity would kick in, and we'd innovate our way out. Although, a massive dirt cloud isn't that much more obvious than all the signs of global warming, so maybe Congress would deny crop death and overwhelming coldness?

Would the planet just explode?

I sure hope so! After thinking about burning, drowning, and freezing, a simple explosion sounds pretty relaxing.

Here are the numbers:

Running over 50,000 simulations with different sized asteroids and areas of impact, Obviously a bigger asteroid would mean more casualties, but there were some surprises in Vox's graph. First of all, thermal and tsunami were only the second and third place finishers in terms of total deaths. A 400m asteroid would cause roughly 25,000 tsunami deaths and roughly 75,000 thermal deaths.

And ejecta? Oh yeah, you'd better be worried about ejecta.

I didn't even think about ejecta! While it would only cause a sliver of the total casualties in an asteroid strike, we also have to worry about geological matter hurling through the air after the strike. So that's another thing to stress about.

But the most likely cause of asteroid death hasn't been used in any movie scripts.

Somehow, Hollywood got it wrong, and nuclear winter and heat blasts would not do the most damage. See, this is what happens when you let Billy Bob Thorton improvise on-set.

That's right, wind would be the number one cause of human destruction after an asteroid strike. According to Geophysical Research Letters, wind deaths would account for 60 percent of human casualties.

The shockwave from impact would incredibly powerful.

The wind gusts created by the impact would be so great they would flatten cities. It's like when my sister was building a house of cards on the kitchen floor and I kicked right next to it — I didn't get in trouble because the wind did it.

And wind can kill plenty of people whether the asteroid makes contact or not.

Even if the asteroid breaks apart in the air, the wind gusts it creates would still be powerful enough to wreck us up.

(Which makes the ending of The Dark Knight Rises even more ridiculous.)

You're telling me a nuclear bomb goes off over Gotham Harbor and everyone is just okay? What, was Bane trying to destroy the city with a nuclear firecracker?

The pressure from that wind could pop your internal organs.

Oh cool, another horrible way to die that I hadn't thought about — what if the pressure from an asteroid strike was so intense my internal organs just went ka-put inside my body?

But let's get into the anxiety-quelling part — being killed by an asteroid is extremely unlikely.

Thankfully, there isn't a lot to worry about, asteroid-wise. Vox spoke to Eric Christensen, who "hunts asteroids for NASA at the Catalina Sky Survey," and he said, “You have to think about the risk in terms of it’s not a risk to a person or a city, but a risk to humanity." That means that you and me? We're off scot-free, baby! It's just our dumb kids and grandkids who are gonna have to stress about this! Yes!

Especially good news: there are no expected deaths from monsters hiding within the asteroids.

NASA has been tracking asteroids for years, and there is no evidence yet of an extremely phallic-looking creature hiding in any of their cavernous folds.

It does happen occasionally that non-planet-destroying asteroids enter our atmosphere, like the asteroid that popped over Chelyabinsk, Russia, and injured about 1,500 people in 2013.

But earth is not densely populated.

Ultimately, Chelyabinsk was an outlier. Most of the earth is desert or water, so the odds that a rogue asteroid baby would hit you are incredibly low.

Plus, NASA is keeping track of these asteroids.

We have the big-brained folks over at NASA keeping watch over us, and they know when there's an asteroid to keep an eye on.

And they're constantly figuring out how they'd knock an asteroid out of the way.

As a video game player, my big idea has always been to put out an incredibly large piece of plywood to play Pong against the cosmos.

That said, NASA did recently miss a pretty big asteroid.

An asteroid 140-meters wide did just whiz past the earth recently, and NASA had no idea it was on its way. So hey, some asteroids are sneaky. We'll just have to upgrade our radar. No big.

And Bruce Willis and the boys are always available.

Worst case scenario, we send Bruce Willis and Ben Affleck up to drill into the asteroid and blow it up from the inside. And then we all listen to Aerosmith's "Don't Wanna Miss a Thing" and go about our days.