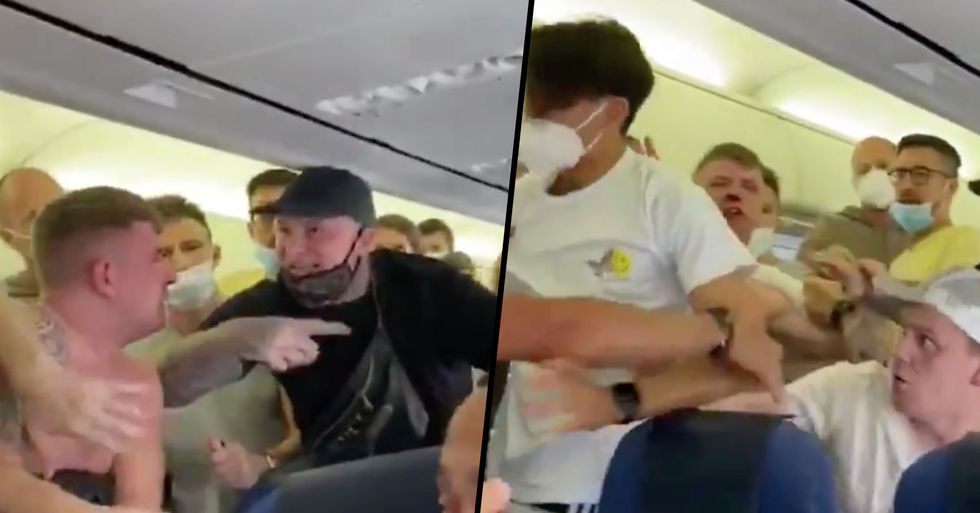 For most people wearing masks while out in public has become the new norm, and with things starting to get back to how they were pre-COVID, the need for extra precautions has heightened.

But not everyone is convinced masks should be a necessity and it has resulted in a pretty terrifying mid-air fight.

Every one of us has had to deal with the challenges 2020 has thrown at us.

And just now, things seem as though they're slowly returning to normal.

Places are reopening, restrictions are being lifted...

Despite the positive changes, there are still some precautions we all have to take.

To prevent us from plummeting back into the worst of it.

@Grendull @Sir_Grg @Casey I’m all for a gradual reopening with the correct precautions in place, such as mandatory… https://t.co/w9tpgTX8XP
— Cadenza (@Cadenza)1588900184.0

Although some people are choosing to wear a face-covering regardless.

Resulting in some people refusing to wear them, or all together mocking the importance of wearing a mask.

Countless anti-lockdown protests have taken place, with people wanting to "live freely than be oppressed by masks."

You'd think the pros would outweigh the cons, right?

Despite the experts' advice to stay covered in public areas, there are still people refusing to listen.

And when you're stuck on a plane with hundreds of passengers, that's a pretty selfish thing to do.

One such incident has resulted in a fight mid-air.

A handful of plane passengers found themselves caught up in a fight during a flight to Ibiza.

Which started when 2 men refused to wear face masks.

The altercation broke out once the plane had taken off.

On it's way to Amsterdam on Friday, July 31.

The footage shows a man in a black t-shirt wearing a face mask around his chin.

Ironically, he can be seen shouting at a shirtless passenger for not wearing a mask.

A third man, also without a mask, could be seen hitting the shirtless man.

And that's when other passengers interveined.

They claimed the "unruly," English passenger had been drinking vodka on the flight.

KLM has made face masks mandatory when boarding and during the flight.

But despite this, multiple passengers can be seen without masks.

And even wearing their masks incorrectly, rendering them pointless.

"Until at least 31 August 2020, you’re required to wear a face mask from the first boarding call until you have gone through the arrival gate at your destination to prevent the further spread of the virus. Without face covering, we cannot allow you to board. Passengers up to 10 years old and passengers who can’t wear face masks because of medical reasons are exempted from this requirement."

Although it doesn't appear to be effective.

Passengers are also required to wear masks at Amsterdam’s Schiphol airport, which means the men involved would have had masks, but refused to wear them.

Other passengers could be heard telling the two men to calm down.

With one shouting: "There are kids here!"

Footage later showed one man being restrained in the aisle while a flight attendant asked people to take their seats.

The men involved were restrained with the help of other passengers and later charged.

"Two unruly passengers refused to wear their face masks, and they were bothering their fellow passengers physically and verbally. The pilot informed the local authorities and upon arrival, both passengers were arrested. The flight safety was not compromised during the flight."

Despite what some believe, face masks are vital in helping prevent the spread of coronavirus.

Keep scrolling to see why people are justly outraged with one couple wearing disgustingly inappropriate masks...