The Umbrella Movement was the largest social movement in Hong Kong's history. | 22 Words 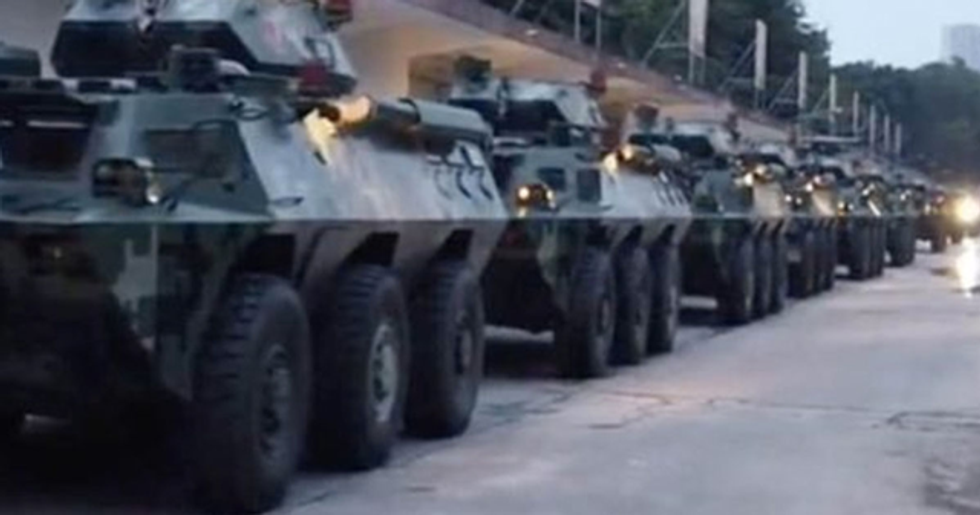 And the last 10 weeks, in particular, have seen increasingly violent clashes between protestors and police - airports were forced to suspend hundreds of flights as a result of these protests.

As protestors in Hong Kong remain unwavering and defiant in their beliefs, tensions are beginning to run high across the rest of mid-land China - so high, in fact, that the Chinese military seems to be preparing for the very worst.

And now, terrifying footage has emerged of a huge military vehicle build-up along the border of Hong Kong. Flights remain well and truly grounded, and the overwhelming military presence is making many feel uneasy about what may happen next.

Keep scrolling to see the footage, which only highlights China's growing tensions with the protestors in Hong Kong.

And the Chinese military are seemingly making their preparations.

Numbers of reports have been flooding in regarding the Chinese military's preparations to intervene with the unrest in Hong Kong. The Chinese government has previously warned Hong Kong about their movements, and said on Monday that the protests across the city had begun to show “sprouts of terrorism." However, China defines terrorism quite loosely, as it has previously used the term to describe non-violent opposition movements.

Large numbers of Chinese paramilitary forces are seen in the frightening footage assembling just eighteen miles from Hong Kong in the city of Shenzhen.

People have been describing the military presence as "overwhelming."

Overwhelming the number of military cars entering the city of #Shenzhen next to the boarder with #HongKong.… https://t.co/s2R3IPlP8j
— Alexandre Krauss (@Alexandre Krauss)1565629179.0

And many believe, with China flaunting it's military muscle in this manner, that something catastrophic might well happen.

The military seems to be preparing for something big.

The Chinese military, believing in the intel and these videos, have set in place a comprehensive military operation… https://t.co/eUq0nHwYVf
— Alexandre Krauss (@Alexandre Krauss)1565626632.0

Chinese state media have described the build-up of armed police units, shown in videos gathering at an arena called the Shenzhen Bay Sports Centre, as preparations for “apparent large-scale exercises."

The messages from Beijing to protesters in Hong Kong are becoming increasingly ominous. Chinese authorities, who recently denounced protests as “terrorist acts," have promised an “iron fist" response to the protestors. In this current climate, we can only hope that the issues growing within the conflicted country can only be resolved peacefully with no further violence or brutality.