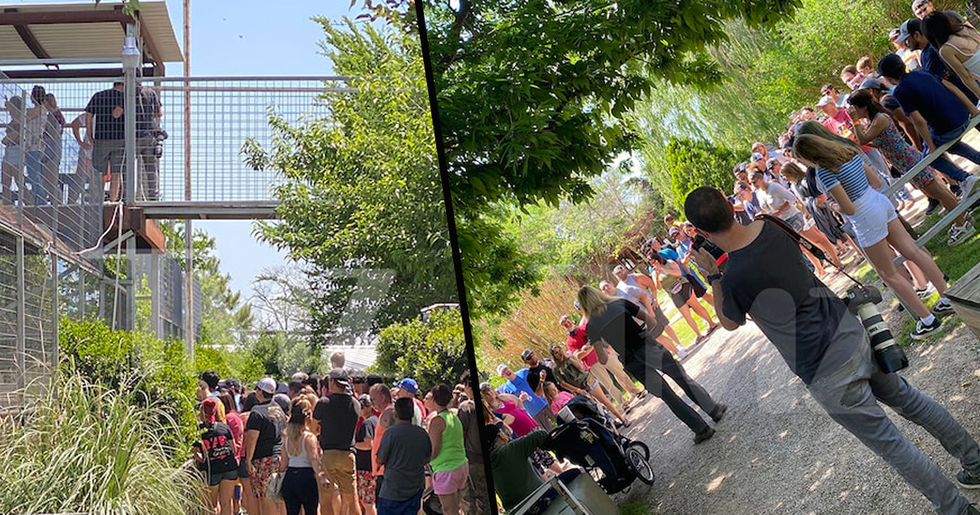 Thousands can be seen crowding around the tiger enclosures after Joe Exotic's zoo reopened to the public, for the first time since the series dropped on Netflix.

And people were clearly excited, as the zoo was completely packed out. It's a shame Joe Exotic didn't get to see it for his own two eyes, he would have been thriving off all the attention.

Keep scrolling for the insane pictures...

Joe Exotic's famous zoo has just reopened to the public...

And it's instantly made everyone forget that we're still in the middle of a pandemic. The pictures are shocking...

Fans are still talking about it. And now that the zoo has reopened, people didn't hesitate to be the first ones to get a glimpse of the famous zoo.

Thousands of people caused mass crowds to gather around the tiger enclosures...

Pictures showed his zoo packed out to the max, as people from all over flocked to his beloved zoo for the first time since Tiger King dropped.

He would have loved to see just how much publicity it caused.

The zoo is now called Tiger King Park, and it seems to be cashing in on Joe's Netflix notoriety pretty well.

The queues to get into the Wynnewood zoo were ridiculously long after it reopened under new CDC social distancing and sanitation protocols.

The zoo has lost a lot of money since the virus restrictions went out, but that all seemed to change now they've reopened to the public.

I wouldn't be surprised if they made it all back in one weekend.

There were at least 200 new visitors!

Once entering the zoo, it seemed as though social distancing measures went out of the window.

People could be seen without masks, cramming together to see the big attractions... lions and tigers.

People could be seen sat shoulder-to-shoulder, waiting for a chance to play with the cubs.

While Joe is the reason behind the new burst in business, it's his business partner Jeff Lowe that will be raking in the money. Jeff and his wife, Lauren could be seen greeting people as they walked around. Sorry Carole, but it looks like people are still hyped up to visit Joe's zoo. Keep scrolling to check out how these YouTubers tricked Carole Baskin into an exclusive interview...