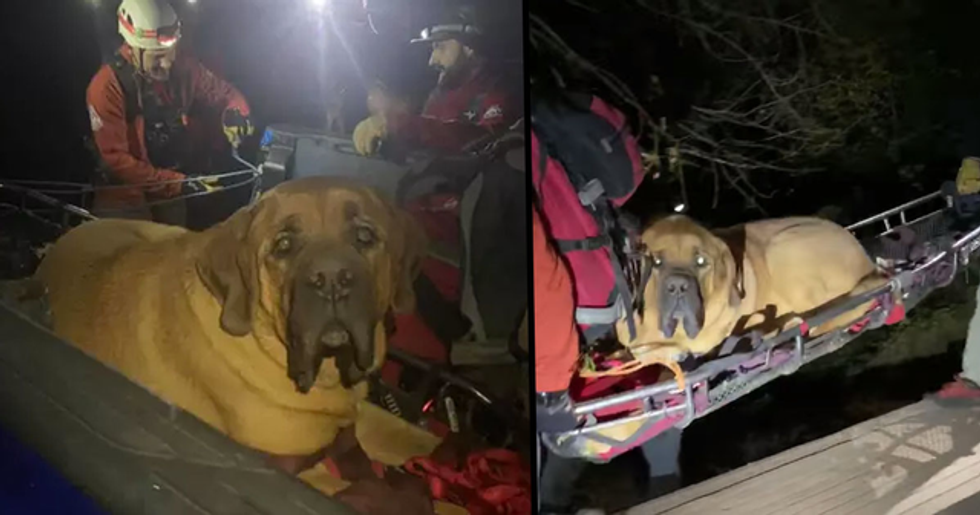 A hike always sounds like such a good idea in theory - but in practice, they can sometimes be quite the opposite. Particularly if you're prone to overestimate your fitness levels. And this week, one huge dog learned this lesson the hard way.

After hiking up up the Grandeur Peak trail near Salt Lake City, an enormous bull mastiff named Floyd decided enough was enough. The slightly curvy canine weighed in at a massive one hundred and ninety pounds - and once he'd reached the summit, he was understandably exhausted. Unluckily for the owner, though, Floyd sat down and refused to move - and mountain rescue had to be called to save him. For the hilarious pictures of Floyd on a stretchers, scroll on.

Hiking has really had a resurgence in recent years.

Once the reserve of certain outdoor fanatics, now it seems nearly everyone is partial to a ramble around the great outdoors.

And who can blame us?

The opportunity to get outdoors, move your body around, and see the beauty mother nature has to offer seems an offer too good to turn down.

Hiking is also a great way to spend quality time with loved ones.

In a world so constantly entrenched in our online relationships, taking some time to interact offscreen is invaluable.

And we're not just talking about humans.

Hiking is also a perfect pastime to share with your doggy pals.

But, as this story proves, its a move to treat with caution.

And if your dog isn't in the rudest of health, or the peak of fitness then you may be best avoiding the really hard hikes - in case the same thing happens to you.

There are some dogs that are just not built for hiking.

Take a bull mastiff, for instance. These giant hounds weigh around one-hundred-and-thirty pounds on average. Not an ideal exercise partner, some may say.

But one owner was undeterred.

A giant bull mastiff named Floyd (plus his owner) attempted to hike up the Grandeur Peak trail near Salt Lake City this weekend.

And, to be fair, they made it.

Taking in the beautiful views, we bet Floyd and Mr. Floyd felt pretty pleased with themselves. But then things started to take a downturn.

Because Floyd wasn't the fittest of dogs.

And after climbing the large mountain, the almost two-hundred-pound pet was left feeling pretty exhausted. Hey - we can relate!

And his response was pretty relatable, too.

When Floyd's owner tried to begin their descent, he was having absolutely none of it - and refused to move. And you can hardly carry a two-hundred-pound pet, can you?

Not knowing what to do next, he decided he needed to bring in some outside help - and called in the professionals.

Things were actually getting quite dangerous.

When night falls in Utah, particularly at this time of year, the temperature drops dramatically - and could become quite dangerous.

Luckily, the team were on hand to help.

And they shared their adventure on Facebook. "Several hikers had called Unified Police to report that the dog and his owner were on the trail and not able to move."

They also shared some truly excellent images of the rescue.

"Salt Lake County Search and Rescue members went into action and headed up the trail to make sure Floyd could get off the mountain with his human before it got too cold."

But what makes it all the more hilarious?

Quite how much Floyd seemed to enjoy his luxury treatment. "Floyd was packaged in a litter and carried down the mountain. Floyd was a good boy and was happy to be assisted."

There's something about the expression of Floyd's face as he's carried that's just undeniably adorable (and hilarious).

Many are impressed with the team.

The fact the dedicated their time to rescuing this over-exerted dog speaks volumes to their dedication.

Many are deeply touched.

The huge efforts of the search and rescue team - even in the slightly ridiculous circumstances - is something that should be commended.

The slightly princess-esque expression on Floyd's face is what makes it. You have to wonder whether he planned the whole thing.

And we hope this story teaches some a valuable lesson.

If you have a dog with a propensity for refusing to walk - make sure it's a least on you can carry! Want to see another dog who's not having a great day? Keep scrolling for the malamute spotted in the back of a pick-up truck, covered in a blanket of snow. Brrr!