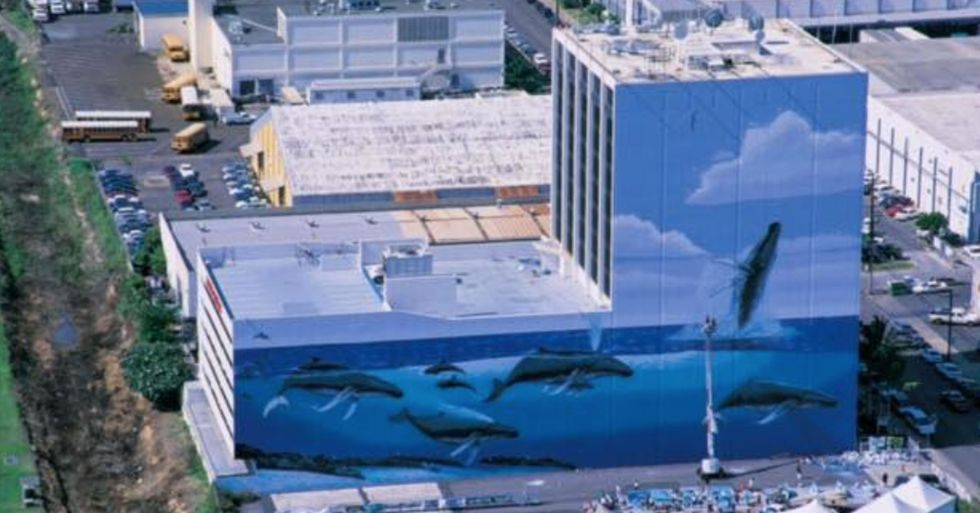 Art is something to be shown off, not covered up.

So people were appalled to see that a beautiful mural had been covered up with adverts for 20 years.

It's now been uncovered again, and the artist has had some very interesting things to say about it...

An amazing mural has been uncovered in Dallas.

Over 20 years after it was first painted.

Wyland, the artist who painted the mural, is now a 63-year-old artist and conservationist.

Who goes by his last name.

...On the back of a downtown building.

It covers the entire southwestern facade of a building, with its six life-size humpback whales swimming near a coral reef.

In total, the creation is 164 feet long and eight stories high.

A small part of mural even wraps around the corner, onto the side of the building.

As if there wasn't enough space already.

The mural was funded through Wyland's foundation, as a present to the people of Dallas.

It was not paid for by anyone.

Though, J.C. Penney, a Plano-based company, helped out by donating painting and lodgings.

The whole mural was created by Wyland devoting his time and money to it.

Once finished by Wyland and his team it was called Whaling Wall 82.

But that was just a drop in the ocean.

As the mural is just one of 101 Whaling Walls he has created all over the world.

Wyland has said that he 'remembers the unveiling well'.

Dallas News reported that he said “We had so many people. It was just tremendous. There was nothing like it. It was the biggest piece of public art in the city."

Unfortunately, however great the mural was, it was eventually covered up.

Instead, outdoor advertising replaced its beauty, until this month.

With the currently pandemic Clear Channel Outdoor, the company that organise the adverts for the location, has been slowing.

And it seems that slowing has resulted in the magical mural finally being on display again.

Dallas News asked the company spokesman Jason D. King about the mural and he responded saying:

"Clear Channel Outdoor manages advertising sales for the wallscape and creative is posted and removed as one campaign ends and another is set to begin."

They also spoke to an ex Dallas City Council worker, who was able to shed a little light on it.

Veletta Lill began working for the council 2 years before the mural was painted and left in 2005.

She said that “prior to the time that large-scale advertising was permitted" the only large-scale murals being painted downtown, she says, “were of an artistic nature."

But then along came the large scale advertising.

Resulting in the Whaling Wall 82 being covered.

Speaking of the sentiment of the whales, Lill said, “I feel that you need noncommercial pieces in your downtown. So much of what we have that’s of super-scale downtown is advertising.

"It’s commercial. This is beyond commercial. It speaks to our humanity. And I feel strongly that it’s important to have that downtown as well."

Art and murals being covered by commercial adverting aren't unusual either.

Although they don't remove the art, Wyland explained that: "Instead of destroying the wall — because they know they’d be liable if they did that — they cover it up."

Wyland, who now lives in Florida Keys was so excited by the reappearance that he wanted to go and visit it.

Saying that he wanted "to touch it up, to put a protective clear coat on it. It doesn’t belong to me or the owner of the building, it belongs to the community. It was a beautiful gift. I had a real smile on my face when I heard about it this morning from my foundation director. This is such positive news."

He also added "how is it OK to cover up a landmark mural that was dedicated by Herschel Walker and me to the people of Dallas? Why would anybody think that’s OK?"

"My hope is that the people of Dallas will help me protect this mural and others like it around the country." For more amazing street art, scroll on...