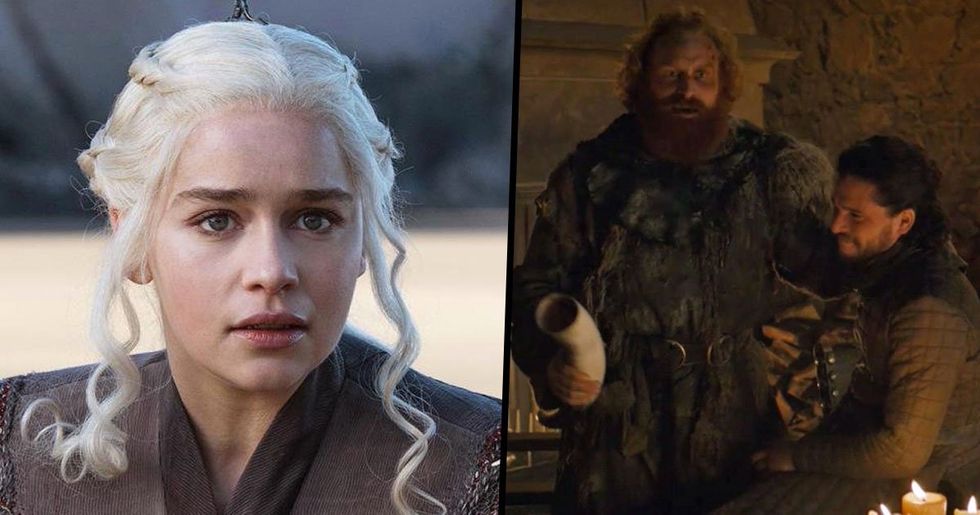 As Game of Thrones draws to the end of its eighth and final season, every episode is packed with tension. We have less than three hours of television magic left before we discover who will end up sitting on the Iron Throne - and, more importantly, who will still be around to see it.

But in spite of the meticulous attention to detail we've noticed in the final season's episodes, it's clear the show is not immune to some problems, either. Last week's and this week's episodes have been criticized for unrealistic and dissatisfying plot lines regarding several of the main characters.

None of these compare, however, to a mistake spotted in the most recent showing, The Last of the Starks. Because this isn't an error that could be explained away as intentional. It's a plain old goof, the sort of which we wouldn't expect from this sort of television show. And once you notice it, you won't be able to unsee it.

Game of Thrones is past the midway point of its final season.

There are only a couple of hours of the show left - and fans are getting anxious to see how everything comes together!

This season has been eagerly anticipated.

It brings together the varying stories from the past eight seasons and ten years - finally giving viewers the answers they crave.

The fate of Westeros is about to be decided.

And viewers are waiting with bated breath to see story lines that began nearly a decade ago in season one reach their conclusion.

There's still much to be decided.

And it seems we'll be waiting right up until the end to find out what exactly the future of Westeros looks like.

Which means there are still some epic battles to come.

If there's one thing people can agree on, it's that Game of Thrones absolutely kills it with the battle sequences.

Even after one the most incredible battles in television history.

The third episode of the eighth series, "The Long Night," was an epic feature length sequence in which all our favorite characters battled with death itself.

The leader of the opposition was the terrifying Night King.

Although we still aren't entirely sure of his backstory, we can all agree that he was supremely frightening.

Even scarier? His army.

The Night King led a horrific (and enormous) gang of rotting, dead creatures called Wights, who he could raise from the dead again and again.

But the Night King didn't count on one thing.

Arya Stark, the youngest Stark daughter, has spent the majority of her Game of Thrones journey training to be an exceedingly skilled assassin.

Her whole story had built to this moment.

With a little bit of careful knife trickery, Arya succeeded where many before her have failed, ending the Night King's reign of terror once and for all.

The threat of the evil beyond the wall has been dealt with.

But we're still left with one very big question. Who will end up seated on the Iron Throne?

While Daenerys believes the Throne is hers by right, many are starting to think she's an unfit ruler. Plus, there's the small matter of Jon Snow's (more valid) claim.

With the show's last true villain, Cersei Lannister, currently sitting on the Iron Throne, it looks like there will be much strife ahead for the armies of Westeros.

Cersei appears to have no intention of giving up.

She's lost pretty much everything to get to her place of power, and it seems she has almost nothing left to lose.

This series of Game of Thrones has not been seen as flawless.

Many viewers and critics took particular issue with the Battle of Winterfell, claiming it relied too heavily on "plot armour," allowing essentially all the main characters to survive.

But on top of this, fans noticed something else last night.

Something that wasn't just an ideological problem for the story line - but something that could only be described as a genuine (and huge) mistake.

In fact, it even made some fans double take.

It was a goof of such monumental proportions that many are frankly shocked that it managed to slip under the radar of HBO.

To many, it may look fairly standard as the series goes. But those with an eagle eye may notice something distinctly out of place.

The Starbucks cup on the table has irritated many.

In an episode with a variety of different goofs, it seems the Starbucks cup was among the worst. For many, it really has a negative impact on the emotional impact of the scene.

Though others found it a little bit funny.

Many fans of Kit Harrington, who plays Jon Snow, think he's the one to blame, thanks to his well documented Starbucks addiction.

Some believed the image was a hoax.

But dedicated Game of Thrones viewers went back over the scene in order to prove that Starbucks cup really did make an appearance.

Some took the opportunity to poke criticism at the show.

Far a select few Game of Thrones fans, this coffee cup clip up is emblematic of a wider problem in season eight - a sense of laziness.

Many Cersei Lannister fans have been irritated by the final season's neglect of the show's biggest villain - and now this coffee cup has made it seem all the worse!

Some made jokes on the topic.

Many claimed we had no proof that there aren't Starbucks locations in Westeros - it would make sense, given how commonplace they are in our world!

The joke potential was pretty substantial.

Many called back to fan favorite Jaqen H'ghar, who famously tried to strip Arya of her identity in order to teach her how to be a true assassin.

It refers to the Starbucks convention of writing your name on their cup - which they would struggle with if the order was for Daenerys.

She may well be a contender to the longest fictional name ever.

She has many titles, as seems to continue picking up more and more as her journey through the Seven Kingdoms continues.

Funny though it is, it's also a little worrying.

For many Game of Thrones fans, the outcome of season eight is hugely important, and if people aren't even paying attention to the little details, that doesn't bode too well.

Some are frustrated by this silly mistake.

And though it's really quite small in the grand scheme of things, it's worrying to see in a show which relies so heavily on the details.

And we can only imagine Daenerys's reaction.

As Daenerys is someone prone to bouts of fearsome temper, we bet whichever runner accidentally left the coffee cup in shot is feeling pretty glad she's just a fictional character.