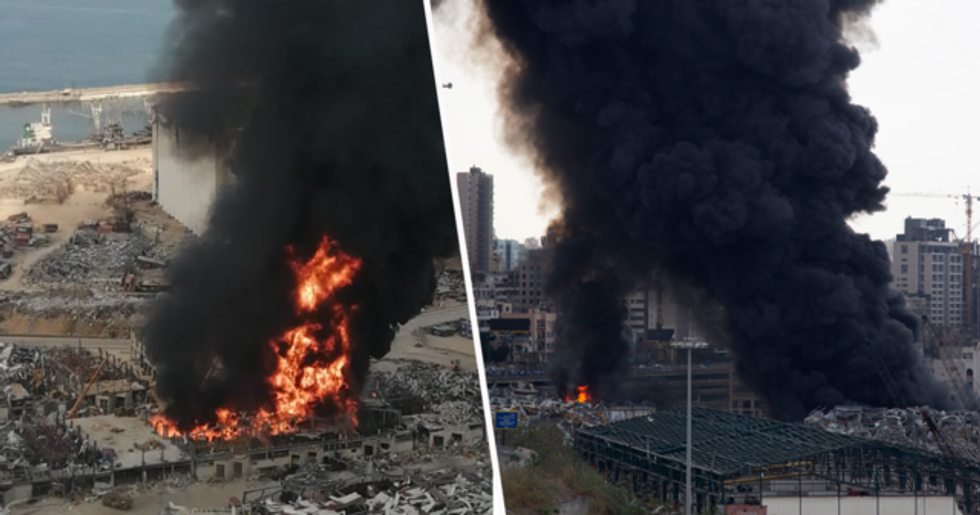 It has been reported that a fire has broken out at the Beirut port, just one month after a devastating explosion destroyed the city...

The people of Beirut just can't catch a break, can they?

Just 4 weeks after the shocking blast, the residents of the Lebanese capital are faced with yet another grave problem.

It all started on August 4th.

At around 6 pm local time, a sudden and devastating explosion ripped through Lebanon's capital city.

The footage from the blast was truly horrifying.

But it has since been confirmed that at least 190 people have died, with a further 6,500 people suffering from grave injuries.

Footage from the aftermath continued to emerge online...

In which people could be seen wandering around, dazed and disoriented, amongst the crumbling builds and smoking rubble.

It was utterly heartwrenching to see...

A once vibrant and bustling metropolis now lay in smoke and tatters.

It is going to take Beirut years to recover from this.

But now, as the rebuild slowly begins...

Beirut's residents have been faced with yet another devastating event.

It has been reported that, at the site of the explosion...

Yet another fire has broken out.

This video was posted onto Twitter, alongside the caption:

"Insane fire at the port, causing a panic all across #Beirut. We just can’t catch a break."

Valiant efforts are being made to put the fire out.

It has been reported that the Lebanese army have been drafted in to help fight the fire alongside the emergency services, and helicopters have been seen over the city carrying large buckets of water to attempt to douse the blaze.

Local media has reported that people in the surrounding area have started to be evacuated...

But, of course, panic is rife, and some residents have been seen getting into their cars with the intention of leaving the city.

As of yet, the direct cause of the fire is unknown.

But a source from the Lebanese military told Metro that the fire started in a warehouse being used to store oil and tyres.

Our thoughts go out to the people of Beirut.