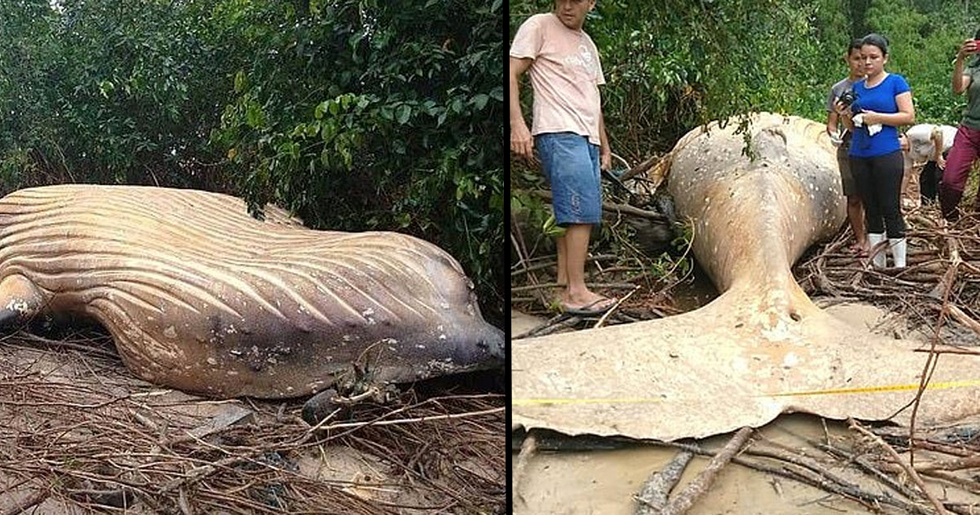 Biologists are baffled after finding a dead humpback whale in the depths of the Amazon jungle. The whale has been identified as a 12 month old calf, measuring at an epic 36 ft. long.

Normally humpback whales can be expected to be seen in the Amazon Basin during the winter where they come to mate and to give birth before heading to the Antarctica for feeding season.

The whale was discovered after a large amount of birds were found feeding on its carcass, but mystery still surrounds exactly how it got there.

Just in case you are unfamiliar with this mammal, this is a humpback whale.

It is hard to imagine getting up close and personal with one of these majestic creatures isn't it?

The humpback whale is one species of the baleen whales which all have plates in their upper jaws instead of teeth.

Other baleen whales include the blue whale, the gray whale and the pygmy right whale which is the smallest of the baleens, weighing in at a tiny (lol) 5 tons.

A humpback will normally grow between 40-60ft. long.

Although the largest one ever recorded was a colossal 89 ft. long! These whales can weigh up to a hefty 44 tons.

This is because they do not have any teeth and have to swallow their prey whole meaning only small fish are on the menu.

These whales normally feed in cold waters during the summer months.

During this feeding season, you are likely to find these whales in locations like Alaska and Antarctica.

And then when winter approaches, they seek out warmer waters to mate.

As well as to give birth to their young.

The sounds made by a humpback whale are eerily haunting.

Although both the male and female produce whale sounds, only the males can produce what we know as a whale song. These melodic moans can be heard from many miles away at a very deep frequency.

Whales are not typically dangerous to humans. Although try telling that to someone who inadvertently gets close to them!

They are curious creatures by nature and may approach a boat to see what it is all about. Whale watching is still a very popular pastime as we are just fascinated by these amazing animals.

And it is one of these amazing creatures that has just been found dead in the Amazon jungle.

Found on the island of Marajo, off the Araruna Beach, experts experienced difficulty reaching the carcass at first due to its location amongst the tress and overgrowth.

Brazilian wildlife experts who rushed to the scene were left confused as to why a humpback whale was so far inland and what exactly it was doing on the north coast of Brazil at this time of year.

Renata Emin from the Bicho D'agua Institute said: "We're still not sure how it landed here"

Normally humpback whales are seen in Brazil but only between August and November.

This is when they both mate and deliver their offspring before migrating to Antarctica for the warmer months.

In fact, the whale was only found due to the presence of birds of prey circling above the carcass.

Vultures had already began to scavenge on the carcass so experts had to move quickly to take samples from the whale for further investigation.

The whale has been identified as a 12 month old calf, weighing in at an impressive ten tonne.

Measuring at 36 feet long it seems incredible that this mammoth creature could be thrown so far inland from even the roughest of waves.

Experts believe the calf must have become separated from its mother.

As the mother and calf migrated between the two continents, it is believed that the calf must have become lost. Poor thing!

We imagine it played out a bit like this.

Although it is thought that whales actually have very good memories and that they may be able to recognise familiar boats or remember previous places where they have hunted successfully and be able to return there.

The humpback was examined by the Bicho D'agua Institute to try to determine the cause of death.

No injuries were found on the whale so forensics have been taken to try and find out what killed this young humpback. They believe that it was already dead when it became marooned on the land.

In particular the biologists have been checking for wounds or marks that could have been made by a net or a passing boat.

They will also check for any internal wounds or diseases that could be the cause of death by sending samples back to their laboratories.

Some have speculated that the cause of death may have been from ingesting marine plastics.

Whales swallow hundreds of thousands of cubic metres of sea water a day as they feed on small fish so the risk of them ingesting microplastics that are floating in the water are high which can be toxic to their bodies. Not to mention the danger of them swallowing larger items such as a plastic bag which would make it very difficult for them to continue to feed, resulting in death.

Due to its size and position, the body of the whale will have to be left where it is.

Dirlene Silva, from the state environment department, has confirmed that the humpback will need to remain where it has been found as a bulldozer would not be able to get access due to a nearby swamp.

But its skeleton will be preserved.

Once the carcass has decomposed, the skeleton will be sent to the Emilio Goeldi Museum in Belem, Brazil.

Although a very rare occurrence, this has in fact happened before in the Amazon.

In 2007, a minke whale became stranded on an Amazon sandbank and although local rescuers were able to see it free, it was sadly later found dead a few days later. Not this particular minke though who is hopefully still happily swimming around Australia!

And this has happened elsewhere across the globe too.

Three dead humpback whales have been found beached in North Carolina in just 5 days this month. Causes of death have not yet been determined.

And another humpback was seen in distress on Virginia Beach in 2017.

By the time the local marine team had arrived the whale was dead. It was identified as a calf, measuring less than 30 ft. in length.

One was even found in a Sydney seaside swimming pool.

Although beached whales are common in Australia, this particular humpback must have been washed over the safety chain of the pool by a rough waves to have reached its final resting destination.

As you can see locals were more than keen to get a glimpse of this massive dead whale on the beach. Although horrible, it is a sight that will only be seen once in a lifetime.

But why is this happening so much?

Surely there must be a way to prevent these type of deaths from happening?

Ships can cause injury to whales.

Either by hitting into them or by wreckages or oil spills causing them to be injured or instantly killed.

Noise pollution is another factor.

Overbearing noises from large ships and also from noise bombs that are used ahead of drilling can seriously disorientate a whale, in some cases so much so that they are forced into shallow waters and can become beached.

But its not always the fault of humans.

Sharks and other big creatures of the sea can also force a whale to move to seemingly safer waters nearer the coast. Unfortunately as we have seen, this is not always the safer option for these whales.