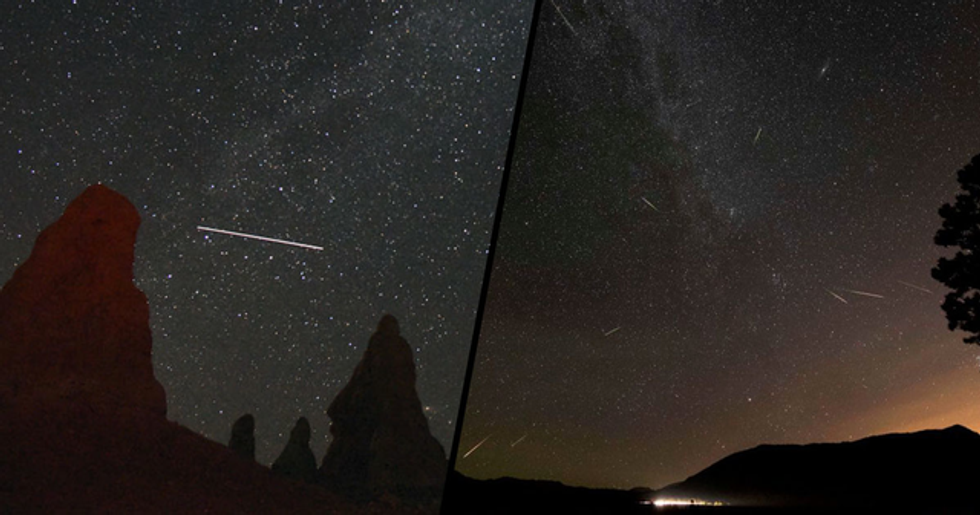 If you look up to the evening skies this weekend, you may see something pretty special.

On Sunday night this week, you'll be able to witness the remarkable Leonid meteor shower, which occurs only once every thirty-three-years. And, if the skies are clear, stargazers will be able to see between fourteen and fifteen meteors per hour.

But weather forecasters have predicted that the shower may only be visible from certain locations, and only at a certain time of the evening... Keep scrolling for more information.

On Sunday, the remarkable Leonid meteor shower will take place.

And, even more excitingly so, some of the greatest meteor showers ever to have happened have occurred from the Leonids.

What exactly is a meteor shower?

And they're often referred to as "shooting stars" because of the strikingly dazzling mark they leave in our skies.

The dust and debris "light up" when they hit our earth's atmosphere.

And that's how we're able to see them from such a vast distance.

But Leonid showers are particularly special...

Because, to make a meteor shower Leonid, the comet dust has to have been left behind by one particular comet.

The Comet Tempel-Tuttle, to be precise.

The Leonid shower occurs only when meteoroids, small rocks, fall towards the Earth, after breaking off from the Comet Tempel-Tuttle.

They only happen once every thirty-three-years...

The pea and sand-sized bits of dust and debris were left by the Tempel-Tuttle comet, which last crossed Earth's orbit in 1998, and will one day return again, roughly around the year 2031.

And there's another reason why Leonid showers are particularly special...

Because, known for their brightness and color, the Leonids feature some of the fastest moving rocks of any shower, traveling at a staggering forty-four miles per second.

And, this weekend, we're going to see one.

Yep. The time of the Leonid meteor showers is officially upon us!

The shower is predicted to be best viewed after midnight on Sunday...

And if any of you keen photographers want to photograph the momentous occasion, NASA recommends using a wide-angle lens to get as much of the sky as possible.

But the best part of it all?

No special equipment will be needed, as the meteor showers are able to be viewed by the naked eye.

So if you simply want a good view...

It has been recommended to find a spot with as little light pollution as possible - A.K.A, an area with no surrounding street lights or tall buildings. "Go outside, find a dark sky, lie flat on your back and look straight up," NASA meteor expert Bill Cooke said, "And be prepared to spend a couple of hours outside."

And there are certain areas where the shower can be best viewed...

Areas from the Gulf Coast through the Ohio Valley and into Atlantic Canada, as well as the southwestern and intermountain West, are predicted to have Sunday night's best views.

But the meteorologists have warned...

There will be fewer meteors visible in the sky than in previous showers, due to natural light pollution from the bright, very nearly, full moon.

Make sure you don't miss it!

This shower happens once every 3 decades... So make sure you have your stargazing goggles out and ready on Sunday night!