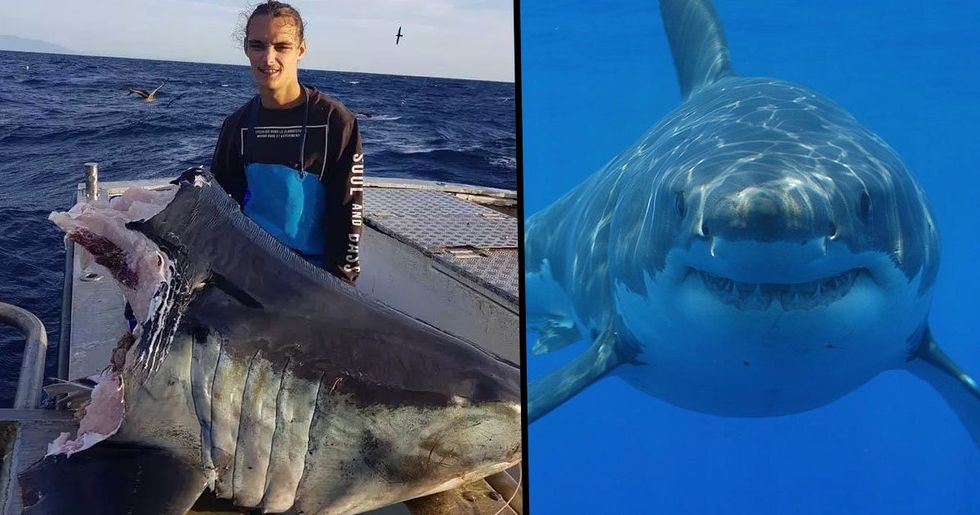 It sounds like the opening to a monster movie: an unexpecting fisherman finds the head of an enormous predator, truncated at the neck, torn apart by something far more dangerous lurking down there in the deep - let the opening credits roll.

But this is not a movie, it’s real. A fisherman named Jason Moyce, aka Trapman Bermagui, pulled up a one-hundred kilogram severed shark’s head onto a fishing ship. It was a mako shark, and it was presumably eaten by something much bigger - but what could it possibly be?

People on the internet are satiating themselves with speculation.

It started with a fishing trip…

Just off the coast of Sydney, a little boat swayed against the tide.

Jason swung his net over the side.

And it became stuck on something. Something heavy. What could it be? There was no pressure pulling the other way... whatever it was - it was dead weight.

As he pulled it up, a shape began to emerge.

“Crikey!" He said to himself, “I’ve only gone and caught a shark!"

But something had gotten to it first...

As the flat, dead eyes of the creature broke the surface, so did its truncated neck.

"Surely nothing’s that big?", he thought to himself.

He took a photo with the head.

The little boat rocked under the weight of the catch.

Jason started up his boat and headed home.

Who knows what stirred underneath him?

We don’t know about you, but we've always been terrified by the sea, and what the sea intends to hide from us…

Now, we may have gotten carried away a little there…

But that's essentially the story. Carry on reading for some more details!

The fish was a mako shark.

These fish usually reach an adult mass of around two-hundred kilograms. They don't usually get as big as the one that Trapman Bermagui found...

"Monster mako", as described by Jason.

One hundred kilograms! That must be less than half the total weight of the creature.

Jason commented on his find:

"So this was all we got back of this monster mako. Unfortunately, we didn't see what ate it but must of been impressive!!"

They’re the fastest sharks and can swim up to forty-six miles per hour, so they’d easily break the speed limit on most suburban roads.

Forty-six miles per hour is roughly the speed of your average jet ski!

So what creature could have done this?

Could it be a prehistoric monster?

It couldn’t be a megladon, could it?

Megladons are now extinct, and they have been for 3.6 million years. It's thought that they were a bit like great white sharks, only slightly more heavyset.

It couldn't have been a megladon, but people are certainly speculating about it.

Before the megladon shark became famous, when Jason Statham punched one in the face in The Meg, it made an indelible mark on the internet.

Everything about this is great. The crappy CGI plane, the literal jumping of the shark, the reaction of the groom-to-be. It’s masterful.

Sadly, the chances of the culprit being an extinct shark is quite low...

So what else could it be? Keep scrolling to find out.

Great white sharks can actually grow to quite a size. It may have been a particularly savage one.

This is the biggest one ever sighted.

What did the internet think?

Let’s take a moment to hear what the online community has to say.

"Great White more than one as well, you can see the smaller conveyor teeth outside major bite marks, not Orcas they tend to eat just the liver of large sharks and let the rest drop to the ocean floor."

“Looks like it's been hit by two sharks to me… Great shot fella!"

“Big tiger shark for sure…"

“Doubt it was a shark that ate it, probably an orca."

We're not even sure that we want to know what kind of creature could do such a thing. We think we'll stick to the scary shark-monsters in the movies for now.