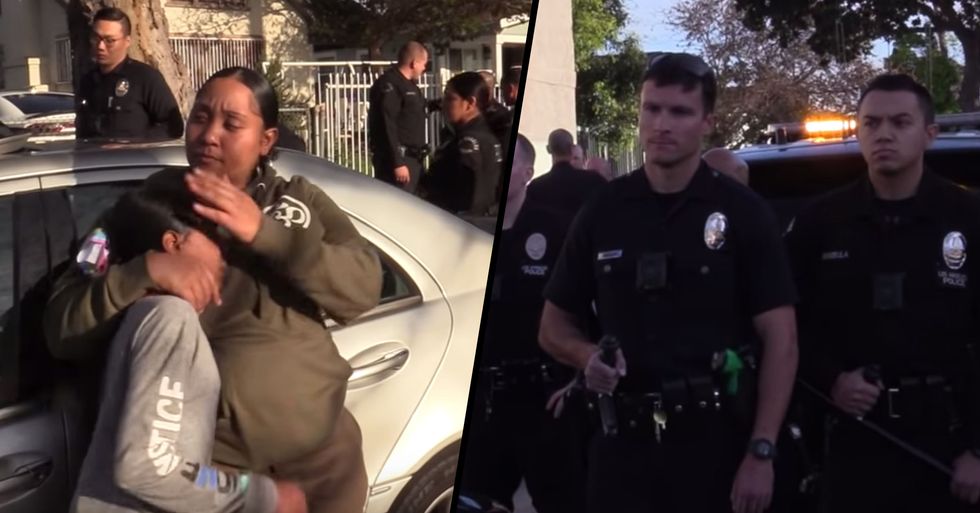 There will always be people who, despite repeated warnings, won't follow the rules - and that's no exception when it comes to the current lockdowns due to coronavirus.

On Saturday evening, a huge squadron of armed police officers were forced to break up a 1-year-old's birthday party in LA and the incident looked to be absolutely terrifying.

The whole thing was caught on camera. Keep scrolling to watch the shocking footage yourself...

"Safer at home" orders are no joke.

Several areas have been forced to go on lockdown due to the coronavirus pandemic, including LA, which issued the "safer at home" order on March 19.

What exactly does the order mean?

All public gatherings are banned and no travel is permitted unless it's absolutely necessary.

The whole point is to try and slow the spread of the virus.

But it seems not everyone has been listening.

Just a couple of weeks ago, Florida beach was jam-packed with spring breakers.

And even though, at the time, many beaches in the area had been closed due to the pandemic, visitors still flocked anyway.

Outraged was ramped up when this guy decided to defined his actions.

You'll probably know his face by now. The young man who was partying in Miami told CBS Evening News: "If I get corona, I get corona. At the end of the day, I’m not gonna let it stop me from partying! I’ve been waiting a while… we’ve been waiting for Miami Spring Break… for about 2 months."

A young woman expressed her annoyance at the virus ruining her Spring Break. “It’s really messing up with my Spring Break, what is there to do here other than go to the bars and the beach? And they’re closing all of it… I think they’re blowing it way out of proportion," she (unbelievably) said.

Some people are clearly struggling to adopt the new lifestyle.

And are clearly unable to distinguish what counts as an essential activity. Drinking and lounging on the beach, for example, isn't essential travel.

This was sadly just the tip of the iceberg.

As an incident this weekend has proven.

On Saturday evening, police in LA received a call with reports of between thirty and forty people gathered at a home.

Despite the safer at home order already having been issued.

The gathering was reportedly for a 1-year-old's birthday party.

And when the officers turned up to break it up, several of the party-goers became irate.

So, the officers made a call for back up.

The incident, which was caught on camera, was then declared as an "unlawful assembly."

In the video, officers can then be seen forming a line across the street...

And slowly marching to force the crowd back.

But it seemed this only annoyed some of the people even more.

At this point, officers were backed up with several squad cars and even a police helicopter overhead. But the crowd continued to get angrier.

Some of the women clung on to children and refused to move.

Until police eventually physically pushed them along.

A number of officers could be seen with bright green bean bag guns.

And were ready to open fire.

Officers then issued a blunt warning.

They stated via a loudspeaker that officers were prepared to use "less lethal munitions, which pose a serious risk of injury for those of you who remain."

Officers also warned that those still gathered in the intersection would be arrested if they chose to stay.

It has been proven that locking down public areas and avoiding social situations has helped reduce the chances of spreading the already out-of-control virus.

The LAPD later stated that no arrests were made.

But it's sad to still see people failing to comply with the social distancing rules.

Interested in more coronavirus news? Keep scrolling to see all the celebs who are trying to cheer us up during the pandemic. Just wait until you see the video of John Legend…