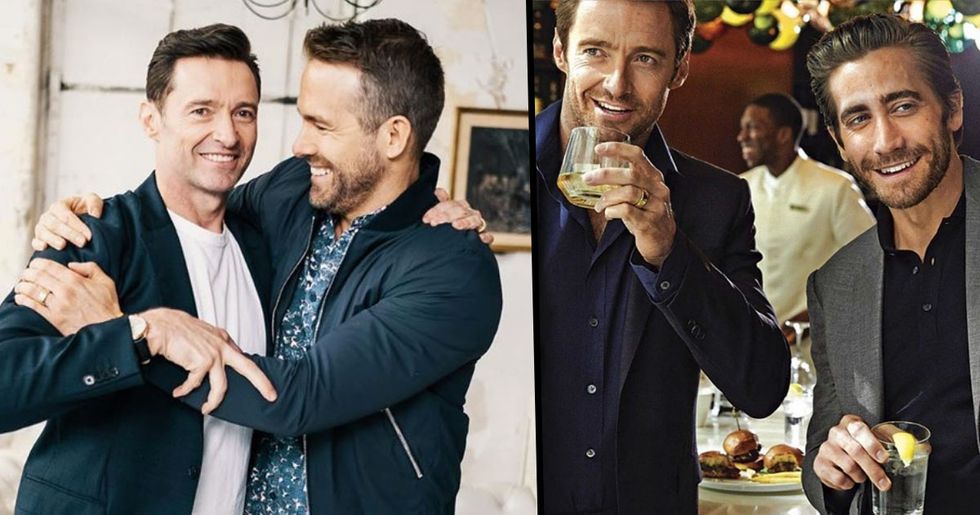 According to the internet, it was "Best Friend Day" yesterday - prime time to show appreciation for our closest friends. In true celebration, the internet was full of anecdotes, photos, and tweets detailing the best of the world's friendships.

However, it seems like actors, Hugh Jackman, Ryan Reynolds, and Jake Gyllenhaal got into the spirit of the day in a more unconventional way - and the internet has been going crazy for it.

The Hollywood trio has a long history of showcasing their friendship in a let's say, unique way, so we weren't surprised that their Best Friend Day social media posts were pretty hilarious, to say the least.

Hugh Jackman and Ryan Reynolds have been friends for the longest, after meeting on the 2009 X-Men Origins: Wolverine movie set. Jackman and Jake Gyllenhaal met while co-starring in the 2013 film Prisoners, while Reynolds and Gyllenhaal met on the set of the 2017 film, Life, so it was pretty inevitable that Gyllenhaal would end up as the newest member of the ever-pranking friendship group. The three actors also all star in infamous superhero movies - Jackman as Wolverine in the X-Men franchise, Reynolds starring in the more recent Deadpool films, and Gyllenhaal, who is set to star in the latest of the Spider-Man movies, Spider-Man: Far From Home - which hits the box office in July.

While the three friends aren't often seen all together on the red carpet, it's clear that they've grown close - and the internet seems to be in full support of the trio. After all, there's a constant stream of tweets from fans hailing the their friendship, and we can definitely see why...

If you follow any of the three actors online, you'll know that they love to prank each other... and their jibes are hilarious.

One scroll on any of their feeds will show a multitude of hilarious pranks on each other, but more on that later...

Believe it or not, the trolling initially began between just Jackman and Reynolds.

Since meeting a decade ago, the pair jokingly started mocking each other online. Over the years, the jokes have been getting funnier and funnier - and the internet laps it up every time.

The faux-feud first kicked off after Reynolds posted this hilarious video in 2015.

The Deadpool star mimicked Jackman’s Australian accent while in his full Deadpool costume, jokingly urging fans to vote for him for People's Sexiest Man Alive (fun fact - both have actually won this award previously).

And it just gets better from there...

Renyolds brutally claimed that the fans in Jackman's picture were actually protestors.

If you hadn't guessed, Reynolds is often the instigator.

After Jackman tweeted a photo of him and his wife to mark their 22nd-anniversary last year, Reynolds just couldn't help himself.

But Jackman has also dished out his fair share of digs to his acting friend.

In this tweet, Jackman jokes about only hugging Reynolds when it's his birthday.

Reynolds was quick to hit back with this witty response.

"This man is a monster. He’s not even from Australia. He’s from Milwaukee," the star wrote.

Fans also started joining in on the fun.

Reynolds' joke about Jackman and his wife took the internet by storm, and it wasn't long until fans started getting in on the joke too.

However, their faux-feud was turned up a notch after Reynolds (shock horror) tweeted this...

The star took to Twitter to post a video ripping Jackman to shreds, captioned: "How well do you really know RealHughJackman?" "Hugh Jackman's upcoming performance in The Frontrunner has fooled some people into thinking he deserves an award, but before voting begins, some people should consider these facts," Reynolds says during his video.

But it didn't take long for Jackman to finally fight back.

A few weeks after Reynolds' latest jibe, Jackman posted his very own video "exposing" the actor. Jackman can be heard narrating the "truth" about the Deadpool actor over a montage of images of Reynolds, even throwing in a hilarious dig at Reynolds' "sexiest man alive" win, saying: "The truth? Ryan Reynolds was only named People Magazine's Sexiest Man Alive in 2010, the year after he met Hugh. Coincidence? Please".

Fan's reactions to the fake beef were just as funny.

This fan called the pair "pure gold" in response to Jackman's video.

This fan was very much team Wolverine.

Then, Jake Gyllenhaal tried his hand at the banter, in what's probably one of the funniest pranks that the actors have pulled off...

In what was arguably the height of the online beef, in December, Gyllenhall and Jackman well and truly pranked Reynolds.

As the trio attended a Christmas party, it seems like Ryan Reynolds didn't quite get the memo about one important thing...

Fans loved the prank, to say the least.

This fan hailed the stunt "the greatest gift" they could have received.

Their superhero past not only gives the trio a lot in common, it is also a lot to joke about if this hilarious edit by Gyllenhaal is anything to go by.

But, it seems that their frequent social media banter is actually for a good reason.

Speaking about his acting bestie, Hugh Jackman, Reynolds told Entertainment Weekly that the constant teasing is actually part of a "campaign" to get Jackman to reprise the role of Wolverine in a team-up movie featuring the duo. “He and I have great chemistry, and I love goofing around with him. “So really this is just a long-term hazing campaign that’s only going to get worse…until he says yes," Reynolds said.

In January, the actors called an official truce on their antics.

Earlier this year, the pair called it quits on their back and forth trolling and said that they would be making advertisements for each other's companies - Ryan Reynolds' Aviation Gin and Jackman's philanthropic coffee enterprise, Laughing Man Coffee.

It seems like the temptation to troll each other became too much as Jackman, Reynolds, and Gyllenhaal were back at it again yesterday as they celebrated Best Friend's day with a series of Instagram posts.

Kicking off the Best Friend's Day trolling was Ryan Reynolds...

The Deadpool star was the first of the superhero-trio to post on Instagram to mark the occasion, uploading an image of him and Jackman with the caption: “Happy #BestFriendsDay to Jake Gyllenhaal! (Not pictured)."

In response, Jackman uploaded an image of him and Reynolds, teasing the star for being "clingy".

Jake Gyllenhaal then joined in with the antics.

In a similar post to Reynolds', Gyllenhaal took to Instagram (which he's only had for a month) to roast Reynolds, captioning his picture: "Happy #bestfriendsday to Ryan Reynolds (not pictured)".

Reynolds' response in the comments section was just as funny.

Jackman commented on Gyllenhaal’s Best Friend Day post, jokingly saying that the pair will go to dinner without Reynolds. Then, Reynolds hit back with a jibe about Jackman's height: “True story… Hugh is just under 5 feet tall".

How did the internet react to the trio's latest faux-feud?

If you don't think Ryan Reynolds, Jake Gyllenhaal, and Hugh Jackman have the best friendship then you are wrong. https://t.co/FnyFV42eEF
— Viviana (@Viviana)1560034266.0

We're sure that you aren't surprised to hear that the Best Friend Day stunt went down like a treat on planet internet. Fans have been taking to Twitter to shout about how the group are "friendship goals".

It seems that the internet just can't get enough of the actors, with this fan hailing them as the "best trio ever".

This user joked at how the trio "roast" each other at every opportunity.

You have to admit, it's pretty funny.

Another urged them to star in a comedy together...

The fan seems certain that it would be Oscar-worthy.

Now the actors have broken their short-lived "truce," we hope they continue roasting each other.

They may all be busy with their blockbuster hits, but we can't help but think that this is the start of a new-wave of epic jibes. Fingers crossed this latest antic isn't just a one-off.