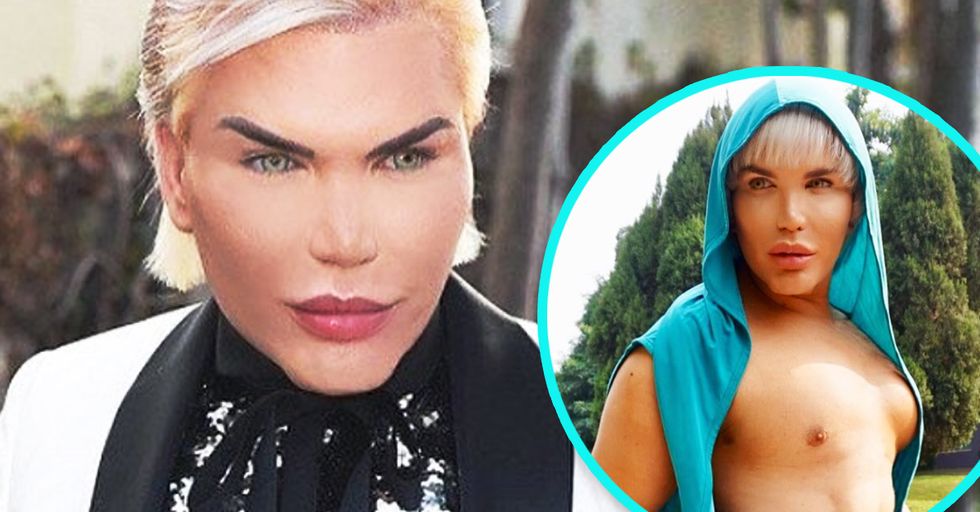 Rodrigo Alves, also known as the Human Ken Doll, is on a journey to achieve the perfect body (whatever that means). He's famous for undergoing dozens of surgeries to make him look, well, like a life-size Ken doll.

Even though Alves has already spent more than half a million dollars on procedures, which is so many dollars, he's not done yet. His latest surgery — to remove four of his ribs — might be his most drastic yet.

The man known as the Human Ken Doll grew up in Brazil believing that he was born in the wrong body. And he's taken more than a few steps to correct this perceived problem.

Alves has had 60 surgeries and procedures to fulfill his desire for the perfect body.

"I get a lot of attention due to my artificial looks," he says, "but I finally love myself and that is the most important thing of all."

Growing up, Alves was bullied at school for his looks.

In one incident, bullies pushed his face against a urinal because of how wide his nose was. Alves used to watch Disney movies and wish he looked like the charming princes he saw on screen.

He had his first surgery at the age of 17, and he hasn't looked back.

Although he has seen a psychologist and diagnosed with Body Dysmorphic Disorder, that hasn't stopped him from getting procedure after procedure to help transform his body into something he's finally comfortable with.

Two weeks ago, Alves made possibly the most drastic move he has so far — he had four of his ribs removed.

Taken out of his body! Originally, he wanted to have six removed, but he had a hard enough time finding a doctor who would remove four. Alves appeared on British daytime TV show This Morning to share the story of his surgery...

"I visited three different doctors: two here in Europe, one in America, and had all my tests and exams done, and they said well, we can only do four."

Alves chose a doctor in Beverly Hills who performed the procedure, and Alves said he's extremely happy with the results.

The hosts of the show then pointed to a jar on the table, in which Alves actual ribs sat in liquid. (The picture is quite gruesome. You can watch the video at the bottom of this page to see them.)

When the hosts asked Alves why he got the surgery, here's what he had to say: "Thanks to plastic surgery today I'm able to express myself through fashion, right?" He goes on to explain that all his blazers have to be altered because he was a bit bigger around his middle.

With this procedure, Alves is able to wear a blazer without having to have it altered. That was a major reason he had the surgery!

In the video, he's wearing a corset because he had only had the procedure two weeks before, and his spine was extra delicate. It could also be quite dangerous for his internal organs.

Alves explained that the ribs that he had removed were the 11th and 12th ribs, also known as "floating" ribs.

According to him, these ribs don't actually have much of a use, so it was fairly safe for him to have them removed. He said that although he thinks he's the only man to have the procedure done, he believes it's quite popular among women, especially in LA.