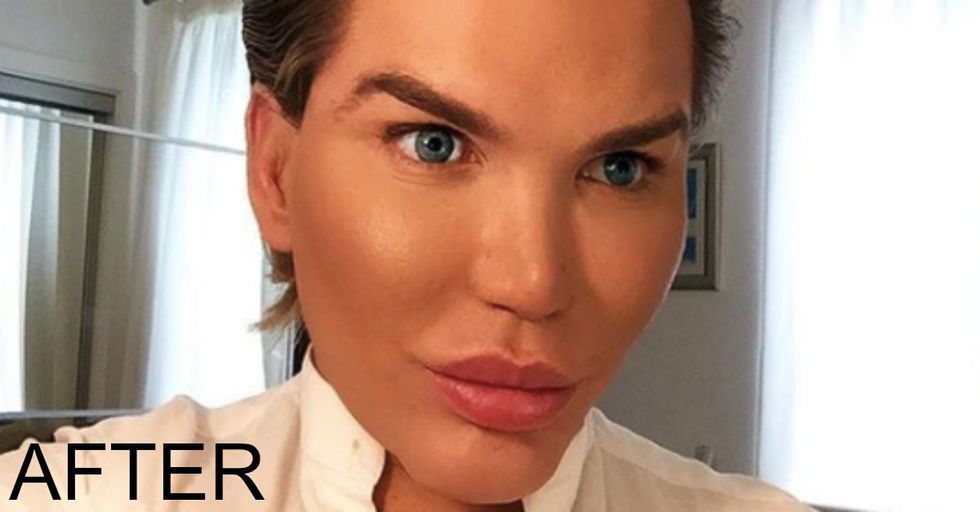 Growing up in Brazil, Rodrigo Alves had a pretty typical childhood, but his adulthood has been anything but.

Watching Disney movies as a kid, he constantly found himself identifying with the handsome princes. There was just one problem. In his opinion, he looked nothing like a prince. He took matters into his own hands and decided to fix that.

Over half a million dollars, 58 surgeries, and 17 years later, he finally feels like he has the body he was always meant to have.

But what did he look like before all of that?

When Mattell first introduced the Ken doll in 1961, he was created to be Barbie's fictional boyfriend.

Most people who look at a Ken doll see him as just that. He's just a toy. But when Rodrigo Alves looks at a Ken doll, he doesn't see "just a toy." Instead, he sees what he's always wanted to become.

So that's what he set out to do. Become a living, breathing Ken doll.

Alves believes he was born in the wrong body and has gone to extensive lengths to fix that. The result may look a little unnatural to some, but Alves finally feels as though his outward appearance matches how he feels inside. "I get a lot of attention due to my artificial looks," he says, "but I finally love myself and that is the most important thing of all."

His appearance is the result of many surgeries. 58 of them in the over the past 17 years, in fact. He's spent £450,000 (approximately $588,00) on various surgeries on nearly every part of his body — from hair implants in his scalp, to gel fillers injected into his arms, to a fake six pack sculpted in his abdomen.

The results are dramatic, but so is the amount of happiness Alves feels as a result.

"People may think I am crazy," he says. "I am not. I have had psychological help. I was born in the wrong body." He also loves the way that clothes fit his new body. "I have always loved fashion," he explains, "but I was never able to fit into a smart blazer or suit because my body was not symmetric." That's all changed now.

So, what started Alves on the path to his current look?

Alves knew from a young age that he was born in the wrong body. But what did he actually look like as a child?

Recently, Alves shared pictures of himself from his childhood and young adulthood.

As you can see, he was a pretty cute kid. In school, he was badly bullied for his looks. Once, bullies even pushed his face against a urinal because of how wide his nose was. Alves grew up watching Disney films and often found himself wishing he looked more like a Disney prince.

As he got older, he began the journey of making his outward appearance match his inward desires.

Alves sought out his first surgery at the age of 17 after being diagnosed with gynecomastia (enlargement of male breast tissue). He had an operation to remove the excess tissue, and knew at that point that it was the beginning of a long journey to reinvent himself.

Alves began seeking out more and more plastic surgery while he was away at college.

At first, he would just find the most expensive plastic surgeon in his area and use them. As a result, he learned an important (and expensive) lesson. "This taught me that expensive doesn't mean good quality, and that what makes a good surgeon is the practice," he says.

When he flew home to Brazil, having already had several surgeries, his family was initially shocked to see his transformation. They encouraged him to see a psychologist. Alves attended therapy for a year and was diagnosed with Body Dysmorphic Disorder. This is an anxiety disorder that causes people to see flaws or defects in their own appearance.

These pictures show what Alves' body looked like prior to being sculpted into what he has today.

After 16 liposuction surgeries, however, his current body is nearly unrecognizable from these "before" images. Alves has recently learned that his body is not completely incapable of handling any further liposuction surgeries. "Internally, my body is a web of scar tissue," he's reported. Since liposuction is no longer an option, Alves has a new plan to continue his transformation...

For the first time in his life, Alves is electing to change his body through diet and exercise rather than plastic surgery.

He has also become an official ambassador on the subject of body image and plastic surgery. In conjunction with the Aesthetic Academy in the USA, Alves will be speaking openly about the taboos associated with plastic surgery in the hopes of helping other people who are suffering from Body Dysmorphic Disorder.

You can watch an interview with Alves here:

Although some may find his looks objectionable, what's important to realize is how happy Alves is with his current look. We hope his new plan of maintaining his health provides him with many more years of happiness!