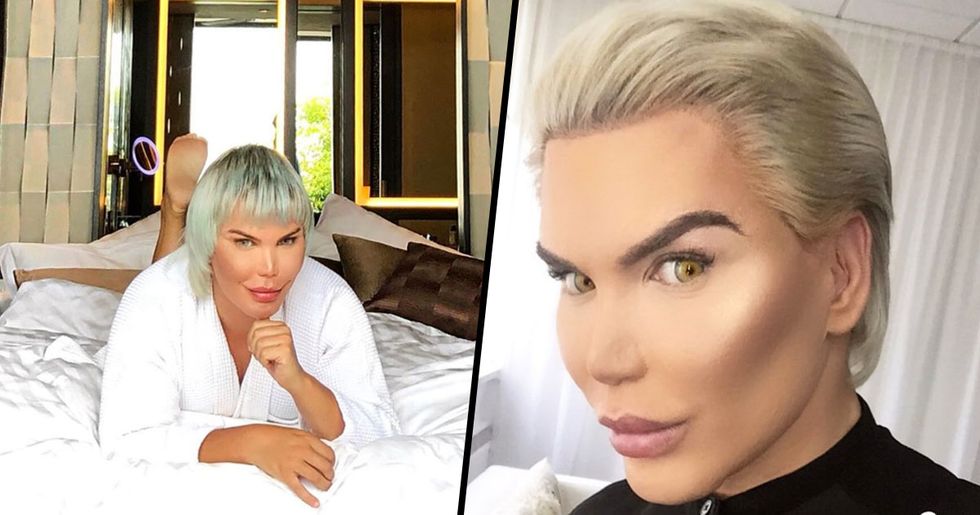 Human Ken Doll Says Nose Is Collapsing After Spending Over $700,000 on Surgery

In today's day and age, it's pretty easy to alter and tweak your appearance.

Because of their easy accessibility, cosmetic procedures are booming and, of course, there are always those who take their love for plastic surgery a little too far.

Rodrigo Alves, known more commonly as "The Human Ken Doll," has spent hundreds of thousands of dollars redesigning his entire face and body using cosmetic surgery. The Brazillian native was always unhappy and uncomfortable in his own skin and is convinced that he was born in the wrong body.

But now, it looks like Rodrigo has gone too far, as he says his nose is collapsing after undergoing several surgeries.

Now, the star fears that doctors won't be able to fix his "sinking" nose...

Having gone under the knife over seventy times, the thirty-six-year-old's obsession with resembling the shiny and chiseled plastic doll has clearly reached extreme new levels.

He explained, "I have always been a very creative person, I grew up watching Disney movies and I wanted to look like a prince when I was a child." And from this vision, the Human Ken Doll was born.

This unique look has given him international fame.

Though he was born in Brazil, Rodrigo relocated to London when he was nineteen and has since become somewhat of a TV personality, subsequently raking in an 800,000-strong Instagram following.

He has appeared on a variety of reality TV shows...

And caused controversy when he starred in the British reality show, Celebrity Big Brother, for using racial slurs towards other housemates. Though Rodrigo went on to defend his 9-day stint on the show, claiming that he had struggled with not having access to his mobile phone or friends and family.

Yet, despite his outlandish behavior...

His extreme "plastic" appearance is still the primary factor in his fame.

He was only seventeen when he underwent his first cosmetic procedure.

Speaking to The Sun, he said: "My first plastic surgery was at the age of 17 when I was diagnosed with gynecomastia, the growth of male breast and chest tissue."

Tissue from his breasts was removed.

But Rodrigo knew that he wanted to have more work done. "I had an operation to remove the excess tissue. I knew then that plastic surgery was available, but I was far too young for having all that I wanted doing which was to reinvent myself."

However, his cosmetic journey didn't get off to the best start...

When he moved to London to study at university, he received a couple of botched jobs. "While I was a student, I had my first few surgeries but with poor results. I was very young and I would just find surgeons online and go to the most expensive ones in Harley Street."

He went under the knife several more times to perfect his look.

And he learned how to source professional and effective cosmetic surgeons. "This taught me that expensive doesn't mean good quality," he explained, "And that what makes a good surgeon is the practice." Rodrigo has since had a total of ten procedures... on his nose alone.

And once he had started, he couldn't stop.

You name it, he's had it. Hair transplants, botox and fillers, pec implants, liposuction, and rib removal are just a few on Rodrigo's intensive procedure list.

He even had artificial abs implanted.

Yep, that dazzling six-pack was actually sculpted by a surgeon, with the silicone implants costing him a staggering $26,000.

Though he is the first to admit that his muscles are somewhat deceiving. Speaking to the Daily Mail, he said, "People say to me that I look so fit, but darling, my abs are fake. I have silicone implants. My arms are fake and full of filler."

However, this glamorous image holds a dark secret.

Rodrigo was never comfortable in his own skin and suffered at the hands of bullies throughout his childhood and adolescent years.

Rodrigo has suffered from insecurities about his appearance since he was a child.

He was picked on tirelessly by his peers, who mocked his “boobs" and pelted him with jibes about his weight and figure. On top of all of that, he was targeted for his “big nose" and was subsequently nicknamed “potato nose" and “jelly belly."

He recently opened up about his childhood traumas.

“I do not like to focus on the past because it makes me upset," he said, speaking on the British TV show, Loose Women, last August. He also claimed that he had been “pushed down the stairs and had my face pushed against the wall." “Growing up I felt alone as nobody wanted to be friends with me. Because of my body image and the fact that I was shy, I avoided social situations."

Years of bullying took a noticeable toll on Rodrigo.

And, after his appearance started to vastly change, he was diagnosed with Body Dysmorphic Disorder, an anxiety disorder that causes a person to have a distorted view of how they look and worry obsessively about their appearance.

The diagnosis came after family members became worried about his quickly-changing appearance.

And he was subsequently urged to see a therapist about his surgery addiction. "I had cognitive behavioral therapy, which helped me to understand myself."

Rodrigo hated the way that he looked.

And he felt that cosmetic surgery was the only way he could be his "true self." "In my dreams, I look a certain way, but then getting up in the morning and looking at myself in the mirror I didn't recognize myself. This was why I carried on having surgeries, seeking out the best doctors in the USA, Brazil, Europe, and the Middle East to help me become my true self."

And, despite his obsession with cosmetic surgery...

The doctor's deemed Rodrigo as sane. "After one year of treatment, the doctors agreed that I was perfectly sane but that I just had a mirror image issue. I can only describe it as having a feeling that I was born in the wrong body."

He hated what he saw in the mirror every day.

And, with the support of his family, he bought himself a completely new body and face.

His appearance has changed drastically throughout the years.

Revealing photos of himself in his twenties has only emphasized the sheer and somewhat heartbreaking lengths that he has gone through to change the way that he looks.

He admits that things could have been different.

He explained: “My parents were going through a divorce so I didn’t bother them. If they had noticed or the teachers had it would have been a very different situation."

Though he insists that he's happier than ever.

He explained: "People may think I am crazy, I am not. I have had psychological help. I was just born in the wrong body."

His cosmetic journey hasn't all been smooth sailing, however...

In 2016, Rodrigo caught an infection after the sixth of his ten nose jobs. It left him unable to breathe and his face began rotting away. His body rejected the new nose and he suffered necrosis — an infection that sees the skin tissue die and whither away.

And he has now become a cosmetic ambassador, channeling his work into breaking the taboos around cosmetic procedures. "I have been honored by the Aesthetic Academy in the USA and from now on I am will be speaking openly about plastic surgery to break the taboos and to teach people from my own experiences in a simple and easy-going way without medical terminology."

But it seems, this time, he may have gone too far...

The star has revealed that his nose has started to collapse again after having several surgeries around the area.

Eleven, to be precise.

He underwent his eleventh procedure in January this year but is reportedly already planning another procedure...

He's hoping that it will fix his "sinking" nose.

Speaking to The Daily Mail, the star said: "The results of this surgery were very pleasing at first but now I am going to have to have another surgery because it is sinking and I am scared, to be honest.
"Each time is riskier than the last and I'm worried that doctors aren't going to be able to fix my nose permanently."

But this could have really serious consequences...

After his nose job in January, the star said: "My surgeon guaranteed he can fix my breathing, so finally I will be able to breathe again but there is a risk that my skin will not tolerate the surgery.
"If necrolysis develops it could mean I will lose my nose, so I am on antibiotics and hyperbaric oxygen therapy to reduce the risk of that," he added.

But now he's desperately trying to save his nose.

He has been warned by medics that his nose could collapse completely and leave him with a hole in the middle of his face if he doesn't stop having plastic surgery.

Now he fears that doctors won't be able to come up with a permanent fix to save his nose...

But one thing is very clear and very obvious, he needs to stop having nose jobs if he doesn't want his nose to completely disappear. Rodrigo isn't the only person to make headlines over plastic surgery... one mom has recently come under fire for urging her teenage daughter to have cosmetic surgery because "ugly people get nowhere." Wow. Keep reading to hear more about the outrageous mother's claims...