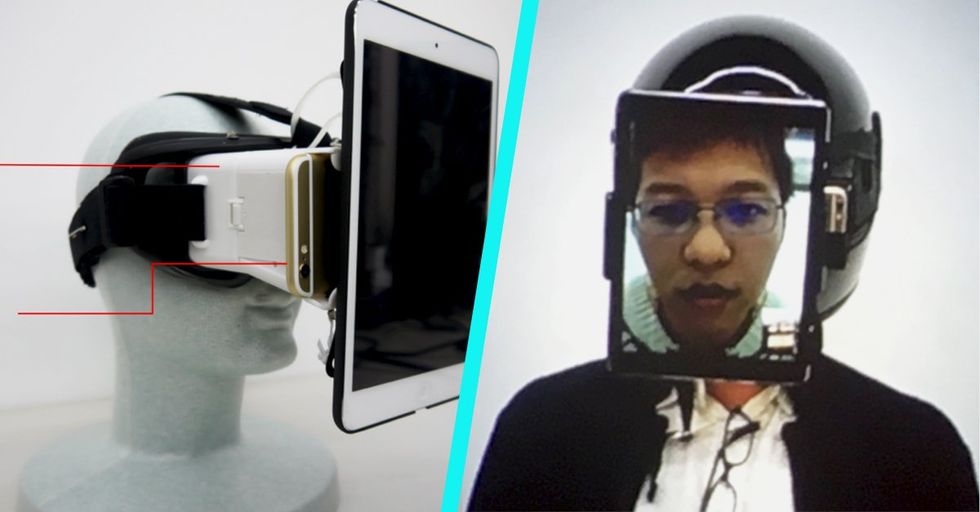 A new and experimental concept referred to as the "human uber" gives new meaning to the phrase 'living vicariously through someone else.' Japanese researchers have developed a type of screen which, when strapped to a person's head, essentially allows them to act as someone else's body. The technology is called ChameleonMask; through it, users can more or less FaceTime through life. The 'surrogate' wearing a screen goes out into the world and the user, watching through a camera, remains behind.

The ChameleonMask's website suggests people such surrogates for long-distance business trips, or even cosplaying purposes.

When MIT Tech Review writer Will Knight tweeted about the ChameleonMask, the internet began to take notice of this bizarre creation.

Knight tweeted a photo of the screen in use. In the same tweet, he also shared that the screen's inventor, Jin Rekimoto, called the technology "surprisingly natural."

Rekimoto himself then tweeted out a link to the project's site, while also acknowledging the polarizing nature of the technology.

Here's a video demonstration of the Human Uber:

The "human uber" website also includes this quick video with visual examples of the tech. "We hypothesize physical and social telepresence can be embodied by a surrogate human who imitates the remote user," the video explains.

The technology was first introduced at the EmTech Asia conference.

You can see the whole setup in more detail here, with the screen connecting to a thick pair of goggle-like straps. This might also look like the plot of a dystopian sci-fi movie.

Of course, Twitter users proceeded to point out some funny (or potentially worrying) pop-culture parallels.

Exhibit A: That time How I Met Your Mother saw Marshall FaceTiming in to a meal via iPad and an awkwardly stuffed Marshall-dummy.

And, of course, Bob's Burgers' Tina remotely attending school through a mobile screen.

Phil bot of the future, anybody?

Basically, this isn't the first time someone has had the idea to make something (or someone) else their surrogates in life.

We definitely shouldn't be living life through our iPads anytime soon, but the "human uber" does raise an interesting alternative for people unable to travel somewhere. Plus, if you really don't want to attend that awkward high school reunion, you could just hire a human uber to do it!