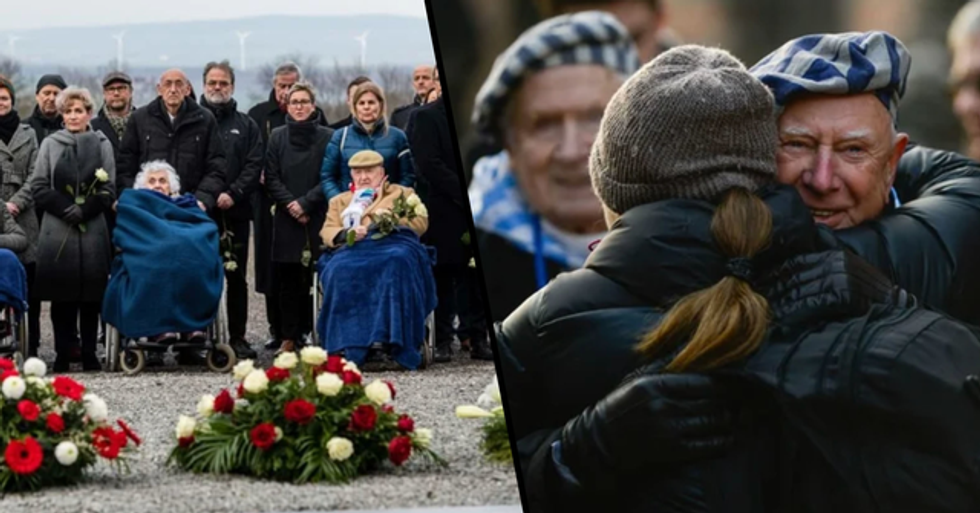 For the seventy-fifth anniversary of the liberation of the notorious concentration camp, Auschwitz-Birkenau, over 200 of the camp's survivors returned through its gates to come together and remember the millions of Jews who lost their lives in the Holocaust.

It was a truly momentous moment as the survivors stood again in Auschwitz's grounds, proudly wearing the blue and white striped hats they had once worn as prisoners, but this time united in the face of anti-Semitism.

Keep scrolling for the full story, and to see the heartwrenching photos from the moving vigil...

The Holocaust was one of the most monstrous atrocities to ever happen in human history.

Over 6 million Jewish people were mercilessly murdered during the 1930s and 40s when Nazi Germany invaded and occupied many parts of Europe.

The Nazis made it their mission to "exterminate" the Jews.

After coming into power in 1933, the nefarious dictator, Adolf Hitler, imposed a series of sick and twisted ideologies upon the rest of Germany.

He believed that Jews were an inferior race.

And, ultimately, a threat to the German race, their purity, and their community.

He spread these messages across the nation...

It was after the German invasion of Poland, and the declaration of WW2 in 1939...

That the Nazis started to officially deport Jewish people from all across Europe to parts of Poland, where they created ghettos to separate them from the rest of the population.

And, when the ghettos became too over-crowded...

The Jewish people were then transported to the concentration camps that had been built all across Europe.

The concentration camps, or death camps, as they quickly became known as, were truly horrific.

Millions of innocent people suffered at the hands of the notorious SS guards in these camps, and they were forced to endure grueling labor, dire living conditions, and painfully sparse food rations.

It was in these camps were most of the Holocaust victims perished.

Many starved to death, while others died of diseases such as typhus and pneumonia.

And for those who managed to survive these harsh conditions and constant hunger...

The gas chambers were what awaited. It was here where hordes of prisoners, under the illusion that they were simply going for a shower, were locked into a brick chamber and suffocated with the deadly Zyklon B gas.

Millions of jews met the fate of the deadly gas chambers.

And their bodies went on to be buried in mass graves, some of which carried thousands of corpses at a time.

And the largest of these death camps was Auschwitz-Birkenau.

Located in Krakow, Poland, Auschwitz played home to one of the biggest genocides in human history, with the German SS systematically killing at least 960,000 of the 1.3 million Jews inside the camp.

The camp was eventually liberated on 27th January 1945...

Thus putting an end to the atrocities experienced at the hands of the Nazis.

The date is still commemorated as the International Holocaust Remembrance Day, with millions of people coming together every year to remember the awful events of the Holocaust.

The Nazis were unable to fully destroy the camp after liberation...

And Auschwitz-Birkenau still stands, cold, empty, and serving as a poignant reminder of the millions of victims every single day.

Parts of the camp have been transformed into a museum...

Which helps to educate the younger generation about the atrocities of the Holocaust, while also keeping the memories of the victims alive.

It remains one of the most recognized symbols of the mass genocide...

And, since it's liberation in 1945, it has received over 44 million visitors from all over the world.

So, for the seventy-fifth anniversary of the liberation...

It seemed only fitting to do something truly special.

Hundreds of Auschwitz's survivors were invited back to the camp...

Were a vigil was held to commemorate the memory of those who weren't fortunate enough to live to see the liberation.

Over 200 of the camp's survivors and their families returned to Auschwitz-Birkenau.

The survivors traveled from all over the globe to attend the vigil.

Including countries such as Israel, the United States, Australia, Russia, and Peru.

The Polish President, Andrzej Duda, commended the brave survivors at the vigil...

"We have with us the last living survivors, the last among those who saw the Holocaust with their own eyes," he told those at the commemoration. "The magnitude of the crime perpetrated in this place is terrifying, but we must not look away from it and we must never forget it."

It was a truly honorable event.

And, heartbreakingly, many of the elderly survivors wore striped scarves and hats to symbolize the striped uniforms they were forced to wear as prisoners over seventy-five-years-ago.

Once again, those who were once held as prisoners within the camp walked under the steel gates of Auschwitz.

And under the sign, "ARBEIT MACHT FREI" which, once translated, reads the horribly ironic saying of, "Work sets you free."

The bravery of these victims is truly astounding...

To return to a place of such trauma must have been incredibly difficult for all the survivors and their families alike.

But the survivors greeted and embraced one another...

A beacon of light in such a dark and treacherous place.

Many of these survivors had lost family members in the Holocaust...

And, therefore, Auschwitz stands as the only real place of closure.

Many survivors spoke at the vigil about their missing family members...

And their heartache over the way they were killed. "I have no graves to go to and I know my parents were murdered here and burned. So this is how I pay homage to them," Yvonne Engelman, a ninety-two-year-old Australian survivor said at the event, according to the Associated Press.

And many simply wept.

As their memories and heartache from their time in Auschwitz came flooding back.

But they all had the same message.

And the same warning. Many noted how anti-Semitism has been on the rise in recent years and warned of history repeating itself.

Ronald Lauder, the president of the World Jewish Congress, gave a damning speech at the vigil...

In which he pleaded for people to be compliant with the fight against anti-Semitism.

“But now I see something I never thought I would see in my lifetime, the open and brazen spread of anti-Jewish hatred. Do not be silent! Do not be complacent! Do not let this ever happen again - to any people!"

To commemorate the anniversary, harrowing photographs from the Holocaust were colorized, which only shed further light on the atrocious acts of the Nazis. Keep scrolling to see...