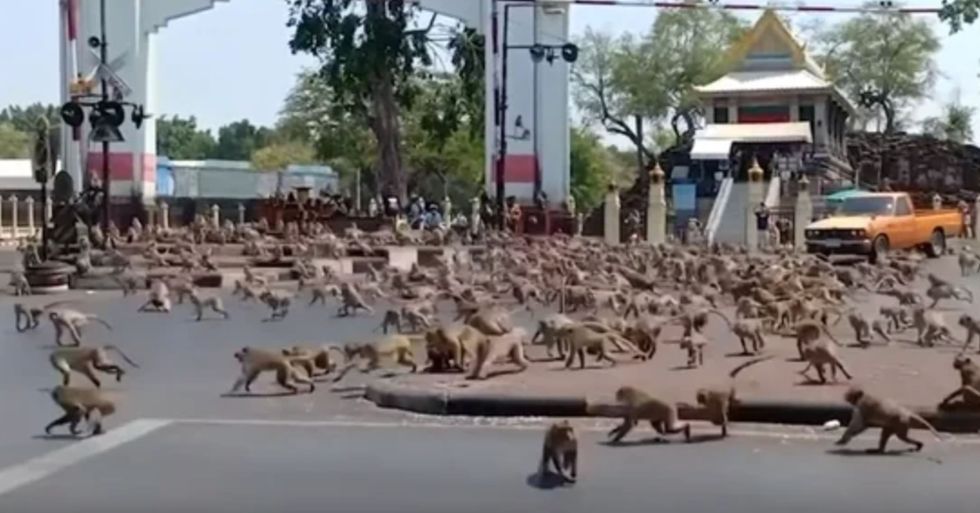 The coronavirus outbreak has utterly taken the world by a storm.

People all around the world are in mass panic and life as we know it has come to a complete standstill... and that's for the wildlife, too.

Footage has gone viral of hundreds of monkeys terrorizing a Thai city in search of food because of the lack of tourists and it is truly shocking to witness.

It has been confirmed by Worldometer that 5,117 people have now died globally, with the majority being in mainland China. A further 139.087 have been found to carry the virus and be infected.

Life as we know it has been turned upside down...

And us humans aren't the only ones affected.

Wildlife all around the world has been affected by these huge changes...

And especially wildlife who thrive from the presence of tourists as people have been advised to not travel or vacation.

Some shocking footage has emerged from Thailand this week...

The video was shot in the Lopburi district and it showed hundreds of monkeys rampaging through the streets.

The monkeys are heard screaming at each other...

And many are seen to be attacking one another and fighting, which isn't normal behavior for packs of monkeys of this scale.

It turns out that the monkeys are fighting over food...

And the one monkey with the banana has caused hundreds of others to fall into this chaos.

Lopburi is a city that brings thousands of wild monkeys and tourists together...

Wild monkeys are a part of the daily routine, and many live in the ground of Lopburi's ancient Buddhist temples. These monkeys get their main source of food from tourists feeding them, so no tourists means no food.

Sasluk Rattanachai, who saw the scene take place outside of her workplace, said to local media, “They looked more like wild dogs than monkeys. They went crazy for a single piece of food. I’ve never seen them this aggressive. I think the monkeys were very, very hungry. There’s normally a lot of tourists here to feed the monkeys but now there are not as many, because of the coronavirus."

The monkeys resemble the scene from an apocalyptic movie...

And it is truly a sign of things to come if this pandemic becomes even more out of control.