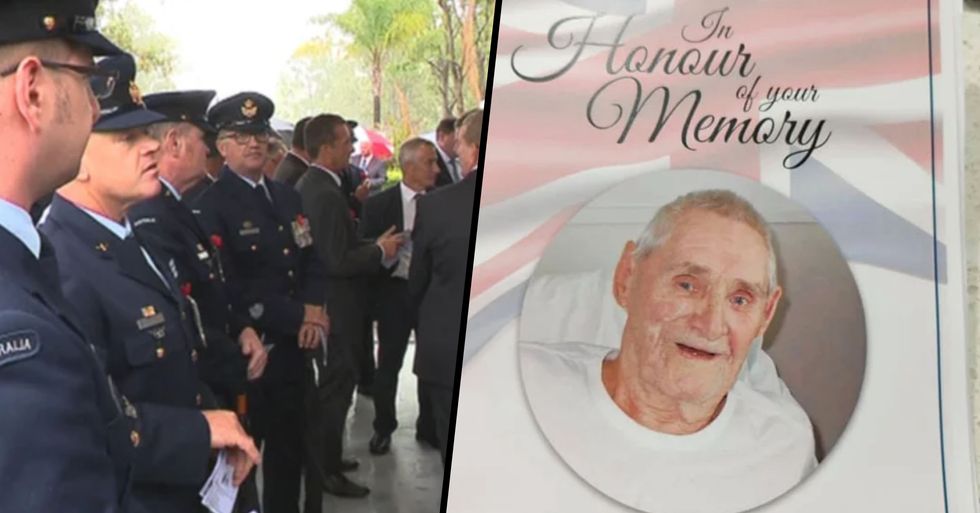 After a ninety-five-year-old war veteran died alone without any friends or family, hundreds of strangers turned up to his funeral to pay their final respects.

Keep scrolling to read the rest of this heartwarming story...

Loneliness has, for some time now, been a growing issue in our societies.

More and more elderly citizens are being plagued by crippling loneliness, with very little support networks available for them to turn to.

But how does somebody find themselves in such a position?

Dwindling families and social circles, poor health, life changes, and even transportation challenges all contribute to the feeling of isolation.

Too many of our senior citizens are suffering from loneliness...

And the latest National Poll on Healthy Aging found that about a third of elderly people here in the United States are lonely.

The effects of loneliness have long been connected to a range of health issues...

Thankfully, people are more aware of the devastating effects of loneliness than ever before...

And more and more charities have been working hard to combat isolation in the elderly.

They are unable to reach everyone in time.

Heartbreakingly, there are many senior citizens who die alone...

Without any friends or family by their side.

And, when this happened to a war veteran in Queensland, Australia...

The local community decided to rally together to give him a proper send-off.

Brian Stanley William Fortune had once risked his life for his country.

Between 1944 and 1945, Brian, who was originally from the U.K, had fought in Palestine as a member of the Durham Light Infantry. This is the only known photo of Brian to exist, where he can be seen in his bed in the nursing home in Ipswich, where he spent his final years.

And, because he had no surviving family or friends, there was no one by his side.

And it is unbearable to think that someone who had fought so valiantly for their country had died completely alone.

But, after his death, a local veterans charity decided to do something special in his memory.

And, when they heard about Brian's death, they were completely devastated.

So they decided to organize a proper veteran send-off for Brian.

They sent out a plea to the local community...

Where they wrote: "Our sub-branch was asked if we could do anything for him and of course we said we will organize his funeral and do a poppy service for him."

They organized a ceremony for March 9th...

With an open invitation for anyone in the community to turn up and pay their respects.

And was flooded with comments of love and support, with many people offering to help track down any long-lost relatives of Brians.

And, on the actual day of Brian's funeral...

Over 200 strangers turned up to pay their respects to the war hero.

People from all walks of life turned up to the funeral...

Serving members of all 3 armed forces in full dress uniforms joined veterans young and old in suits, all wearing their medals and poppies on their chests, and children in their school uniforms were also seen at the service.

The RSL had organized for Brian's coffin to be draped in a Union Jack flag...

And the Ipswich RSL sub-branch deputy president, Michael Blaine, paid tribute to Mr. Fortune's service, though little was known about his military service.

"Sadly much of Stan's life will remain a mystery, and his life's story has passed with him," he said.

One of the nurses also spoke about Brian...

"Stan was a quiet, private man but a great storyteller. He loved nothing more than telling a good joke or a story to anyone who would listen. He was a gentleman, and he would make sure that ladies always had a seat, and he would never speak crudely in the presence of a woman."

More needs to be done to protect our veterans post-war - Keep scrolling to read about the work actor Gary Sinise has done for our war heroes...