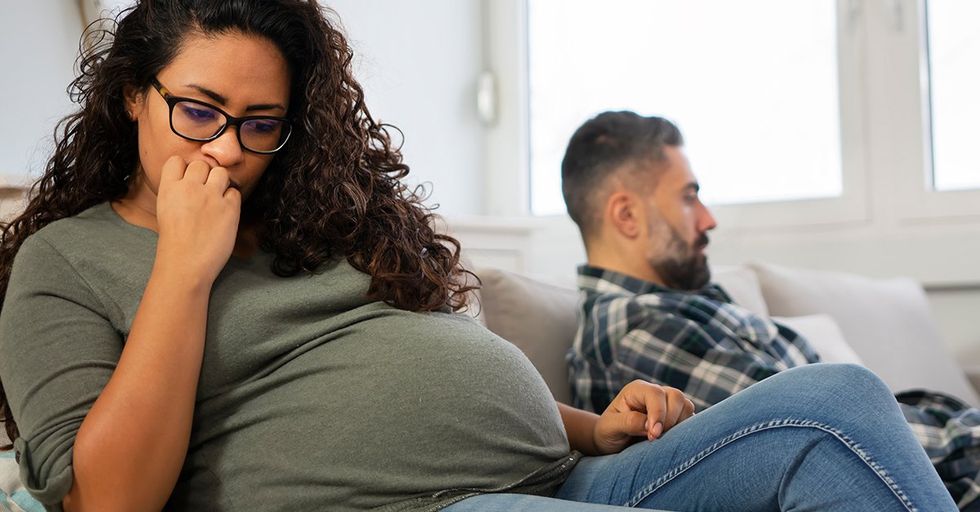 Husband Contemplates Kicking His Pregnant Wife out After She Catfishes Him

Chrissy Teigen recently tweeted about an online thread called, Am I The A-Hole? And it's a great subreddit. It's full of the kinds of stories you would see on Seinfeld or Curb Your Enthusiasm: the petty nonsense that drives us all crazy and forces us to ask, "Was I really being that much of a jerk?"

The stories range from the incredibly petty to the delightfully strange to the profoundly frustrating.

In one particular story, a man found something out about his wife that he can't handle. He's asking if it would be wrong to ask his wife to move out. And, further complicating things, his wife is pregnant.

Read on to get the details of this wild story!

Chrissy Teigen has one of the best Twitter accounts ever.

I am so stupid and so tired please stop expecting things from me
— chrissy teigen (@chrissy teigen)1558142619.0

One of our favorite celebs shared a wild Reddit thread, (AITA) Am I the A-Hole?

The subreddit features people telling stories and asking, Am I the bad guy in this situation or are they? Just as a note, no one asking a question in this thread actually thinks they're the bad guy. So there's that.

The thread feels like Larry David made it. Anyone else getting that vibe?

The decision about who's a jerk comes down the hive mentality. What does the group really think? They're like mini-tribunals on somewhat trivial human behavior.

Often times, the question is an easy one to answer.

Like this woman demanding that her MIL give her a quilt. No one is entitled to a handmade quilt. And, she embroiled her sister-in-law in the whole thing. It's just bad family politics, where one person is being selfish.

Or, this one where a dude hid his girlfriend's favorite dress.

Why man? Why? You can't control what other people wear, even if you're dating, even if they're meeting your parents. You should do better!

But sometimes, they're not in the wrong.

Like this one, where this person's roommates were having too much of a good time – if you know what I mean. All their activity was making it hard for the roommate to actually live their life. That's a bit disrespectful if you ask me.

It's easy to get lost in this labyrinth of moral questions.

Isn't the magic of the internet passing judgment on people you don't know without shame or recompense? You could actually spend upwards of six hours in this rabbit hole.

Recently, a man asked this glorious forum if he was being a jerk for requesting something of his pregnant wife.

Basically, he came into a weird situation with his wife and didn't know how to move forward. So he asked the internet. All sides sound bad in this particular story...

He and his wife are expecting a child.

He says that she's started acting crazy lately, and he doesn't know how to deal with it. So, he's taken to the internet for some help and peace of mind.

In his words, she's acting like a "nut job."

This woman is pregnant with his child. Maybe don't insult her on the internet, homie. Also, "nut job" is not a great way to refer to anyone, let alone your partner in life.

He says that she's getting irritated about small things.

So far, I'm on her side. She's carrying a baby, and he should just be patient through the process. Irritated by small things is par for the course.

She's accusing him of losing attraction. Super common during pregnancy. Just buck it up for a few months and be extra reassuring.

He lists off all the ways his wife is petty.

There is nothing pettier than a list of ways someone else is petty. Don't keep score, don't roll out a list, talk to your wife.

His main example is that she hates his cooking now.

He made sandwiches, she ate all of them, and then told him he tasted horrible. It's so mean, it's funny.

The balls on someone to eat the entire sandwich and then say to the person who made it, "Nah, it was awful it," is such a mood.

Apparently, she pulls this food stuff all the time.

I mean, then stop cooking for her? If she hates your cooking? Maybe just order in? It seems like an easy problem to deal with.

Then, he gets into the crux of the problem.

The reason we're here, the reason he's turned to the internet about his wife, the moment.

As the situation goes, he's at the gym and a pretty girl starts flirting with him.

The girl from the gym asks him out for drinks.

That should have been his first clue that something was up. He's some angry dude who makes bad sandwiches. No one is asking you out at the gym.

He, like the bad cook/gentleman that he is, says, "No, I'm married."

Good on you, man. He earns points by doing the bare minimum expected of a married man with a baby on the way.

When he gets home, all of a sudden, his wife's whole attitude is completely different.

She greets him with a huge hug and apologies. Now he's suspicious. What's going on?

She admits that her best friend convinced her to run a loyalty test on him while he was at the gym.

What the heck is a loyalty test? And, why is her best friend cosigning such ludicrous behavior? We need to know.

The girl at the gym is a friend of a friend they paid to flirt with him and see what he would do.

And he passed! But now, has she failed his test? That he didn't even know he was giving? Who's the jerk, now?

In a surprise to his wife, this guy was NOT cool with being catfished.

Who catfishes their husband? This is one of those lose-lose situations. Either he's going to cheat on you, or you just catfished your husband. Why would you want to live in either of those timelines?

So he's turned to Reddit: would he be a total jerk if he asked his wife to move out?

It's a controversial post with answers on all sides. And it also seems like there might be more tension here than just the catfishing and sandwiches. What would you do? Is asking her to move out too extreme?

So far, the internet thinks he's wrong to ask this of his wife. But, it still is a controversial question.

The post went viral, with all kinds of crazy responses, but now the polls are closed. The camps seem pretty set in their views on this kind of crazy situation.

One take is: yes, what she did is crazy, but she's pregnant and apologized.

A lot of people have taken the position that asking your pregnant wife to move out of your house is extreme. Yes, catfishing is bad, but take a breath. Maybe you could go to couple's counseling? Or cool off for a few weeks in different bedrooms?

Other people think that pregnancy isn't a blanket excuse to be insane and catfish your husband.

The counterpoint to forgiveness is that this kind of behavior is egregious and beyond the pale, even if she's pregnant. The resounding sentiment here seems to be that these people need to talk to each other and acknowledge how bad things have become.

This is the answer to 90% of the problems found on reddit, but especially here. It seems as though there's been an extreme communication breakdown.

We love when people post their insanity on the internet because it's so fun to read.

So, thanks to this wonderful thread. And don't worry, there are plenty more Am I The Jerk? stories floating around on the internet...