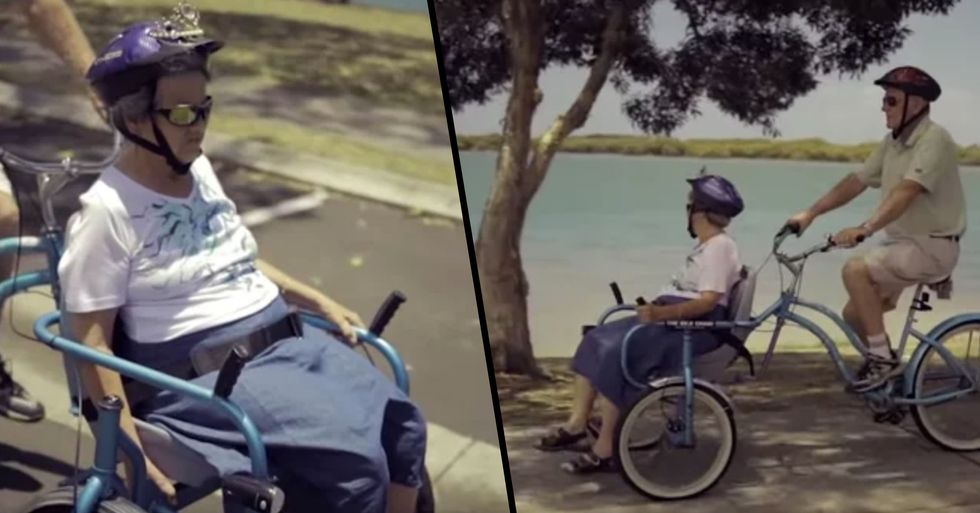 Alzheimer's is truly a terrible tragedy, and our hearts go out to anyone who has been affected by this life-altering disease.

Sadly, a cure is yet to be discovered and more and more people are perishing to the mental illness.

But one man decided to take action when his wife was diagnosed with Alzheimer's, and it is utterly heartwarming.

Alzheimer's disease is one of the most terrible things a person can be diagnosed with.

Alzheimer's is a physical disease of the brain that usually comes after a person has been suffering from dementia, which is a whole range of diseases that affect the brain.

It affects a lot more people than one would think...

According to the Alzheimer's Association, an estimated 5.8 million Americans are currently living with the disease.

And symptoms include forgetfulness, confusion, getting lost in familiar places, and personality changes.

The stages of Alzheimer's progress steadily...

And the final stages are truly the worst when a person doesn't even know who they are anymore. They completely forget who their family members and friends are, and in extreme cases, a person can forget basic skills such as brushing their teeth, using the toilet, and even speaking.

It is a truly heartbreaking process...

And it is even harder for those close to the person suffering.

Many children and spouses end up becoming full-time carers for their loved ones...

And for someone to gradually watch their relative decline is one of the worst things that could ever be granted upon a person.

But as anybody would...

People will do anything for the ones they love.

Bill Forward has been married to his wife, Glad, for fifty-five-years...

But back in 2004, Glad was diagnosed with Alzheimer's.

The couple have built their own little family...

And the Forward family found the diagnosis particularly hard, especially since Glad used to love spending time being active in the outdoors.

Both her physical and mental health began to deteriorate...

The Sunshine Coast Daily reported that her mobility got so bad to the extent that she could no longer walk on her own anymore, without continuously falling over.

Bill decided to make a video to explain the extent of their daily struggles...

And his dedication to his wife is heartwarming. He said, "I don’t count it a burden whatsoever, I count it a great privilege to care for this one I have loved all these years. She’s my princess and I’m her William and I wouldn’t have it any other way."

But out of these difficulties, the invention of a bicycle for 2 was born...

He missed having days out with his wife, so Bill set about designing a bike chair in which Glad would sit in front, with him pedaling along behind.

The bicycle changed their life...

That way she could sit while pointing things out, and they would be looking at the same thing. In any case, he then took the design to his friend, Ken McKenzie, who was able to make it a reality.

It is unknown how quickly Glad's condition will deteriorate...

But it seems that thanks to Bill, she will be able to live the rest of her life to the full.

Keep scrolling to learn about the mom with Alzheimer's who forgets about her son until he sings to her...