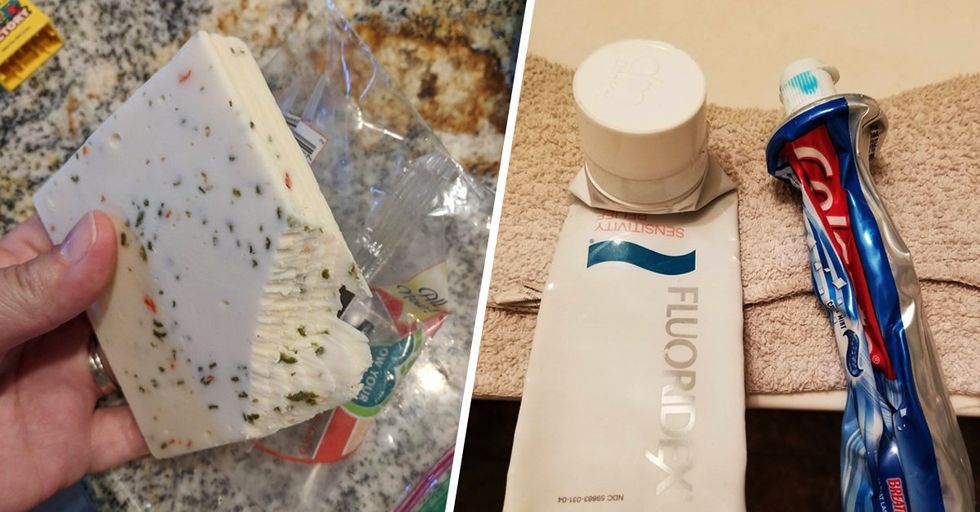 Husband Fails That Will Make You Say 'Bless His Heart'

There's nothing better than being married to your best friend. My husband and I have been married for a little over a year now, and it has easily been the best year of my life so far. It's so comforting to know that no matter how many days in a row I spend in my pajamas with my hair up in a messy bun, I'll still have  someone who will want to hang out with me...and who will gently encourage me to take a shower and put some real person clothes on.

That being said, there are times when husbands do things that defy logic or explanation. My own husband, for instance — love the man to death, but he cannot for the life of him remember to fold hand towels into thirds before hanging them on the towel rack. (Granted, maybe I'm the weird one for wanting our hand towels folded into thirds.)

Here are some more husband fails that I think a lot of you will be able to relate to.

This husband decided to shred some cheese.

Only the "block" of cheese he decided to shred was actually a bunch of cheese slices meant for sandwiches. You can still put a slice of cheese on your sandwich, but it's missing a corner.

This husband is asking for trouble:

My husband has been sticking these in places I can't reach to annoy me. It's working. from mildlyinfuriating

OK, this is pretty funny. Until your wife needs the lint roller and you end up with the role of "lint roller retriever" for the rest of the day.

My husband wanted a bagel, apparently from mildlyinfuriating

This guy didn't just want a bagel. He needed a bage– immediately.

Step one: preheat the oven.

My husband put a plastic cutting board in the oven and I turned it on to preheat. from mildlyinfuriating

On the bright side, your oven is preheated. Unfortunately, you can never use it again without being accompanied by the smell of scorched plastic.

How my husband puts back cereal from mildlyinfuriating

Anyone who does this better prepare themselves for retribution. It will be swift and painful.

If only boxes were easier to open.

My husband is 30 years old and he still doesn't know how to open a box. from mildlyinfuriating

They should really consider putting flaps or something on boxes like this. It'd make life so much easier.

There's only one solution here. You have to make him drink all of the open jugs of milk. Please film it for science.

My husband always forgets to put a new roll of toilet paper on. Today he didn’t forget from funny

Hey, one step at a time, ya know? Maybe after this, he'll graduate to putting the toilet seat down.

If this ever happened at our house, I would immediately call a family meeting. This is simply unacceptable.

Never underestimate the talents of someone who really, really doesn't want to take an extra 15 seconds to put something in the recycling bin. They are dedicated to their cause.

An eggception to the rule.

Husband takes eggs from carton at random. This isn’t ‘nam, there are rules... from mildlyinfuriating

Usually, I'd agree with the wife in this situation. Take things out in order. In this case, however, I think he might be trying to keep the carton balanced so it doesn't flop out of your hand when you take it out of the fridge. I'm willing to give him the benefit of the doubt.

Squeeze from the bottom!

I have two pieces of advice I give to every couple I know. First, get a king size comforter for your queen size bed. Second, have separate tubes of toothpaste. Both will save you lots of grief.

How my husband opens the orange juice from mildlyinfuriating

Why open something the easy way when you can mangle the container instead?

This is a cursed image.

The way my husband eats a Hershey bar from mildlyinfuriating

OK, this one is really getting to me. You might want to see an exorcist or something.

The painter we deserve.

You know what? Props to the guy for going along to the wine and paint night. It's not like they need two bad versions of the same painting.

The blanket that my husband got me for Christmas. It’s his face from funny

The holidays are right around the corner! In case my husband ever reads this article, please do not do this to me. I beg of you!

Behind every woman wandering aimlessly around a Michael's, there's a man rearranging the wood letters into desperate cries for help. It's universal.

Not exactly what I meant.

Although you've got to admit, the kid looks comfy! I give him three out of five stars.

This poor pot pie has clearly been through a lot. I imagine the wife's face had a similar disappointed look upon seeing her husband's handiwork.

I will never judge anyone for their inability to fold a fitted sheet. It is impossible to do. No one in the history of time has ever been able to fold one, actually.

My husband tried cutting his hair by himself from funny

Hey, he tried! At least he didn't try to cut your hair!

This one breeds grounds for divorce in 12 different U.S. states. This guy better sleep with one eye open.

It's not like the baby can read. As long as the gift is good, I think you're in the clear.

We have an ant problem. The husband is trying to make the ant traps more appealing. from funny

If you've ever dealt with an ant infestation, you know how important it is to keep spirits high. You might have to make tiny signs for your ant traps in order to keep going

At least he left a note!

And that's why I'm still wearing my pajamas and will probably never wear any other clothes from the closet ever, ever again.

Not a very happy birthday.

The way my husband cuts this cake... from mildlyinfuriating

This was clearly done with malicious intent, so I'm not going to let it get to me. Agh! I can't ignore it!

You married a monster.

The way my 39 year old husband eats sandwiches. from mildlyinfuriating

Plenty of picky eaters ask for the crusts to be removed. Not many seek the crusts out specifically.

This made my eye twitch.

The way my husband hangs up our son’s shirt. from mildlyinfuriating

On the one hand, the shirt is hung up. On the other hand, this is clearly a disaster.

What are the chances that he did this to annoy you? Pretty high. Looks like it worked!

That is some VERY secure bread.

Husband, why do you do this to me? Bread bag does not need to be THIS secured. from mildlyinfuriating

Everyone knows the twist and tuck method is superior to all other methods of bread bag closure. What is he trying to protect the bread against?! Be sure to share this with your husband!