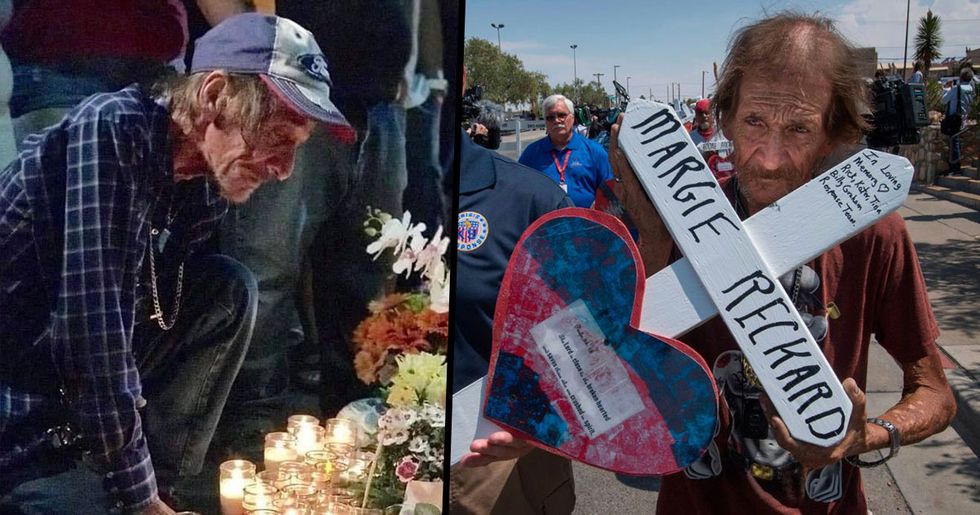 Husband of El Paso Victim Has No Family, Invites Community to Wife's Funeral

On the morning of the 3rd of August 2019, hundreds of people flocked to a Walmart to shop. It was a Saturday, and, because millions of Americans work during the week, Saturday is the best day to go grocery shopping.

Tragically, for those shopping in this particular east-side El Paso Walmart, this Saturday trip would cost them their lives.

Margie Kay Reckard was one of the twenty-two civilians murdered in broad daylight by a lone gunman; twenty-four other shoppers were injured when the twenty-one-year-old gunman opened fire.

The mass-murderer was subsequently arrested and has been charged with capital murder.

For those left behind, though, this comes as little comfort as the families and loved ones of the El Paso shooting victims have been left to bury their dead.

Margie Kay Reckard only left behind one person, her husband, Antonio Basco.

Margie and Antonio were each other's world. Now that she has gone, he is completely alone.

'Til death do us part.

Margie and Antonio married in 1997. This year, they celebrated twenty-two years of marriage.

"When I met her, she was an angel and she still is."

Talking about his late wife to KFOX14, Antonio explained that he misses his wife dearly and that she will always be his angel.

"I was supposed to be the strong one, but I found out I’m the weak one and she’s going to be missed a lot."

Losing his wife has left Antonio with an unimaginable amount of heartache. His life was Margie and, now that she has gone, everything has changed.

The mass shooter was a domestic terrorist and the shootings were a hate crime.

Shortly before opening fire in the Walmart, the terrorist posted a white nationalist and anti-immigrant manifesto on message board website, 8chan.

Margie Reckard was a loving wife. She was not a threat to anyone.

Antonio talked about how loving and compassionate his late-wife was. She was smart, too: "I mean you didn’t even have to be there to talk to her, you could just look at how she was, how she acted, how she presented herself she was an awesome lady," he said. “You see Margie, more or less was the brains of the family."

After the El Paso shooting, there were calls to make stricter gun laws.

But those on the side of keeping things as they are were quick to assess the shooter's motives. The age-old conversation about mass shootings being a consequence of "mental illness, racism, sexism, video games," can't keep going around and around. As Vox puts it: "All of those things exist in countries across the world, many with much less gun violence. What is unique about the U.S. is that it makes it so easy for people with any motive or problem to obtain a gun."

The young shooter's racism must have come from somewhere.

The gunman was clearly "anti-immigrant" - as he made clear when he posted his white supremacist and anti-immigrant manifesto online just before the shooting. The left is calling for the witchhunt against immigrants to end and is suggesting that President Trump's casual racism and anti-immigrant rhetoric is the source of the growing number of hate crimes being carried out across the country.

Less than a month before the shooting, Trump was stirring up hate on Twitter.

The president has a long track record of racism. The president's father, Fred Trump, even famously refused to rent property to African-Americans and would lie when they asked whether he had rooms available. I guess the apple doesn't fall far from the tree... Despite Trump claiming to be "the least racist person in America," less than a month before the El Paso shooting, he told four new democratic members of Congress to “go back" to the “corrupt" countries he said they are from.

Not only were Trump's comments offensive, but they were also (of course) inaccurate.

Of the four Democrats that he was referring to, only Rep. Ilhan Omar was not born in the U.S. Omar was born in Somalia and moved to the U.S. when she was six years old. Not that it even matters. The racist rhetoric used by Trump to alienate the public from his opponents was dangerous.

Trump has been stirring racial hate in the U.S. even before he was elected.

At a rally in North Carolina, on the week that Trump tweeted against the women in congress (who are known as The Squad), a crowd chanted "send her back." It's this kind of "us and them" mentality that Trump breeds in his supporters that leads to the kind of horrendous atrocities that takes innocent lives like Margie's.

"There are so many different issues that are weaving themselves into a braid of violence into our country. One of them is white supremacist terrorism."

The voice of, in my opinion, reason in modern politics, and my personal hope for a brighter future in the United States, Alexandria Ocasio-Cortez, spoke out after the El Paso shooting. AOC condemned Trump's racist rhetoric that has created such a hostile environment within the U.S. and stated that the president “is directly responsible for what happened in El Paso."

AOC went to El Paso in July, before the shootings, to visit border facilities.

Along with a group of democrats, Ocasio-Cortez, visited El Paso to see for herself the conditions in two border facilities in Clint and El Paso, Texas. The group wanted to raise awareness of the poor conditions in the facilities by sharing what they witnessed on Twitter.

AOC had her phone confiscated by officers and received abuse from those supposed to be in charge.

According to Vox: "On a private Facebook group for current and former Border Patrol agents where they shared derogatory comments about migrants and female lawmakers, including those on the tour. One post suggested a GoFundMe should be made to compensate whoever would hurl a burrito at Rep. Alexandria Ocasio-Cortez (D-NY) and Rep. Veronica Escobar (D-TX) during their visit to the Clint border facility. Members also made sexist comments about Ocasio-Cortez, sharing photoshopped images of her in sexually explicit situations."

Fortunately, congressman, Joaquin Castrot, managed to keep hold of his phone and he recorded the horrific conditions.

This moment captures what it’s like for women in CBP custody to share a cramped cell—some held for 50 days—for them… https://t.co/NMWx0BdIw8
— Joaquin Castro (@Joaquin Castro)1562025413.0

The visit to the El Paso facility proved that the system is oversaturated and that the conditions are inhumane. Castro stated that "the system is broken" - and expressed that it would remain that way if the dire conditions were kept a secret.

AOC exposed what was happening at the El Paso border facility in a series of tweets.

She tweeted that she was alarmed by the lack of accountability for what was happening. When she was at the facility, she witnessed a number of inhumane situations with no one accepting the charge for the conditions. She tweeted: "Now I’ve seen the inside of these facilities. It’s not just the kids. It’s everyone. People drinking out of toilets, officers laughing in front of members Congress. I brought it up to their superiors. They said 'officers are under stress & act out sometimes.' No accountability."

Rep. Veronica Escobar is calling for transparency and accountability.

The Congress representative for Texas spoke out following the tour and made calls for more transparency about the conditions in the border facilities. She stated that more funds were necessary if the government were to keep throwing people in the facilities.

Trump did not visit the border control facilities in El Paso. He only visited after the mass shooting.

And his visit, following the mass shooting, was not a welcomed one by many. Escobar, whose hometown is El Paso, spoke out after the shooting and said: "Words have consequences," she said. "And the president has made my community and my people the enemy. He has told the country that we are people to be feared, people to be hated."

The language used in the gunman's manifesto reflects ideas from President Trump, Fox News, and the modern republican party.

In the four-page document, which was titled "The Inconvenient Truth," the twenty-one-year-old shooter made reference to "democrats using open borders to attract voters," fears of a "Hispanic invasion," and suggested that high levels of Hispanics would turn Texas into a "democratic stronghold."

These ideas are absurd.

But these are ideas that are shouted on Fox News daily and are repeatedly thrown around by our president. Scaremongering people into voting republican doesn't only cause rupturing within neighborhoods, with people disliking their neighbors and fearing the world outside of their home, it can also cause people to reach for a gun.

Margie Reckard was just out to do some grocery shopping.

"We were gonna live together and die together that was our plan."

Speaking about his late-wife, Antonio explained that the shooting had changed everything. Margie was dead at sixty-three years-old and Antonio is going to spend the rest of his life in mourning.

He can still remember the day that he met Margie.

The day that he met Margie was the day he felt true love. Besco recalls, "I just feel it and when we first met, that feeling came to each one of us, to each other, and we’ve been together ever since."

Basco didn't know who to invite to Margie's funeral.

It had only ever just been the two of them, they were completely devoted to each other and never had children.

But the people of El Paso fought up against the hate and have since grown stronger - they have a renewed sense of community spirit.

Antonio has invited the entire community to his late wife's funeral.

A statement released through Perches Funeral Home claimed: "Basco says he has no other family. With Reckard’s funeral services Friday, Basco is inviting the public to help celebrate the life of his late wife." I hope there's a good turnout. I'm sure there will be. Want more information about the shooting and Trump's response to it? Keep reading.