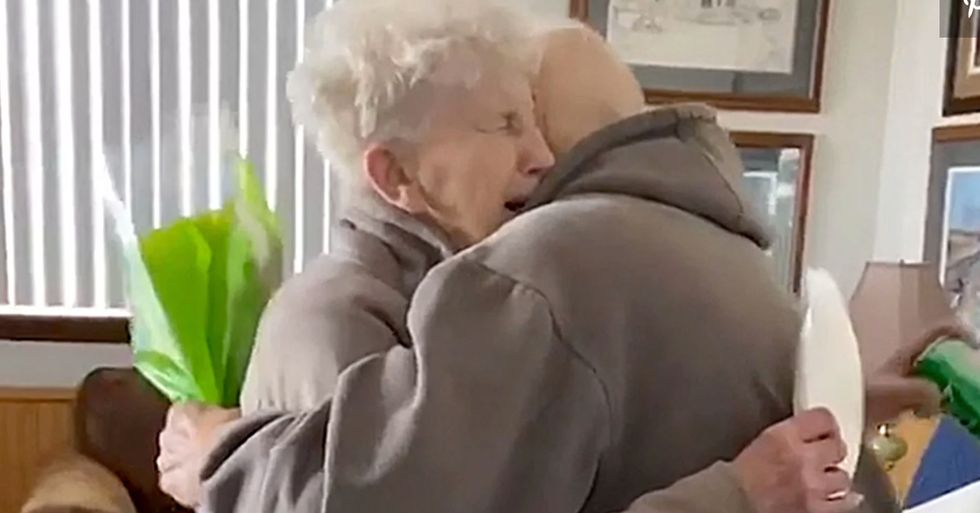 After being released from the hospital on his wife's birthday, one devoted husband decided to surprise her in the best way.

Keep scrolling for the full story, and to see their heartwarming reunion...

Millions of people all over the world are currently in lockdown.

It's an incredibly isolating experience for many people...

Spending weeks and weeks alone is enough to send anyone into a dark place.

And, making things even worse...

The elderly, and those who are considered as "vulnerable", must self-isolate at all costs, meaning they cannot come into contact with others for their own safety.

Most couples have been toughing it out and abiding by these harsh rules...

And have simply been looking forward to being reunited with their partners once again.

But others have been breaking the rules.

We all remember the story of the New Yorker who snuck into a hospital to visit his wife.  Yeah, not the smartest move in the world.

And don't seem to understand that good things will come to those who wait.

And there's one story that is the perfectexample of this philosophy.

After being separated as a result of the medical pandemic, one elderly couple were reunited in the most amazing way.

Beverley Lindell only wanted one thing for her 84th birthday...

And that was to see her husband of sixty-three-years, Jerry.

But, sadly, Jerry had been quarantined at the local Meeker Manor nursing home in Litchfield

The Minnesota couple had been separated in order to lower the risk of either of them contracting the virus, after Jerry had a stint in hospital.

Understandably, this took a huge toll on the pair...

Who were used to doing everything together. It was especially difficult because the separation was the longest they had been apart since meeting at age eighteen and marrying 2 years later, according to KARE.

But, suddenly, Jerry was discharged...

Just in time for Beverly's birthday. The couple’s daughter helped arrange the surprise, driving her dad to Beverley’s house before presenting her mother with some birthday cupcakes.

And, upon seeing her husband, Beverly instantly burst into tears.

“I can’t hug you!" she told him after shrieking at the surprise. But Jerry reassured her that all was fine, saying in the clip, “Why can’t you? I can hug you!" And, as seen in the only photo taken of the reunion, they fall into a tight embrace.

The couple are now happily self-isolating together.

What an amazing story in an otherwise dark and turbulent time. For more on uplifting stories, keep scrolling to read about the current recovery rate of people infected with the virus...