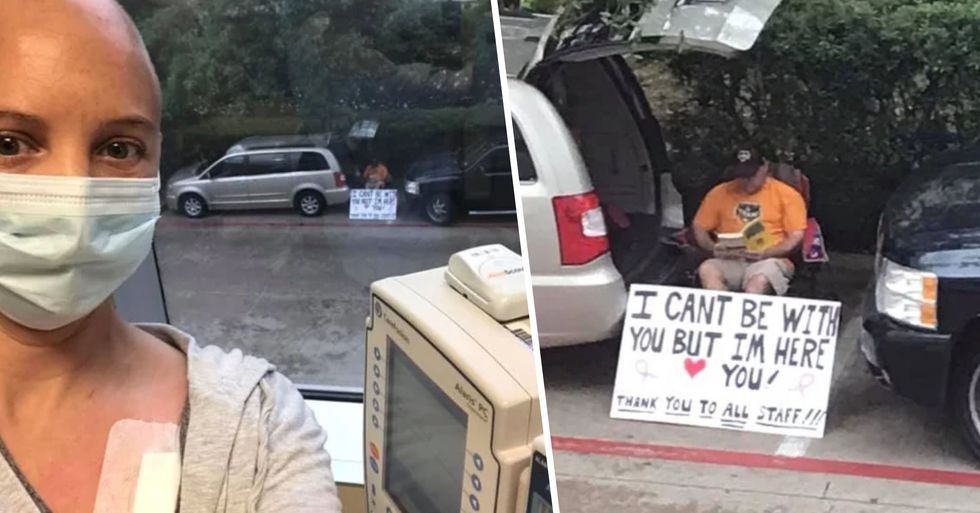 As anyone who is currently in a lockdown can relate, being away from family and friends is hard - especially when their loved ones are unwell.

One man has found that he can't be with his wife during her chemotherapy treatment due to the lockdown restrictions, but he came up with the best way of supporting her...

Millions of people all over the world are currently in lockdown.

The deadly virus has been spreading at an alarming rate...

And now, nearly over 1 million people globally have been infected with the virus.

Lockdowns have been implemented in numerous parts of the world...

Including in parts of China, Italy, Spain, the United Kingdom, and many parts of the United States.

Self-isolation has been deemed as the most effective way of combating the virus.

Meaning that millions are not able to visit their close family members during these difficult times, which is proving unbearable for many.

And what makes things even worse...

People who are elderly and those who are considered "vulnerable" must self-isolate at all costs and they cannot come into contact with others for their own safety.

This is now a reality for Albert Conner and his family...

Albert's wife, Kelly, has been battling breast cancer since January of this year.

Of course, the pandemic began in January...

So Kelly's life is now on the line more than ever.

Even though Kelly is able to still live at home with her husband and children...

She isn't allowed any visitors when she is in the hospital receiving her treatment - which can take a couple of days at a time.

But thankfully for Albert...

Kelly now has a way of receiving visitors during her treatment.

On the 30th of March, Kelly went in for her treatment...

And of course, visitors were not allowed inside the hospital. Speaking to Good Morning America, Albert said, "I didn’t feel right not being a part of it because I had promised her that I would be there every step of the way and I felt like I would be breaking my word."

Albert decided to get creative.

With the help of their children, Albert took out a poster board and began coloring it with a sweet message. He then drove to the hospital and text Kelly to let her know he was parked outside.

Of course, Kelly was in for a lovely surprise when she looked out of the window.

"As soon as he texted me, I just kind of lifted up in my chair a little bit to peer out the window and he was just right there," Kelly said, recalling the surprising moment.

Albert's sign read, "I can’t be with you but I’m here," along with a thank you message for the hospital staff.

"It immediately brought tears to my eyes and I felt a love for him right then at that moment, that he would do that for me," Kelly said. "I think I kind of gasped and the nurse turned around and said, ‘What’s wrong?’ And then she saw I was looking out the window and she looked out and started to tear up too."

Albert said that a few nurses even came out and thanked him for the kind message.

"A few of them said I was the reason that they come to work," he recalled, "The attention made me uncomfortable but it made me feel good and was very touching." "When you just reflect on everything and think about all the nurses and doctors and other patients, it makes perfect sense. You really can’t argue it. You just have to support it any way you can."

Kelly is hoping to have finished her chemotherapy treatment by May.

We wish her the best of luck in her road to recovery and it is reassuring to know she has such a strong support system around her. Keep scrolling to learn about the man who used his drone to get a girl's number during lockdown...