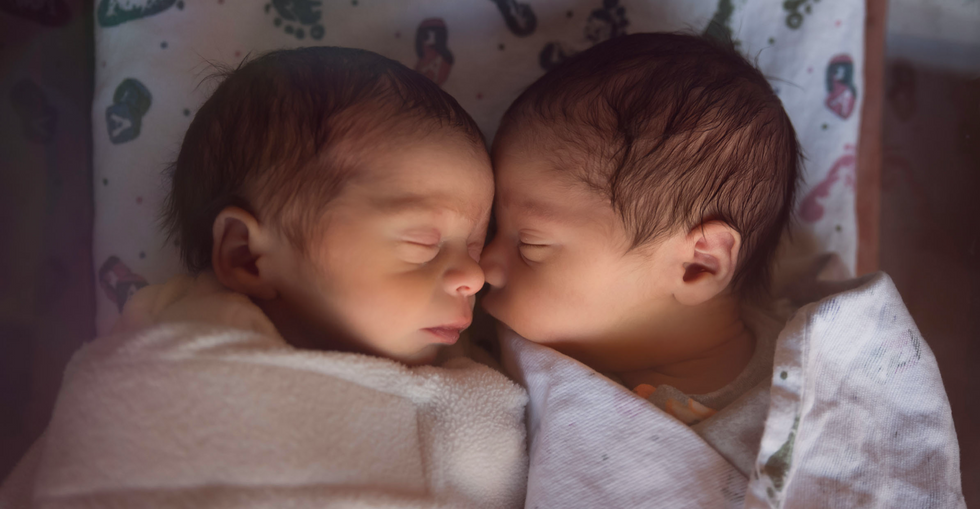 We've heard a lot of strange things before, but this one might be up there as one of the strangest.

As a woman has given birth to twins, but the twins don't have the same father.

Yup, we can't understand it either.

Keep scrolling to find out how this is even possible...

We live in a world of weird and wonderful things.

Some more than others.

Most of it all thanks to mother nature.

It blesses us with some of the most wonderful things.

Including the births of thousands of babies every year.

After waiting nine months they finally get their own bundle of joy.

There are a few times when you having a baby that something unexpected might happen though...

Some women are lucky enough to have twins.

But despite being lucky, nothing could prepare you for the surprise of that.

What would be even more of a surprise than twins though?

Or how about, finding out that your newborn twins don't have the same dad.

That's got to be up there with pretty big surprises.

So much of a surprise that it almost doesn't sound possible.

But believe us, it definitely is possible.

As one woman in China discovered.

She gave birth to twins.

Who don't have the same fathers. And she only found out on by doing a compulsory paternity test.

We know, it took us a while to understand it too.

In the vast majority of cases, it takes one sperm to fertilize an egg, which for identical twins then splits and forms two embryos.

So how is it possible to have twins with different fathers?

Well, speaking to China News Weekly Deng Yajun, director of Beijing Zhongzheng Forensic Identification Centre and the practitioner who did the test said that the chance of this happening are slim. In fact, they are one in 10 million.

They explained: "First, the mother needs to produce two eggs instead of one in the same month [to have twins].

"Second, she needs to have intercourse with two men in really short space of time to make it possible".

As a result, whilst the babies might be twins, they aren't identical.

In fact, biologically, they would have the same genetic relationship as those who are half brothers.

So, you might be wondering how this came about?

Especially since this suggests that this mom might have been cheating on her husband.

Well, in China a paternity test is standard procedure when registering the birth of a child.

So whilst this couple went for a routine procedure.

The husband got a big shock at the results.

As he found out only one child was his.

Despite this being incredibly rare, it did also happen just last year to another couple in the city of Xiamen when they went to register the births.

The father had never questioned the possibility of not being the biological father, but he had wondered why the twins did not look alike. And then he found out he was the father only to one of the babies.

Well, that's certainly a hard story to explain to them in years to come..

Keep scrolling to read about a woman who unknowingly gave birth to another family's twins...