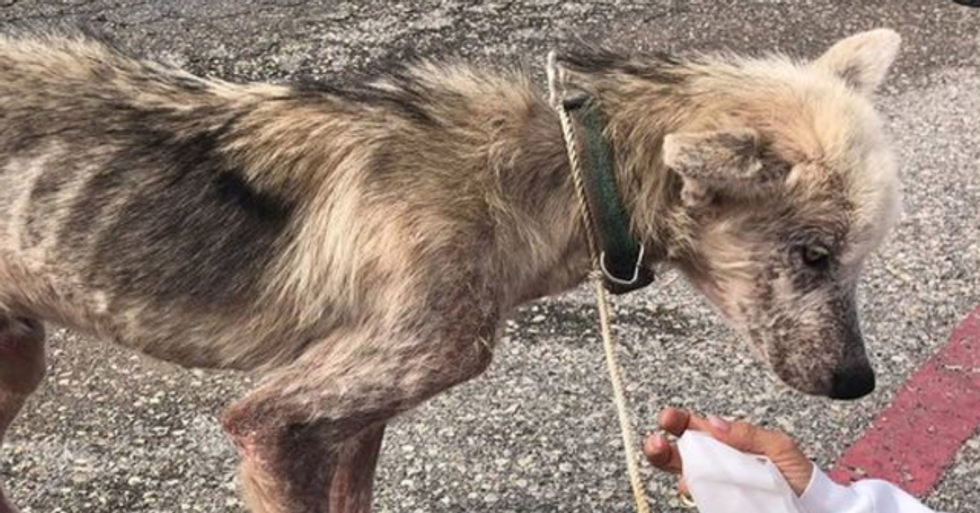 After been starved and neglected for 2 years, a husky has shocked the world by making an incredible recovery and transformation...

Animal cruelty is by far one of the most sickening things in this world.

Though most of us treat our animal companions with nothing but love and respect, there are sadly many people out there who abuse and abandon these beautiful and innocent creatures.

These people are utterly disgraceful...

And they shouldn't be allowed to own pets. Period.

But sadly, many still do.

And, as a result, so many innocent animals end up being abused and, in some worst-case scenarios, killed at the hands of their cruel owners.

But amongst all these heartbreaking stories...

There are, thankfully, the incredible stories of recovery.

This week, a husky's remarkable road to recovery has gone viral.

The Oklahoma-based animal rescue charity, Pet Angels Rescue, shared the story of Finn, a starved husky who has made the most incredible transformation.

Upon being found, Finn was "nothing more than a bag of bones."

For two whole years, the poor dog had been tied up on a leash without proper food, water, or shelter.

It was the most horrifying sight.

Speaking about his condition when he arrived, one of the rescuers said: "As soon as we pulled up, we just kind of looked at each other, we just lost it. He was a bag of bones, he had barely any fur on him. It was absolute pure neglect."

And the reason behind Finn's treatment left his rescuers nothing short of sickening...

The dog was starved and neglected out of revenge.

His owner had bought him as a puppy as a gift for his wife...

But, when she left him and filed for divorce, the twisted man decided to inflict years of suffering on the puppy as a way to get revenge.

His owner, who has remained unidentified, started restricting Finn's food and water...

Before quitting feeding him altogether and leaving him for dead.

But, thankfully, Pet Angels Rescue was here to help.

Upon finding Finn, his rescuers carried him into the car where he slept soundly throughout the 2-hour journey back to the shelter.

And, at the shelter, Finn's recovery began.

The dog had a lot of health issues to address - he was severely emaciated and suffering from parasites and mange.

But they were surprised by his resilience.

They noticed that, upon arriving at the shelter, Finn was rearing to go and walked on the leash, which was surprising for a dog who had barely moved in 2 years.

Finn's health, both physically and mentally, began to drastically improve.

And his rescuers found that he "is instantly forgiving."

And, gradually, his fur, which once lay in tatters and clumps, began to grow back.

Now a healthy, eighty-pound husky, you'd find it hard to believe that this is even the same dog.

And, to give this story an even happier ending...

"His adopters actually came to see him very early on in his recovery. They've been incredible, they've given him the best life."

Finn finally has the happy forever home he deserves.

Finally, it seems that we are taking a stand against animal cruelty once and for all. Keep scrolling to read about the new bill introduced by President Trump that makes any form of cruelty against animals a federal felony...