I Unabashedly Love 'Diners, Drive-ins, and Dives' and You Should Too | 22 Words 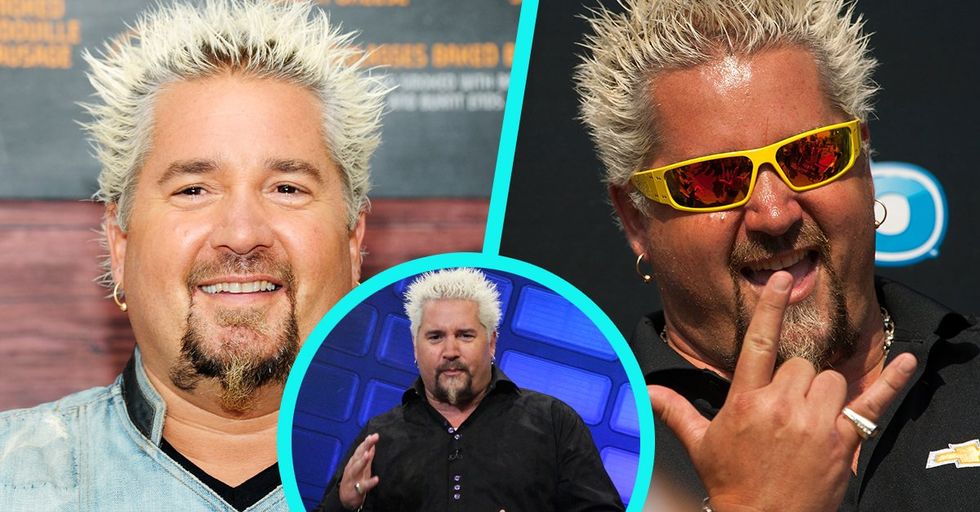 I Unabashedly Love 'Diners, Drive-ins, and Dives' and You Should Too

With the one-and-only Guy Fieri at the wheel (literally, of his red Camaro, and figuratively), the show is now in its 28th season.

A television show doesn't last that long unless there's something about it. And as an avid fan of Triple D, I know exactly what that something is.

Diners, Drive-Ins, and Dives is about so much more than good food. It's about good people.

First, there is no Triple D without Guy Fieri.

And yeah, you better roll that "r" in his last name. Watching the show is a serene experience, entirely sublime, and no, I'm not referring to the band that's probably in Fieri's "top five of all time." Guy Fieri is the backbone of Diners, Drive-Ins, and Dives and anyone who tells you differently is full of crap. Sure, the bleach-blonde spikes and bowling shirts are definitely a lewk.
But the essence of Guy Fieri is a far cry from his loud, stuck-in-the-early-'00s vibe. If anything, the fact that Fieri is still rocking the goatee/Oakleys combination in 2018 just proves that he's not afraid to be himself. And that's why Triple D thrives — because the show is a pure expression of one guy's (Guy's) unironic, undying love of food and the people who make it.
As much as Fieri is a polished TV host at this point, if you watch enough Triple D, which I definitely have, you get to know him on a much more intimate level than he probably intended. It's bound to happen when there are hundreds of episodes to watch...and you actually watch them all. In that sense, the show has become so much more than a cool show about fun restaurants. It's a character study, a deep dive into the psyche of a man who was once an up-and-coming restauranteur but is now the Mayor of Flavortown.
You can watch Diners, Drive-Ins, and Dives on its surface-level, or you can see it as the nuanced and celebratory learning experience that Fieri himself does. After watching episode after episode of the show, I can tell you that despite the aura he gives off, Guy Fieri is/was/wants to continue to be considered a serious chef. He knows spices by the smell alone and can spot a mirepoix a mile away. As much as he's showcasing these chefs and their techniques during the episodes, Fieri is also constantly learning from them, and yeah, showing off his culinary knowledge now and then.
You also get to know the man on a baser level. I can tell you with certainty that Guy Fieri does not like eggs, especially runny ones. He'll push 'em to the side whenever possible or even ask for the dish without them. He doesn't hide when he's tentative about trying a dish, and likewise, he's honest, in his own subtle ways, about his reaction once he's sampled it. My real-life superpower is that I can instantly tell whether or not Guy Fieri is enjoying the food he just put in his mouth. And that's because...

In its decade-long run, Diners, Drive-Ins, and Dives has cultivated its very own language.

On Triple D, every restaurant is a "joint." All good things on the show are"scratch-made." When Guy Fieri likes a dish — really likes it — it's "money" or "legit" or "righteous" or "killer" or "lights-out" or "out-of-bounds" or "real-deal" or, if things are really explosive, "dynamite" or the "bomb." He can eat something he loves "all day. All day, man." When he doesn't like something, he just sort of names the ingredients in it: "Oh yeah, you can really taste the peppers, and I'm getting some of those olives too. The garlic's really coming through..."
When a sauce is particularly tasty, Guy suggests it would still retain its deliciousness if you "put it on a flip-flop." Fieri is full of dad jokes that he repeats ad nauseam, but it's never not dad-charming. Playing with the pronunciation of Worcestershire sauce is one. "Winner winner [specific name of yummy dish he's eating] dinner" is another.
Then, there's the "hunch." Unlike any other food show out there, Guy Fieri and Triple D have gifted us a signature sandwich-eating position, optimized for getting the perfect bite of an overflowing burger or hoagie while protecting yourself from flying meat juices and rogue ingredients. And we are eternally grateful for this feat of physics.
And then there's Flavortown. Let's explore the concept of Flavortown. Flavortown is so much more than a slang destination for tasty food as invented by Guy Fieri. It's an idea. A mindset. As Fieri has expressed, there are many ways to get to Flavortown; whether you're pulling up to the station or taking an express train or landing there in your hot-air balloon, Flavortown is a real place.
Flavortown is a world within a world. It's not unlike the neighborhood of Make-Believe in Mister Rogers' Neighborhood, only there are no puppets and Guy Fieri doesn't wear cable-knit sweaters. On the subject of Flavortown, here's what the Mayor himself had to say:

"On camera, I once said, 'This pizza looks like a manhole cover in Flavortown.' Willy Wonka had a chocolate stream, you know? So it's taking these iconic food items, these iconic food moments, and giving them a home. They all live in Flavortown. It's like one of those things in The Matrix: You can only get down with Flavortown if you believe in Flavortown. I have people walk up to me and say, 'Hey, I'm a citizen of Flavortown.' I have people that want to pledge to be a city council member of Flavortown or the mechanic. It doesn't stop. What would be the airline of Flavortown? Sausage Airlines? It just doesn't stop. I just said it, and then people heard it. Of course, there's no Flavortown—unless you believe in it."

Diners, Drive-Ins, and Dives wouldn't be the show it is without the "joints" themselves.

The show features all manners of the three D's in its title, and it's that sort of variety that keeps us coming back for more. One of the greatest feelings about living in a neighborhood is having a joint, if you will, that you frequent repeatedly because it's consistently enjoyable and you feel comfortable there.
Those are the requirements for any Triple D joint. And while this is seemingly simple criteria, not every restaurant fits the bill. So that's what makes the places featured on the show extra special. Whether they're serving up omelets, BBQ, tapas, or Asian noodle soups, Triple D joints are helmed by passionate people and frequented by the same.
Chefs and owners of Triple D joints are always evidently passionate about their restaurant, but that doesn't mean that some of them aren't super awkward. Like I said before, this show has layers, and as much as Triple D is about highlighting cool dishes from "funky little joints" all over the country, it's also about highlighting the people behind the curtain, no matter how weird they are.
And oh boy, it is entertaining when Guy Fieri just cannot seem to connect with the chef who's showing him around. He's very adept at handling all sorts of personalities, but you can definitely tell when he's excited about someone and can develop a rapport with them and when he's just kind of going through the motions. Similarly, you can totally tell when he's impressed with the chef and his/her techniques or if he's just kind of weirded out by what they seem to be doing. Sometimes the look on his face is "I guess no one told his sushi place in Alabama that raw fish doesn't go great with baked beans." (I don't think that's really an episode, but you get the general idea.)
But Guy Fieri gives everybody a fair shake, and that's really the spirit of Triple D. It isn't about the chefs with the most classic, upscale dishes. It's about the down-home dishes that make people in the neighborhood happy. Whether it's a farm-to-table small plate joint, a combination sushi/BBQ joint, a giant beer hall with deep-fried snacks, or a food truck on the beach, Guy Fieri allows everyone to shine, and isn't that what America should be all about?

You get to see some incredibly cool dishes being made on the show, and even though it's not a cooking show in the traditional sense, if you watch it enough, which you can because it's on literally all the time, you can definitely learn some stuff.
For example, I'm pretty sure I could make a basic rub for BBQ ribs solely from watching Triple D. I know what's involved in pizza dough now. Aiolis? No biggies. Diners, Drive-Ins, and Dives has something for everyone, including the aspiring cook.
But the most important food lesson I've learned from Triple D is that experimentation in the kitchen is OK. More than OK, it should be encouraged.
Guy Fieri was super skeptical of the guy who boiled his ribs before sticking them in the oven, but it totally worked! On Triple D, no one is dismissed or not considered serious when they don't follow the "rules." And that's one of the most beautiful tenets of Flavortown.
Diners, Drive-Ins, and Dives, as one of the longest-running shows on the Food Network, has become a staple in a lot of American homes. Guy Fieri isn't just a TV host. He's a representative of all of us, an enthusiastic patron and provider of a sense of community and love through food. He's the conductor on the train to the Flavortown within each of our hearts, and for that, I am forever grateful.