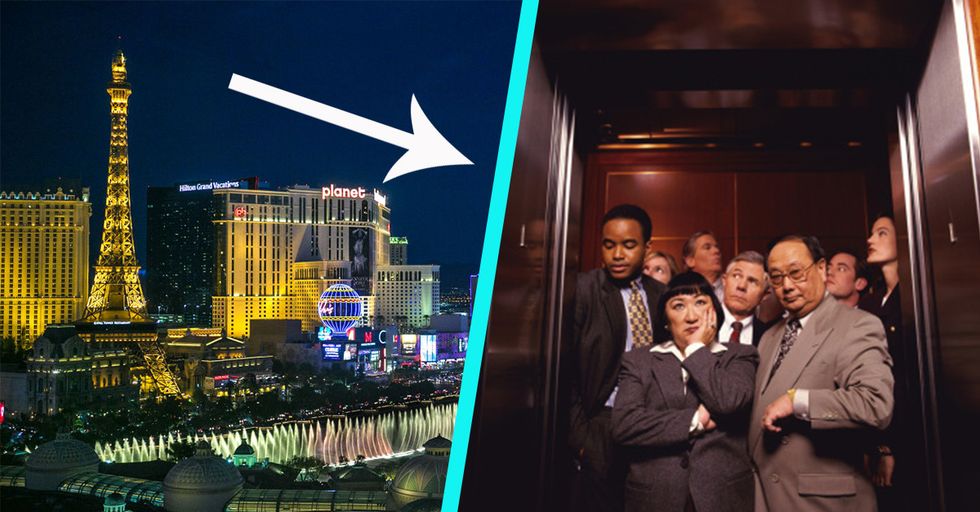 Daily interaction with technology is inevitable in this world.  Sure, Siri still seems to barely understand what you’re asking of it, and driverless cars feel like they’ll always be “five years in the future.”  Don’t even get me started on whatever the heck VR is.

That said, there are machines in life we expect to work, all of the time, every time.  The washing machine will finish its cycle, your car is supposed to start (and stop) when you tell it to, and the ceiling fan won’t come spinning off its base, sending wooden blades flying around the room at 100mph.  These are the machines that have been around since the steam age, the turn of the century.  They’ve been proven for over 100 years.  Sure, some people way back when may have been hurt in the development of these daily staples, but that’s ancient history.

You rarely think twice about jumping in an elevator.  Whether it’s a three floor trip up to the dentist or 50 floors to get to the office, as you walk into the steel box that will propel you vertically at upwards of 45mph and press your floor, the ensuing ride is almost always uneventful.  Besides, more often than not, multiple elevator trips are required to get where you need to be.

According to the National Elevator Industry, there are over 900,000 elevators in use throughout the United States.

While most trips are only four to five floors in vertical distance, or 40 some odd feet, it is estimated that elevators across the country carry a total of 18 billion passengers over 1.36 billion miles over the course of a year. Per a 2011 LA Times piece, “[Elevator] trips result in about 27 deaths annually, according to estimates from the U.S. Bureau of Labor Statistics and the Consumer Product Safety Commission. That works out to a fatality rate of 0.00000015% per trip." So, it’s safe to say that elevators are in fact the safest way to get from point A to point B.  Safer than walking upstairs to bed, and most definitely safer than hopping in the car.

I stepped onto the elevator of the Cosmopolitan Hotel in Las Vegas last week, selected my floor (50), politely shuffled into the back left corner, and assumed my position as one of ten riders for the trip.

I was in town for CES, Las Vegas’ biggest convention of the year, where the most innovative and futuristic technology from around the world is on display for all to gawk at. As the steel doors shut, a single arm came shooting through the space between the floor and the elevator bank.  It was my friend Vince. As the door closed, Vince sidled up next to me and we chatted about the previous night’s events — boring, flat, small talk due to the finite nature of elevator rides.  As we rose through the building, I glanced at the LED screen that displayed the floors we were passing — 44, 45, 46 — before looking back at Vince.

Then, suddenly the elevator shuddered, and emitted a noise I can only describe as the kind of sound you hear in movies when machines quit working.

We lurched to a halt, but the upward momentum of 10 passengers caused it to momentarily spring back for fraction of a second of weightlessness, and then another terrifying drop.  I felt the cables straining to keep us hanging as we all pushed down on the floor of what had suddenly become our steel prison.  An audible panic rose from the riders around me. This was the moment everyone dreads but doesn’t actually think will happen to them.

My senses suddenly sharpening, it obliquely occurred to me that while we were potentially dangling just above our deaths, Bruno Mars was still piping in through the speakers.

Now the elevator was completely still, and aside from the crooning, everyone was deathly quiet.  People began looking around at one another. I glanced up at the LED screen again to get a better sense of just how high up we were.  The display flashed then from ‘47’ to a big, blocky “OK." Uh, nope. Nothing about this was OK. The unnerving lurch we had just experienced had already thrown me off balance, and an uncomfortable sense of reality coupled with my queasiness began to set in.  I was stuck in a high-rise elevator, dangling 47 floors above the ground with no way out. Everyone immediately checked their phones: No Service.

The passenger closest the buttons began to frantically mash at them, looking for any form of feedback or recognition from our elevator overlords.

Would this analog reboot somehow get us moving, or trigger the doors to open? “Stop pressing those, please stop," a woman interjected, with an audible tinge of panic in her voice.  We were all looking around, exchanging glances, suddenly strangers no more.  Instead, we became marooned voyagers, lost with no bearings, with only each other’s (uncomfortably close) company.

My mind began racing through the potential scenarios as the increasingly warm and stuffy reality sunk in.  The most tragic one always pops up first:

“47th floor huh, wow that’s pretty high up.  Feels like we’re really putting a strain on those cables, there’s an awful lot of moving going on and an awful lot height between us and the floor…"

My chest continued to tighten ever so slightly; my breathing rattled.

Unfortunately, there was no choice but to calm down and let go of these thoughts, so I took a deep breath and rejoined the group.

In the minute or so that had passed since we stopped, it became apparent that the air conditioning stopped working, and that we were definitely not going anywhere soon.

“Hit the emergency alarm!" an older man in a blue button down shouted, but all it did was make an increasingly annoying metallic clanging sound that reverberated through the emptiness above and below us. A 20-something guy clad in a Hawaiian shirt (who had clearly hoped to spend his day partying in Vegas) kept repeatedly jamming the buttons, to no avail.

“Where’s that call button?" I finally mustered, and a portly bald man leaned over to inspect the control board.

It rang, and like a lighthouse in the mist, a slightly perturbed voice came on the line. “Hotel Security?" “Uh, yes, hi we’re in an elevator stuck on the 47th floor and we’re not moving." “Ok, let me look into that, I’ll call you back," the disembodied voice replied, followed by a click.

Disappointed and increasingly nervous, we decided to introduce ourselves. After three days of meetings and networking, the last thing I wanted to do was more talking, but it felt like the right thing to do. “This certainly gives a new definition to the term ‘elevator pitch,’" a man grumbled. Looking down at my watch, I noted it had been 15 minutes since the first (and last) contact with our testy security guard friend, so as a group, we press the elevator call button again. “Security?" “Hi, umm, yes we called about 15 minutes ago. We’re still stuck in this elevator and we never got a call back."  By now it’s officially taking every fiber of my being to keep cool and not lose it on the one person who can actually help us. “Yeah, there was a power surge in the hotel and the elevator has short circuited, we’re working with the elevator company now and will keep you updated. I’m sorry sir, the elevator company is working as quickly as they can," he says, nonchalantly, as if this is a totally routine thing that happens. But we weren't even close to the end of the ordeal yet...

No longer fearing imminent death, I did my best to focus on the potential upsides of an afternoon stuck with a bunch of strangers in blue button downs, no water, no AC, and no room to sit. I was hard-pressed to find any.

With nothing left, small talk continued, Vince and I laughed about the situation, and recounted a few stories from the night before. After another 20 or so minutes passed, the mood had shifted decidedly from novelty to inconvenience.  We’d now been stuck for over 30 minutes, not receiving any information from the elevator company, security, or anyone for that matter.

As with any group emergency situation, roles seemed to automatically get assigned.

There was the guy who pressed the button to contact security, the woman who was trying to get through to someone on her cell phone by holding it up above her head, and of course, the girl who aimed to capitalize on the insanity, doing her best to Instagram the disaster with #CES #funny #Cosmopolitan. Seemingly oblivious to the group anxiety, she repeatedly asked for everyone’s social handle so she could tag us to remember this wonderful adventure for all of time. Soon, people began to wonder what the hotel might offer us in exchange for the ordeal. “At least we’ll get a spa day out of this," said someone. “Forget that, I want a casino credit!" said another as we crested the one hour mark.

By now a low roar has consumed the small space, with people shouting over each other, conversations happening across the elevator.

“SHHH," shouts the guy whose job it is to speak on our behalf to the outside world — our designated disaster dignitary. Then, out of nowhere: “Hi, I just wanted to let you know that we should be done very shortly and we expect to have you out soon" said a tiny, tinny voice through the small speaker. “Does anyone require any medical attention?" the small voice asked. “Would that make a difference at this point?" I shot back.  I was tired, thirsty, late for meetings, and sincerely over this experience.

And then, miraculously, the doors just opened for us.

Floor 47, solid ground.  Two large, purple jacketed hotel security guards were there to help us off, although the elevator was perfectly flush with the ground.

Apparently, the whole time, there were only 6 inches of steel separating us from the hallway.

I find out later in the day that from a combination electrical surges from robot laundry folding machines, self-driving cars, sleep trackers and a thousand Amazon Alexas, the Convention Center lost power completely. The surge ended up causing trouble all across Vegas. Turns out that technology can fail even at the country’s preeminent technology convention. Hotel security took our names, room numbers and made sure everyone was ok. $25 drink credits were handed out. We said our goodbyes, exchanged the last bits of witty banter, and then hopped on a new elevator heading to our destined floors. Because… what else could we do?
20%

$9.85 $7.88
Buy Now
See More Deals
We hope you find these deals as awesome as we do! Just an FYI: we may receive a share of sales from links on this page