'Vampire Diaries' Star, Ian Somerhalder, Threw out His Wife's Birth Control Without Her Consent and People Are Outraged | 22 Words 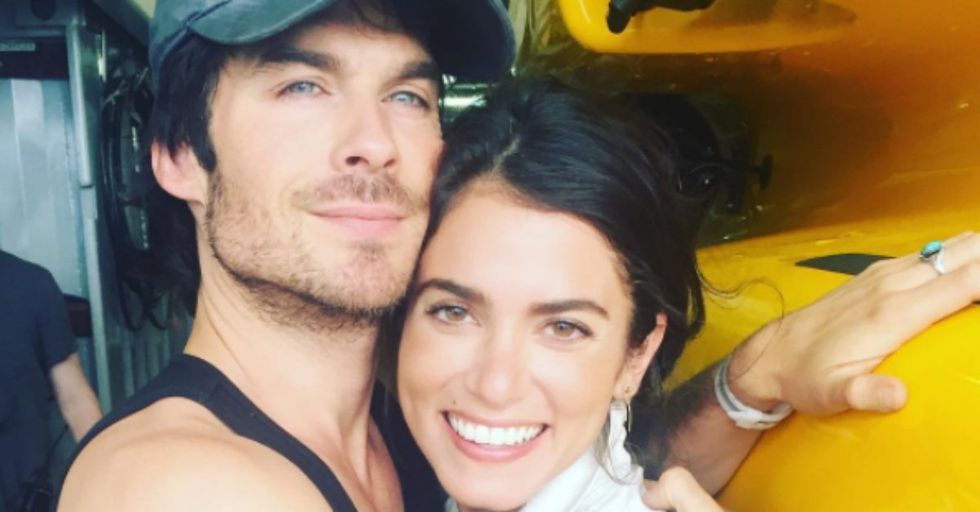 'Vampire Diaries' Star, Ian Somerhalder, Threw out His Wife's Birth Control Without Her Consent and People Are Outraged

It's appalling to have to say this in 2017, but women deserve control over their own bodies.

Vampire Diaries actor Ian Somerhalder and his wife, Twilight actress Nikki Reed, recently appeared on Dr. Berlin's Informed Pregnancy Podcast, where they chit-chatted about their relationship and pregnancy with their first child, Bodhi, to whom Reed gave birth in July 2017.

During the interview, Somerhalder casually mentioned throwing Reed's birth control pills away without her permission, as if it was a hilarious anecdote, as if it is acceptable to sabotage your own wife's contraceptive efforts, as if we live in a world where it's OK for men to decide the fates of the women in their lives.

Ooh, the Internet is enraged. And it should be.

Other than being the wife of Ian Somerhalder, Nikki Reed is an actress, screenwriter, and singer-songwriter most commonly known for her work in the Twilight films as Rosalie Hale.  She married Ian in 2015 after a split from her previous partner Paul McDonald.

You might recognize Ian Somerhalder from Lost or The Vampire Diaries.

The actor was known primarily for those two TV parts until he admitted to abusing his wife. We bet that'll be his most recognizable starring role from now on.

Somerhalder and Reed were first spotted together in July 2014, and their relationship moved extremely fast from there.

By January 2015, after only six months of dating, they were engaged. They tied the knot just a few months after that, in April 2015, and Reed announced she was pregnant on May 4, 2017. Hey, more power to people who move that fast because they are mutually in love and mutually making those decisions.

But how she got pregnant is the source of some pretty ridiculous (but warranted) controversy in the entertainment world.

The fact that Ian Somerhalder admitted doing something like what you're about to read below is shocking in its own right. It's also a sign that he clearly wasn't scared of the consequences or backlash.

But considering the new information about Somerhalder's coercive habits, the timeline is suspect.

In the podcast episode — before Somerhalder reveals his egregious act — he first reveals that he just knew he would marry Reed after only their second night together. Reed's reaction? "He told me the story later and I'm like, 'That's so presumptuous.'" Uh. Yeah. Sure, it can be romantic to fall instantly in love with someone. But Somerhalder seemed to be expressing this weird kind of ownership over Reed before they were even really dating, and it clearly only got more problematic.

This is basic love bombing. "We talked about kids before we were actually dating," Reed said on the podcast. This is just the beginning. Keep reading for the entire grotesque story.

And this is where it really starts to get appalling.

"You know it was interesting," Reed said. "I didn't know if I wanted kids. Some women grow up and just from the time they're a little kid, they just, they know things like what their wedding's going to look like or how many kids they want or if they're definitely going to be a mom, and I love kids and I wasn't sure I didn't want to be a mom, I just didn't...I didn't know."

That's a huge, larger-than-life decision for any woman to make, but it should be hers and hers alone.

After some more chatting, Dr. Berlin asked, "So, when did you really decide to have a kid?"

And that's when Somerhalder launched into this atrocious and upsetting answer...

She didn't know if she wanted kids, but Ian Somerhalder performed this clandestine act nonetheless? That's not just unethical. That could be illegal and get him sent to jail.

Reed was actually the one to bring it up.

"Oh yeah, when you threw out all my birth control pills," she said. "That was also presumptuous." Somerhalder then goes on to explain the story.

You'll often hear of women switching birth control for a number of reasons.

But normally it's THEIR choice due to medical factors, not the decision of their partner, made clandestinely without consultation. The fact that it's joked about in a podcast between husband and wife after the fact does NOT make it ok. But that's exactly what happened.

Apparently, Somerhalder and Reed travel to Barcelona a lot, and on this particular trip, they met up with a couple, best friends of theirs, in Spain.

On that trip, Somerhalder explains, "We decided that we wanted to all — we wanted to have children together, and it was just time." The way he says it, it's clear that both couples were talking about having children at the same time. He thought it'd be fun if they were all pregnant together. Sound sick? It is. Learn more about went down from the couple themselves.

It's a little hard to believe that any human, famous or not, would swap out a woman's birth control for the sake of getting pregnant with some friends of theirs.

It's also hard to believe that Somerhalder's talking about this like it's no big deal and that his wife isn't more upset with him for what's a betrayal, plain and simple. However, the responses don't let Ian off the hook quite so easily, thank goodness. People are PISSED.

That could be a nice idea, if all four parties are actively willing.

But Somerhalder didn't wait for Nikki's approval. "Unbeknownst to poor Nikki, she didn't realize that I was gonna go in her purse and take out her birth control and...by the way, it was the beginning of the pack, so I had to pop all of those suckers out..." Yes. He did this. Appalling.

Eventually, the female cohost, midwife Blyss Young, asked Reed how she felt about what Somerhalder did.

Reed laughs and says there's a photo of her, but then Somerhalder jumps in with, "There's a six-minute video where she's freaking out." Reed responds with, "There's a video? Why are you always taking videos of me and I don't know it?" Somerhalder says, "I was in the video, you nerd! Lindsey took the video with my phone! ... What's so cool is there's this video of me with his handful of these little pills. [Lindsey's] sort of interviewing Nikki, like 'How are you feeling?' and I went like this, and Lindsey so expertly put it on slow motion, and you just see them...and they slowly go into the toilet." "Reed responds, "I've never seen this. Was I drunk? Was I coherent?" You can listen to the whole podcast episode here. This part of the conversation begins approximately two minutes in.

It's sort of presented as a "funny ha-ha" moment, but Reed is clearly not entirely on board with what happened.

Even though Reed was there, even though she seems to be sort of laughing about it now on a podcast, there is no scenario in which it is acceptable for a man — even if that man is your husband — to sabotage your birth control. The entire Internet exploded with reactions. People are livid...

The manipulation is abhorrent.

Somerhalder's insidiousness cannot be ignored. Time and time again, he's proven he does not listen or take his wife's feelings into account, and then he went ahead and flushed a month's worth of contraception down the toilet when they were drunk and he decided he wanted to have children? Not OK.

It's extraordinarily upsetting that seemingly no one has said to him that what he did to his wife is abuse.

Destroying Reed's birth control stripped her of agency over her own body. It violated her right to control her own life. The end. No other way to spin this story. Whether Reed realizes it or not — and it sounds like she might not based on her recent tweets — she has been manipulated by this man for his own selfish desires, and it's horrifying to realize.

Reproductive coercion is a real problem, and it is a form of abuse.

Just because an instance of this sort of controlling behavior was laughed off on an episode of a podcast does not mean that it's not a very real problem in abusive relationships. It cannot be swept under the rug. It cannot be normalized. Women like Nikki Reed deserve better.