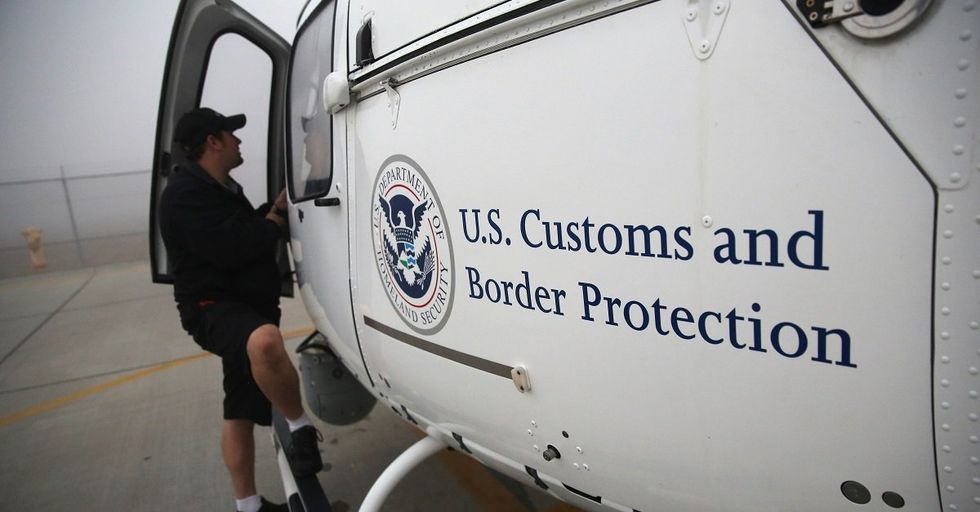 U.S. Border Patrol officers set up a checkpoint to check the papers of everyone on a route to a local hospital. Among those unable to produce their papers were the parents of a 10-year-old girl with cerebral palsy who was traveling in an ambulance to emergency surgery.

Her name is Rosa Maria Hernandez, and though they allowed her to have the surgery, she was quickly detained immediately afterward and won't be allowed to see her family for weeks, or possibly even months.

Rosa Maria Hernandez was brought to the United States by her parents when she was only 3 months old.

They sought to get better medical care for her that they couldn't afford in Mexico. The family lives in Laredo, Texas along with her grandfather and cousins who are US citizens. But it was when Rosa Maria needed to be transferred from a hospital in Laredo, to one in Corpus Christi for an emergency surgery that things went haywire.

The ambulance transporting her was stopped by US Border Patrol.

And when the officers discovered Rosa Maria didn't have official papers, the agents followed her and the cousin who was transporting her to the hospital. There, they physically followed her from room to room, stationing themselves as close as possible at all times, ready to arrest the sick and disabled child as soon as she'd received treatment.

After the surgery was complete, agents took Rosa Maria away.

A 10-year-old girl with cerebral palsy has been detained by federal immigration authorities after undergoing surgery https://t.co/xfnbpLAslx
— The New York Times (@The New York Times)1509014712.0

They transported her 140-miles away to a juvenile detention facility in San Antonio. Because she was traveling to the hospital with her cousin, a US citizen, she was process as if she were an unaccompanied minor crossing the border.

And Driscoll Children's Hosptial was already too risky a place for her parents to travel to for treatment.

Her parents had sent her with her cousin thinking her cousin's US Citizenship status would help them get past the checkpoint. Others had already been arrested trying to take their children to the hospital for care, including this couple who were arrested while their 2-month-old son awaited surgery.

Some support these kinds of hard-handed immigration enforcement tactics.

Noting that the cost of treating disabled or ill children can be very high, some anti-immigration activists seem to think we should work to make sure these children are unable to get treatment in American hospitals. After all, why spend money treating sick children when we could spend it flying the treasury secretary to a better view of the eclipse. But others were outraged...

Others are understandably outraged about the aggressive pursuit of a disabled and ill little girl.

@nytimes How can this happen in America? Have we descended into a godless society? Where is mercy? Where is charity? Have we no pride?
— Dan Harbaugh (@Dan Harbaugh)1509016247.0

Though the president's administration has said they're looking to focus on the "bad hombres" coming across our borders, many people are realizing that this actually means, well, them. After all, we're pretty sure a 10-year-old with cerebral palsy isn't spending her weekends running around with MS-13. And even though her grandfather and cousins, who are all US Citizens, have offered to sponsor Rosa Maria in this country, that request was denied and the little girl may still find herself deported alone.

Sick children and their families are probably being targeted because it's easy.

It's frankly more convenient for the Border Patrol to catch the most vulnerable people at hospitals, homeless shelters, or courthouses, something the Trump administration has granted permission for them to do. It's much harder to catch and deport hardened criminals, who are already avoiding law enforcement anyway.

Of course, this is the kind of policy that will always find defenders.

@nytimes I bet Trump supporters will lie to themselves into thinking this little girl somehow "had it coming"
— David Baer (@David Baer)1509015809.0

As cynical as a lot of us feel these days, surely even those who were eager for a crackdown on immigration would be horrified by the arrest of a sick child. When we watched all those mothers of people killed by immigrants at the Republican National Convention, surely we weren't thinking a 10-year-old who was in surgery was part of that problem? Surely these good American Christians have room for little girls like Rosa Maria in their hearts?

There seem to be plenty of people who think a disabled 10-year-old who was brought to America as an infant should pay for this. These are people perfectly happy to leave a child fresh from surgery alone and scared in a juvenile detention center while we make a special law for her in Congress, apparently.

Some are simply starting to lose their faith.

It's very hard to cheer for a nation that treats children this way, regardless of where those children were born. And while laws are important, it's more than a little strange to watch a political party that's usually decrying big governments cheering for one that sets up check points and detains human beings indefinitely on their way to the hospital. Can this really still be called the home of the brave?