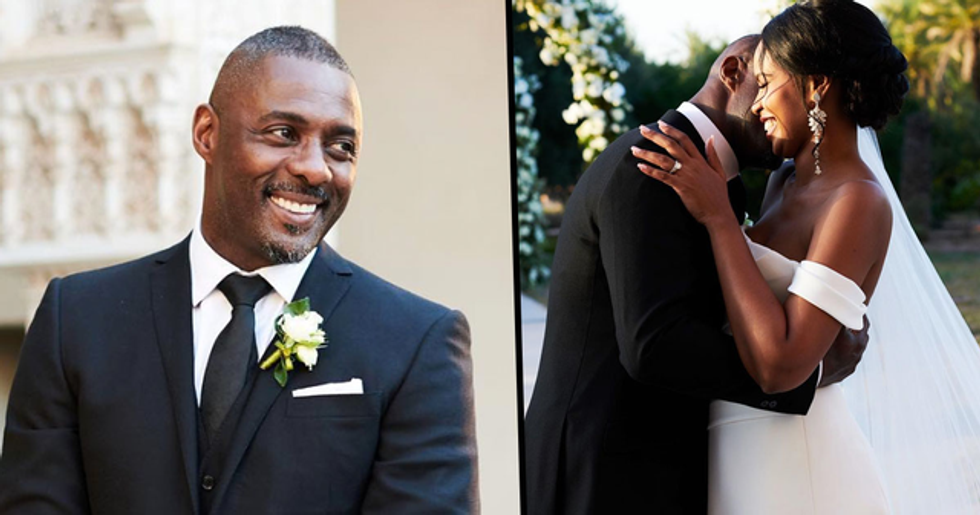 If you're trying to think of one of the nicest actors working today, you'd be hard pushed to do better than Idris Elba. The star of HBO's The Wire and BBC's Luther is known not just for his incredible acting talent, but for being an all-around great guy. In fact, he's one of the foremost on many people's list of celebrity crushes - and with good reason.

But this weekend, hearts all around the world were broken as Elba married his long-term girlfriend, model, Sabrina Dhowre, in Morocco - in the stunning Ksar Char Bagh hotel in Marrakesh, no less! And unlike many celebrity bashes, the wedding was kept totally under wraps, until the bride and guests began sharing images after the event that is.

We've got all the best pictures from the incredible celebration - plus news on a pretty high-profile wedding gift. For all that and more, just keep scrolling!

Idris Elba is a man of many talents.

Born in London, UK, in 1972, the star has made a name for himself, not only as an actor, but as a director, producer, musician, DJ, and rap artist.

And one thing that people often point to when discussing Elba's acting proficiency is just how versatile the star is.

He's perhaps most recognized for his role in The Wire.

His eponymous role in the crime drama gained him much popularity, and the show was a huge commercial and critical success.

Elba also took on the huge task of portraying icon, Nelson Mandela, in the biopic, Mandela: Long Walk To Freedom, showing how varied his performances can be.

And there's been plenty of comic relief, too.

In 2009, he played Charlers Miner, the new regional manager (and workplace heartthrob) at Dunder Mifflin in NBC's The Office.

He's not just an actor, either.

Elba is an eminent musician and DJ, performing gigs under the moniker DJ Big Driis. He's also released music in the R&B genre.

Because on top of his huge amount of professional success, he seems to have managed to remain a really nice, down to earth guy.

Elba has had a similarly busy personal life, too.

He was also married a second time.

In 2006, Elba was wed to lawyer, Sonya Nicole Hamlin, for just four months.

He's had other high profile relationships, too.

Between 2014 and 2016 he dated Naiyana Garth. Here, the pair were pictured together at the British Academy Film and Television Awards in May of 2016.

His first, Isan Elba, was born in 2002 and is currently sixteen years old. Here they are together at a Formula 1 race in Paris, in April of 2018!

Elba also has a young son.

Winston Elba was born in 2014 and is currently four years old. Here they are together at that same event, last year.

It's safe to say, Elba has had a lot of love in his life.

And it seems that he's been lucky enough to find it again, this time with model, Sabrina Dhowre. The pair met and began dating in 2017.

There's no denying they look amazing together.

Here's the couple pictured at a Burberry show in London in February 2018.

And it appears that the couple are pretty serious about each other.

It's just been announced that the pair wed on April 26th in a secret ceremony in Marrakesh, Morocco. How romantic!

Images of the adorable ceremony have since been released.

Here's Elba, looking just as dashing as you'd expect, in a custom made suit by Ozwald Boateng.

The couple are seriously cute.

This image of the pair snuggling up in their amazing outfits in the Moroccan sunshine is enough to inspire envy in anyone.

Her makeup was expertly applied (a process which was shared online) by celebrity makeup artist and MBE, Charlotte Tilbury.

The location was almost as stunning as the bride.

The couple tied the knot at the Ksar Char Bagh hotel in Marrakesh, the capital of Morocco - a truly breathtaking setting.

Dhowre had not one, but two, amazing dresses.

During the actual ceremony, Dhowre donned a more pared down, off-shoulder gown, but she later changed into a fancier dress embellished with gems and lace for the party.

And it sounds like it was quite the party.

The whole ceremony took place over three days, with an extravagant dinner on the wedding's eve, then a post-wedding festival.

She claimed that it had been the "best day of [her] life." New husband Elba commented on the post, saying "I love you Sabbi."

And for a wedding involving Elba, you know music was a big feature.

It's reported that Nigerian music star, Davido, surprised the happy couple with a post-wedding performance.

But there was one notable absence. Elba has long shared a friendship with British royal, Prince Harry - here the pair are in 2013.

In fact, Dhowre and Elba attended the Royal Wedding!

In May of 2018, the two celebrities were amongst a whole host of famous faces invited to celebrate the love of Prince Harry and actress, Meghan Markle.

But Harry and Meghan had a good excuse.

Meghan is currently heavily pregnant with the pair's first child, and was thus unable to fly out to the luxurious wedding celebrations - and Harry dutifully stayed by her side.

But the pair kindly sent along a gift.

And what kind of gift does a prince send to a wedding that he had to miss? Well, you can bet it's something pretty spectacular!

It's reported that the pair went with a work of art.

According to Harper's Bazaar, Harry and Meghan chose this unique print by the Connor Brothers, which apparently retails for around $9,000!

And we're sure that this isn't the only exciting gift that the pair received.

Although that really isn't the point. The biggest gift is the love and commitment that they've got for each other - and we say a huge congratulations!