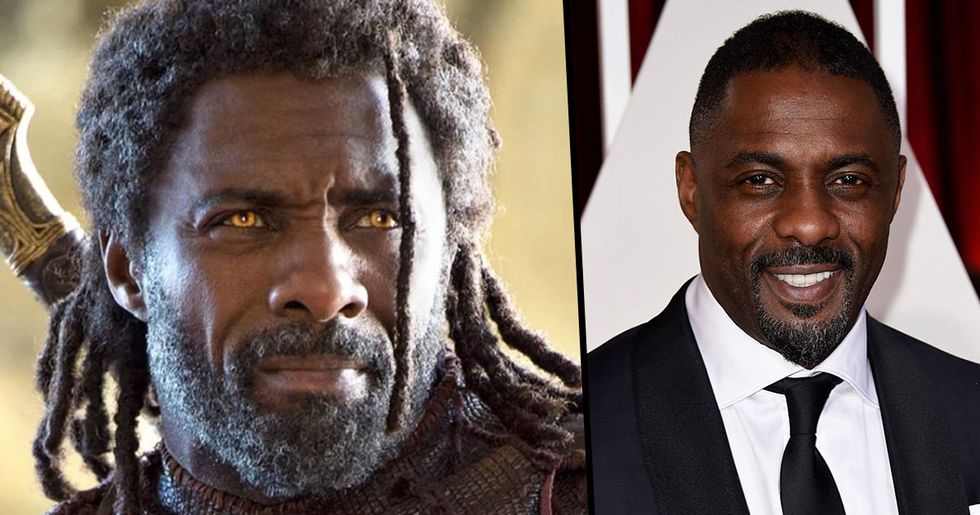 Idris Elba, star of award winning TV series Luther and The Wire, has recently posted a video voicing his discontent at having lost his facial hair. Elba was told to remove his beard and moustache for his role in the upcoming film Cats - a cinematic take on the famous Broadway musical inspired by T.S.Eliot's Old Possum's Book of Practical Cats.

The revered Hollywood sex symbol seems to lament the loss of his facial locks, posting a video in which he says, "there's a reason black men love facial hair... it's a kind of shape thing... "

Idrissa Akuna Elba was born and bred in Hackney, on the east side of London.  Hackney is a traditionally deprived area, that's seen a swathe of gentrifications in recent years.

Elba was the only child of parents, Eve and Winston Elba. Winston was from Sierra Leone, while Eve was Ghanaian - the two married in Sierra Leone before moving to the UK.

Idris went to school in Canning Town, where he became involved in acting and music.

Elba soon drew his attention to DJing, helping his uncle with his wedding DJ business before moving on to start his own DJ company with his mates.

Thanks to a £1,500 grant from the Prince's Trust, Elba won a place on the National Youth Theatre - a prestigious British organisation for aspiring actors.

Idris' first TV role was acting in murder reconstructions for Crimewatch on BBC one. With little pay to show for it Idris need other work to support himself.

He did this by working various short term jobs, like tyre fitting, and cold call advertising, even working the nightshift at Ford's Dagenham plant.

Then came something of a breakthrough. Elba landed a part on Bramwell a medical TV drama set around 1890s England.

Suddenly the parts were rolling in: Elba caught a supporting role on popular crime show, Law & Order. And off the back of that...

Then came The Wire...

The hard hitting, erudite gangster Stringer Bell, remains to this day one of Elba's best played and notorious roles. The Wire won multiple awards and rocketed Idris Elba to stardom.

Elba's cameo on the US office is really something. He plays Charles Minor, an outside hire called in to discipline the workplace - much to the dismay of Steve Carrell's Michael Scott.

Idris soon got the title role in a Hollywood film called Daddy's Little Girls,  a blue-collar mechanic who loses his kids and falls in love with an attorney that helps him get them back.

Elba stared alongside pop-queen Beyonce in the film Obsessed. A... problematic... film in which he's caught between loving wife Beyonce and stalker Ali Larter, culminating in 10 minute, leery 'cat fight' between the two competing women.

Elba portrays Nelson Mandela in the 2012 production 'Mandela: the Long Walk to Freedom' - earning him a nomination for 'best actor' at the Academy Awards.  Here he is pictured above next to Winnie Mandela.

I have no idea how this will look... But director Tom Hooper is currently constructing a filmic reshuffle of the hit musical Cats. Casting Elba as Macavity, the mystery cat.

Elba has to shave off his beard. Here's a video of him sounding not to pleased about the new look.

But it's not just acting...

Elba actually is also heavily involved in the world of music.

Elba, a big longstanding follower of 'hip-hop' music production, appeared in a music video for the grime rapper Giggs in 2010.

He also opened for godmother of pop, (B**** I'm...) Madonna during her 'Rebel Heart Tour' in Berlin.

As a first generation African immigrant, Elba presented the series Journey Dot Africa with Idris Elba on BBC Radio 2, which toured the rich tapestry of the continent's music cultures.

Idris, as any Londoner should be, is a fully indoctrinated soccer fan - he supports the North London team, Arsenal FC. He also hosted The Best FIFA Football Awards 2017.

Idris has recently become engaged to girlfriend Sabrina Dhowre, who he proposed to at a screening of...

Yardie is Elba's directorial debut. It tracks the life of a young Jamaican immigrant moving from Kingston to 1980s Hackney.

Along with his career in acting, his love of sport and his music production work - Elba has involved himself with a number of political campaigns throughout his life.

Elba campaigned heavily for the Britain to remain in the European union during the 2016 referendum.

And during the Ebola Crisis

Elba collaborated with Parliament in their efforts to rid the west coast of Africa from the grip of Ebola.

In 2009, the Prince's Trust named Elba as their Anti-crime Ambassador.

This may come as no surprise... but to cap it all off, Idris was named 'Sexiest Man Alive' via The Tonight Show Starring Jimmy Fallon.