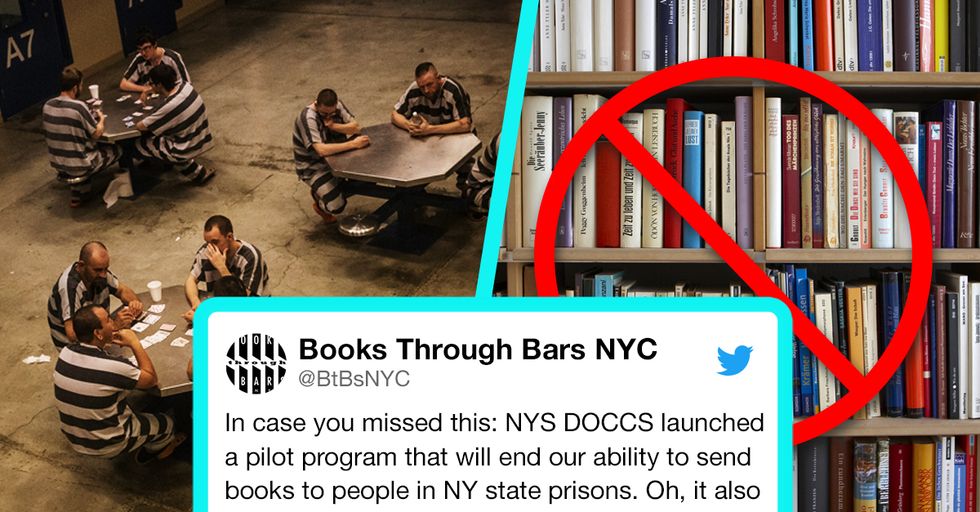 If We Only Allow Prisoners to Read Coloring Books and Erotica, They'll Never Reintegrate

Prisons are supposed to be a place where people who have committed crimes can go to be rehabilitated before being reintroduced to everyday life among the rest of us. Unfortunately, many prisons around the U.S. aren't providing adequate rehabilitation services to their inmates.

In fact, over the past few decades, prisons have been transformed into profit centers that benefit more from the continued incarceration of their inmates than from their rehabilitation.

In New York, prisons have rolled out a new program that severely limits the items an inmate is allowed to receive in packages from their family or friends. Why? Because they stand to make some money from it, of course.

For those who have loved ones in prison, sending packages is a fantastic way to show that you're thinking about them, even while they're away.

And receiving those packages is obviously a great reminder that you've got folks waiting for you on the other side. It's not difficult to imagine that getting mail could be a definite highlight in the days of some inmates.

In New York State prisons, it's been customary for people to send care packages to inmates, particularly around the holidays. Until recently, that is.

Which would be one thing if those five vendors were selling a wide variety of books. But they're not. They're selling coloring books.

Twenty-four different coloring and drawing books, to be exact. Those aren't the only books that are available, but the whole list doesn't look much better, unfortunately.

Here are the books inmates can now receive, according to the new directive:

They can choose from five sex "novels," 14 religious books, the aforementioned 24 coloring or drawing books, 11 how-to books on things like chess or drawing, one dictionary, and one thesaurus. This isn't a partial list. This is the entire library available for purchase to inmates in New York State prisons under the new directive. It's absolutely deplorable. And it doesn't stop there! There are also a bunch of restrictions placed upon the food entering prisons...

Yep! According to the new directive, inmates aren't allowed to receive fresh fruits or veggies either. You know what they can receive, though? Processed junk food. It's available through — you guessed it — a preapproved list of vendors. It's just what our prisons need, right? More money being pumped into an industry that is already worth millions of dollars, and less nutrition for the people in prison.

As this person points out, a lack of access to quality literature is awful for inmates.

Access to books should not be a privilege to those of us who are not incarcerated. In the 21st century, there is no excuse for this. Of course, that's not to say that there's anything wrong with the coloring books and how-to books the prison vendors are providing, but they're not enough. They're nowhere near enough.

Books Through Bars NYC is a volunteer-run organization that sends free, donated books to incarcerated people throughout the U.S.

They have been sending books to people for more than 21 years. But because of the new directive, they will no longer be able to send books to incarcerated people in New York. Every week, Books Through Bars receives hundreds of book requests from inmates. Their requests cover a wide range of reading material, everything from "dictionaries to novels to cultural histories to medical texts" — and the DOCCS is taking that away. They contend that limiting inmates' access to quality literature could result in an increase in inmate suicides, which are often a result of lack of intellectual stimulation.

It really makes you wonder: How can an organization that purports to rehabilitate criminals consider themselves successful if they're withholding fruits, vegetables, and books from the people who may need them most?

@BtBsNYC This is disgusting. They literally want to imprison their minds and their bodies. Anything we can do to help?
— LaLa (@LaLa)1514933355.0

It's almost as if they're much more concerned with turning a profit than they are with actually helping to rehabilitate inmates. Weird how that works, right? Luckily, all hope is not lost.

Books Through Bars has started a postcard writing campaign to try and roll back the new directive.

If you're so inclined, they are urging people to write to Governor Cuomo and to the DOCCS in order to get the directive repealed and get books (and fruits and veggies) back into the hands of people who need them. You can also sign their petition HERE. In the meantime, please keep in mind that any lightly used books you'd like to donate can easily be donated to organizations like Books Through Bars or, in some cases, to prisons themselves.