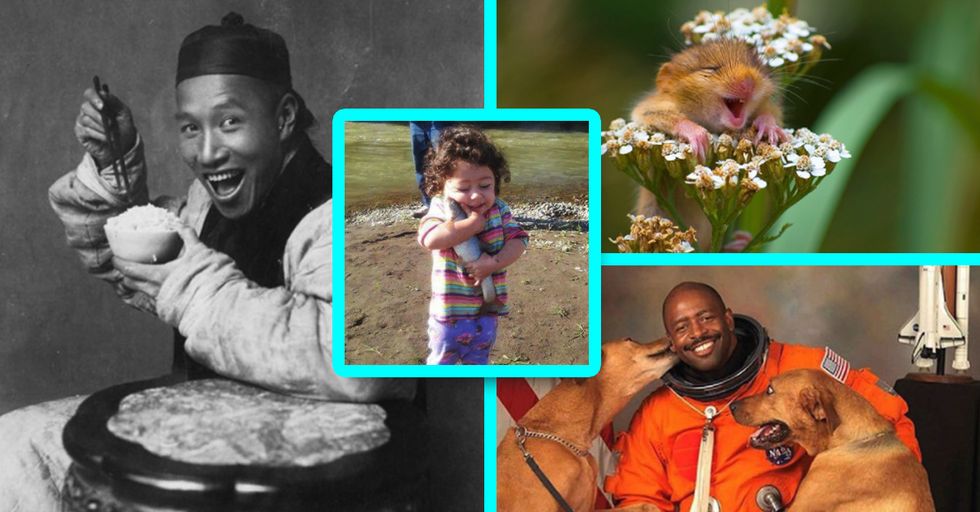 If You Can Make it Through All 20 Photos Without Smiling, You Probably Have No Heart

Having a rough day?

Well, get ready for all your sadness to disappear! Here are the 20 happiest photos the Internet gods have blessed us with.

If you can make it through the entire list without smiling, you should probably see a doctor about your missing heart.

Look at that sense of awe and wonder! Don't pretend like you'd have been able to react any other way.

This guy is SO happy to be eating rice.

What's even cooler is that this picture was taken sometime between 1901 and 1904. Some things never change. (You get this excited about rice, right?)

This little pup thinks the whole parade is for him:

And you know what it? It totally is. Just look at him. He obviously deserves an entire parade.

Don't be fooled. This squirrel knew exactly what he was doing.

Here's a guy who's really happy with the giant onion he grew:

His name is Peter Glazebrook and his onion weighs just over 18 pounds. And if you think he's happy with that onion, just wait 'til you see him with some cauliflower...

See what I mean?

All right, pack it in, folks. This is the happiest photo ever.

Have you ever wanted to be a tiny little dormouse? If not, I bet you do now!

Yup. His dogs Jake and Scout totally photobombed his official NASA portrait. They're obviously made from The Right Stuff.

Hey! Have you ever seen a quokka? This is what they look like:

Yes, that is a real animal that exists in real life and not just someone's interpretation of what a real-life Pokémon would look like. They are perpetually smiling and they're amazing and why do we even have other animals?

Been there, done that. Those stethoscopes sure can be chilly! This next picture is of an adorable little girl and her best friend...who just happens to be a camel...

Look! They're both so happy!

I don't think I've ever wished to have a camel best friend before, but that is 100 percent what I am wishing for right now. I think I'll call him Claude.

Here's another little girl pictured with her animal best friend:

Oh man. Would you rather have a fish or a camel for your best friend? Both of these little girls look like some of the happiest people on the planet! (Although I have to imagine the fish in this picture is slightly less cool with the arrangement.)

What's that? You need another picture of a little girl and a cute animal?

You got it. Everyone should have a friendship this pure, right?

There's an amazing story behind this photo.

This little boy is Harold Whittles. He was fitted with his first hearing aid in 1974 at the age of 5. This picture captures the first time he ever heard sound.

"Can I touch your hair?"

Something tells me this picture is not as likely to happen with the current administration... This next picture of Obama and the Pope is the stuff happy dreams are made of!

Gotcha! It's not the real Pope. It's a baby.

And honestly? The real Pope is pretty cool, but this baby is hilarious.

The Oregon Zoo took one of their Asian elephants (Chendra) on a walk to meet some of the other animals.

Here she is with a sea lion named Gus. I don't know which animal I'm more jealous of.

We don't often see people smiling and laughing in historical photos like this one, but it's absolutely lovely, no? It's incredible to see the ways in which we've remained similar over the years (even while also experiencing so many changes).

Did someone say "Pit bulls in Pajamas"?

OK, maybe you didn't say it, but here they are anyway. You're welcome.

Look at how happy they are! Everything in this picture is a pure delight.