If You See This In a Public Bathroom or Hotel, LEAVE Immediately and Call 911 | 22 Words 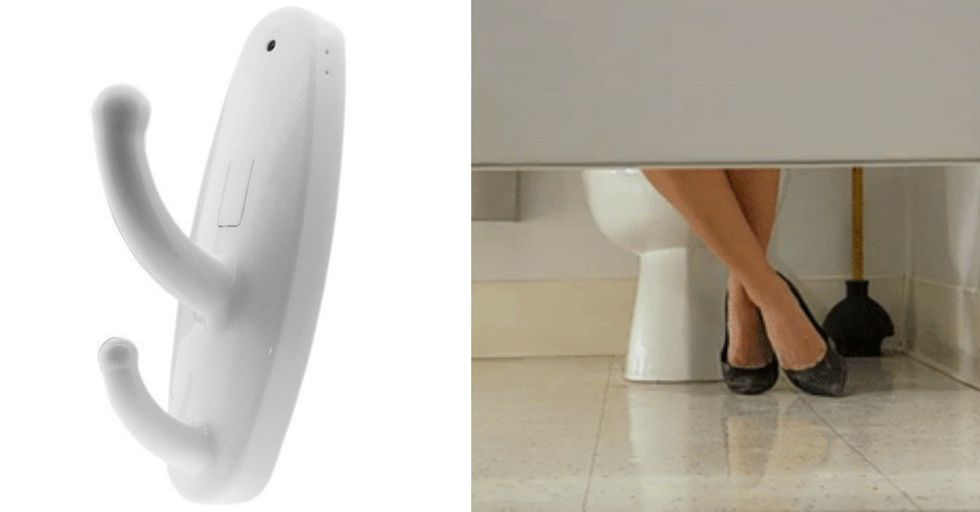 If You See This In a Public Bathroom or Hotel, LEAVE Immediately and Call 911

We all use public bathrooms or stay in hotel rooms, and not to scare you, but do you really know who is watching you while you're going about your business?

Technology moves at the speed of light with new products and gadgets meant to make our lives easier, but there is also a dark side — one you might not even realize you're seeing until it's too late. There are people looking to prey on others by engaging in criminal activity, and it can be as easy as installing a hook.

While these may look like ordinary hooks, they're actually meant for a far darker purpose.

Notice the double hooks, which are not usually the standard in coat hooks. Anything look a little off to you?

They can be easily attached to any wall in the home or places like a public bathroom, and you probably wouldn't even give them a second thought.

But be warned — if you see this in a public bathroom or a hotel room, please leave immediately and call the authorities. So what's the big deal about an innocent-looking hook?

Because hidden inside this wall hook is a tiny camera that records people in the bathroom, hotel rooms, and change rooms.

Women in particular have been recorded while in the shower or changing without their knowing. They're privacy is completely violated, and they aren't even aware of it.

Doesn't it make you think back to every hotel room you've ever stayed in and wonder if you were secretly being watched? Shockingly, these sneaky little cameras are easy to find and even easier to install.

The camera comes with a charger and transfer cable, and the hook is like any other found at a hardware store.

The camera records video and audio through the small hole at the top. Often times, the footage from the camera end up on the Internet for the world to see without the knowledge of the person featured in it.

That hole is a giveaway that something is NOT right with the hook and that criminal activity could be going on.

But it gets worse. Want to know what makes it even creepier?

These wireless cameras can be recorded remotely, and the wireless remote control works through walls.

So someone could be watching the footage as close as the next room. That's enough to make you never want to check into a hotel again.

One thing you might notice is that it's set somewhere in a room that is out of place.

For example, if you see a hook in a place that doesn't make sense for a hook to be, trust your instincts. Sometimes you can see the light when the camera is recording. That's your sign to get out of dodge and call the police immediately.

What makes this so scary is that these spy camera hooks are accessible, inexpensive, and easy to purchase by criminals.

While they were originally created to increase security around your home, in the hands of the wrong people, they can make it easy to prey on unsuspecting victims.

If you know that coat hangers can contain cameras and are extra vigilant when traveling or using a public facility to undress, you’ll be able to protect yourself from unwanted snooping.

Check out the video below for more info on this unsettling trend.

Sadly, it seems to be getting more and more common by the day, but if we spread awareness that this is going on, we can help to shut it down. Because no one should be able to take your privacy away from you.