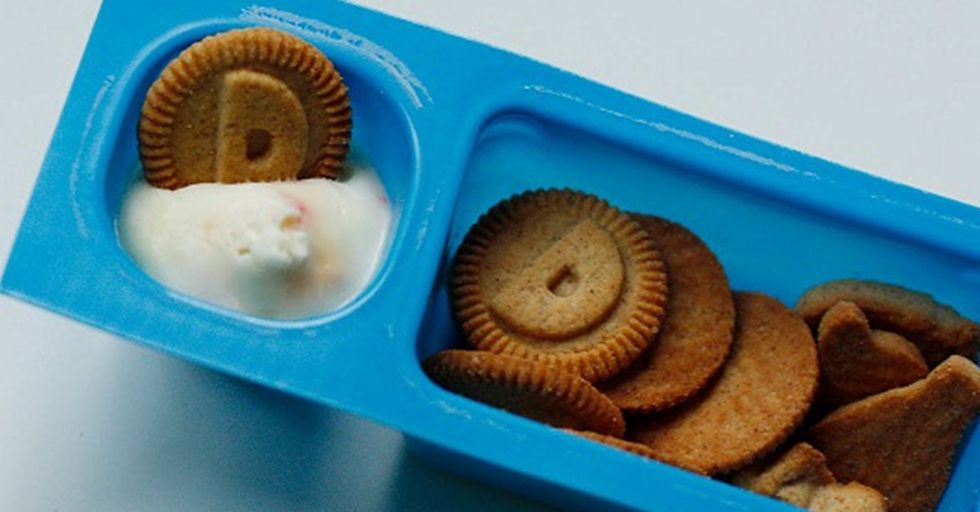 If You're Under 26, You'll Think We Made Up These Foods

You can identify a generation by a number of different things.

Technology, for instance. Millennials remember logging on to the Internet on the family computer via dialup. They transitioned from having a Walkman to wishing for an iPod (or a Zune!),  and their school's computer labs were filled with clunky iMac G3s.

You can also define a generation by the headlines. Millennials grew up in the era of Bill Clinton's election (and impeachment), the Y2K problem, and September 11, 2001.

But today, we're going to define the Millennial generation by something else. Food, to be specific. As you scroll through the following images, you'll instantly be transported back to your school's cafeteria, where you opened your lunchbox and rejoiced to find one of the foods shown here. If you were lucky, that is.

However, if you're not a Millennial — anyone under the age of 26 or thereabouts — you might just think we made these foods up completely.

You can still find Handi-Snax at the grocery store these days, but they don't have the spreading stick anymore! I would argue that that spreading stick is the handiest part of the whole arrangement, so they should probably change the name.

Anyone else remember Miner's Gold Nugget Gum? : nostalgia from nostalgia

It basically turned to grainy dust after approximately 15 seconds of chewing, but those 15 seconds were fun they lasted.

Nestlé Quik (in the metal container)

Sure, you can still buy this chocolatey powder (although it goes by "Nesquik" these days), but you can't enjoy the distinct pleasure of prying the lid off with a spoon.

Just looking at this photo is making my jaw hurt. In a good way, though.

This picture also makes my jaw hurt. Did anyone else find it absolutely exhausting to chew this giant gum?

I don't know who decided making candy cigarettes was a good idea, but, like...they could have at least made them taste good, right?

Doritos are very good. Doritos 3D were too good. That's why they took them away.

Each package featured a fruity rope wound into a different shape. Look, it was a simpler time.

Bring these back, you cowards! Never has there been a better peanut-butter-flavored food in the history of time.

Come on. You knew Dunkaroos were going to be on the list, right? We couldn't have a list without Dunkaroos.

These were great because you could pretend to yourself that they were healthy (granola!) but they were really just an excuse to eat more candy.

They did some pretty amazing things with yogurt back in the day. Yogos may have been the most impressive.

The root beer ones tasted just like root beer. Also, such a good pun!

Why struggle to consume a full-size Butterfinger bar when you can simply pop the BB's in your mouth? This is another snack I'm passionate about bringing back.

You haven't lived until you've popped like 10 of these into your mouth all at once on a dare. Me? I've lived.

I'm not saying every snack has to have The Best Name of All Time, but...Fruit Wrinkles? Really? That's what you went with?

Like chips. But sticks. I don't know. It was a weird time, as we've already established.

Out of all the foods we could have focused on improving, they went with ketchup. Ketchup! It was already perfect, but they just had to make it "better."

If you didn't instantly start humming the "Baby Bottle Pop" song from the commercial as soon as you saw this picture, you're probably too young to be on the Internet.

Great cereal, or greatest cereal ever? (Besides Rice Krispie Treats cereal, that is.)

I remember when these came out and I thought they were chocolate-covered potato chips. They were not. They were just chocolates shaped like chips. Kind of a disappointment, if I'm being honest.

Lucas was huge when I was in elementary school. It came in several different flavors and the preferred method of consumption was to dump some of the salt into your hand, lick your finger, stick it in the powder, and then suck on your finger. I know. We were weird.

There was also this type of Lucas, which you just licked straight from the dispenser. Now that I think about it, so many candies of my youth involved licking something in order to eat it. Fun Dip. The aforementioned Baby Bottle Pops. This stuff. It's honestly a little concerning.

I had a friend who hated the blue pieces. They were a good friend to have around.

They still make a Trix yogurt, but the two-flavor swirl is no longer available as far as I know. (Please let me know if I'm wrong! I do miss it so!)

Powdered candies were also a big deal. Why? I have no idea.

Yet another candy you had to lick from its container! So weird.

Before all the various pieces had to be separately packaged. Those were the days.

Yes, I know you can still eat Gushers...but you can't eat them while feeling a little worried that your head is about to become a gigantic fruit. Share this with someone who grew up in the golden era of foods!